Is a Cat Parasite Making You Crazy?

Humans, wildlife and domestic animals are often intimately linked through shared infection. Nearly 70% of emerging infections in humans involve non-human hosts or vectors, while growing evidence indicates that human infections are increasingly spilling into wildlife populations (e.g., measles in gorillas, tuberculosis in African elephants). These observations underscore the importance of research to systematically tackle the pathways of transmission for multi-host pathogens and identify their consequences for public health and conservation.

A prime yet surprisingly understudied example involves the coccidian parasite Toxoplasma gondii, for which cats (both domestic and wild) function as the only known definitive hosts. However, this parasite can also infect hundreds of species of endothermic vertebrates, ranging from bats to beluga whales, making it one of the world’s most successful parasites. While often considered 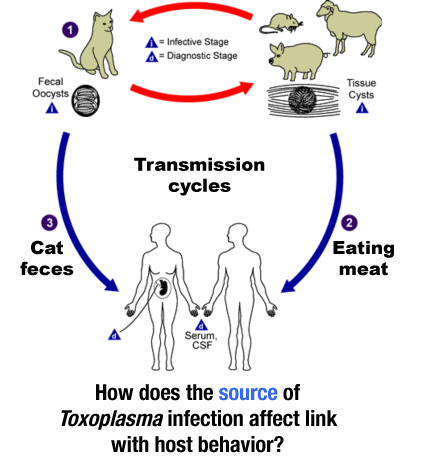 benign in humans, acute toxoplasmosis can be fatal for immunocompromised patients and lead to birth defects when acquired by pregnant women. Interest is also growing in the subclinical, behavioral effects of T. gondii infections, for which encysted bradyzoites in the brain have been linked to patterns of human neuroticism, suicide risk, car accidents, and schizophrenia. In laboratory and wild animals, T. gondii is associated with increased attraction to cat urine by rats, greater vulnerability to traffic collisions in Australian marsupials, and increased risk of shark attacks in sea otters.

Despite a long history of research on T. gondii and frequent coverage in popular science, fundamental questions regarding the ecology and epidemiology of this cosmopolitan parasite are poorly understood. For instance, diagnosis of T. gondii generally relies on serological assays that offer little insight into the route of infection. Thus, the relative importance of human exposure to domestic cat feces versus consumption of undercooked meat in driving patterns of infection is often unclear, and may vary regionally or even help explain observe variation in the link between infection and alterations in human behavior. Moreover, the transmission pathways linking humans, wildlife, and domestic animals remain largely unexplored.

Our group at CU Boulder is working with several collaborative partners to investigate multiple dimensions related to the ecology and pathology of Toxoplasma. In humans, we are using a saliva-based assay to examine associations among infection status, personality constructs, and specific behavioral outcomes. In cooperation with scientists at Colorado State University, the US Department of Agriculture, and the Leeds School of Business, we have designed questionnaires that measure participants’ scoring on constructs such as core self-evaluation, mindfulness, behavioral inhibition, and risk-taking personality. We also anonymously measure behavioral outcomes such as grade point average, drug use, entrepreneurship, and car accidents. By combining this information with data on infection status and infection source (i.e., cat feces vs. undercooked meat), we aim to determine how toxoplasmosis – through its potential influence on personality constructs – associates with detectable behavioral changes. At the same time, we are working to compile a large-scale, geo-referenced database with detailed records of T. gondii infection from humans, wildlife, and domestic animals from across the United States. Our aim is to test hypotheses related to dominant transmission pathways, including the congruence of spatial and temporal infection patterns among different host groups, while also creating a data platform for future research endeavors.

The VandeWoude Laboratory, College of Veterinary Medicine and Biomedical Sciences