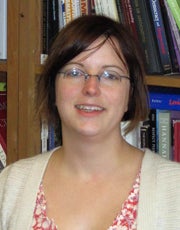 She is currently working on a book manuscript entitled Sharing Democracy. This book critically examines a dominant presumption in democratic theory that democracies can only work where citizens share something in common – whether that is a nationality, a set of political values, or the status of citizenship. In place of this presumption, Ferguson develops a nonfoundationalist account of how we share democracy with others. This project has been supported by a Visiting Research Fellowship at the University of Utah’s Tanner Humanities Center and a Junior Faculty Development Award from CU.

Her interests include democratic theory, feminist theory, the role of truth in politics, and the philosophy of language. Her most recent publication explores all of these themes via an analysis of the use of feminist rhetoric to justify the U.S. foreign policy of building democracies in Afghanistan and Iraq: "W Stands for Women: Feminism and Security Rhetoric in the Post-9/11 Bush Administration," which appeared in Politics & Gender in 2005. She is also the co-editor with Lori Marso of Union College of a volume of essays further developing these themes entitled W Stands for Women: How the George W. Bush Presidency Has Shaped a New Politics of Gender (Duke University Press, 2007). Her work has appeared in Hypatia, Theory & Event, The European Legacy, and Philosophy in Review.

Together with Professors Baird and Mapel, she is the recipient of a Ford Foundations Difficult Dialogues Initiative stipend http://www.difficultdialogues.org/projects/and a grant from CU’s Institute for Civic and Ethical Engagement to fund the development of a new service-learning course focused on the cultivation of the dialogue skills necessary for effective citizenship in diverse societies. The course, “Diversity, Disagreement, and Democracy,” was taught in Spring and Fall 2007. She also teaches courses in the history of political thought, democratic theory, feminist theory, and multiculturalism.