Poetry, considered the truest expression of feeling through the limitations of word, hints at that which we know yet cannot say. The poetry surrounding drones suggests the pain associated with them on populations around the world. Here, we are honored to showcase two poems by Kim Garcia from her book, Drone: (1) Drone: Tour of Duty (2) Night Flight, Night Vision.

Kim Garcia is the author of The Brighter House, winner of the 2015 White Pine Press Poetry Prize, DRONE, winner of the 2015 Backwaters Prize, and Madonna Magdalene, released by Turning Point Books in 2006. Her chapbook Tales of the Sisters won the 2015 Sow’s Ear Poetry Review Chapbook Contest. Her poems have appeared in such journals as Crab Orchard Review, Crazyhorse, Mississippi Review, Nimrod and Subtropics, and her work has been featured on The Writer’s Almanac. Recipient of the 2014 Lynda Hull Memorial Prize, an AWP Intro Writing Award, a Hambidge Fellowship and an Oregon Individual Artist Grant, Garcia teaches creative writing at Boston College. 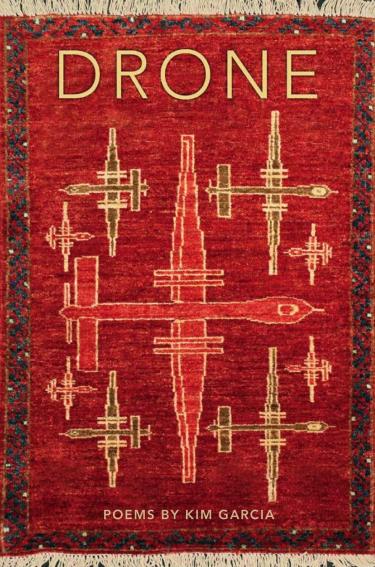 Even here, listening to the birds cupped
and calling in this hollow where cell phones
won’t reach, wireless shaky, you can
imagine a womb of earth, a cloister. Even here

the drones like paper airplanes awkwardly
folded, with their blind beaks and albatross
wings, are mapping the territory, webbing
world wide. And we are right to fear

our own fear—its spasms of self-compromise
narrowing life to its straw, pressure
without amplitude, without history and its long
dawn, and tender children always born naked.

Leaving the body sense, the Gs, tilt
and recover—what sees?

Flying to the white hot parts of the map
in mountain dark. Lidless eye

We are sovereign sight’s living hands, dreaming drone-like
in infrared, grids and pixel-prisons.

Tunneling towards a corps, a vector mapped
of human warmth, pattern only.

Child of the Panopticon, Gorgon’s Stare,
Eye of God, where does your vision end?

More engagements in poetry with drones: