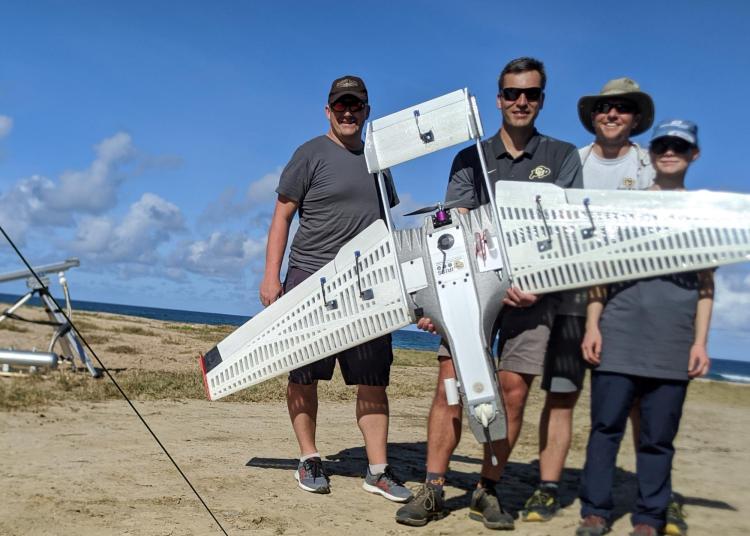 Supported by the NOAA UAS Program Office, IRISS Engineering Manager, Steve Borenstein is currently overseeing IRISS Pilots Michael Rhodes and Chris Choate in operations for the Atlantic Tradewind Ocean-Atmosphere Mesoscale Interaction Campaign (ATOMiC). Operating out of Morgan Lewis, a coastal location on the eastern shore of Barbados for launch and retrieval of the RAAVEN, the team with use a combination of bungee launches and our catapult launcher the RAPCat to measure winds and turbulence in the boundary layer, dynamics and fluxes at cloud base, and surface-air exchange.

The RAAVEN will include in its payload the miniFlux sensor package, which will make measurements intended to contribute to NOAA forecasting efforts for weather and climate. This lightweight package, designed collaboratively by NOAA-PSD, CIRES, and IRISS, can be deployed on UAS over otherwise difficult-to-sample regions of the earth.

The RAAVEN is ideally suited to this type of effort, since it requires no runway and needs only a limited amount of open space to land. Combining the RAAVEN with the miniFlux allows for rapid deployment and operation to make these measurements more easily obtainable.

"The miniFlux sensor provides new perspectives on this transport and will be deployed in key environments, including the tropics (as part of the Atlantic Tradewind Ocean–Atmosphere Mesoscale Interaction Campaign, ATOMIC) and central Arctic ocean (as part of the Multidisciplinary drifting Observatory for the Study of Arctic Climate, MOSAiC), over the coming year," said Gijs de Boer (ESRL/PSD/CIRES/CU).