Storm clouds begin to form overhead as the sky darkens. Our once talkative team now watches in silence, waiting to see if the autonomous flight software will indeed chase the tracker vehicle.

“It's following. It's following. Perfect.” With this statement from pilot Dan Hesselius, the team exhales and begins chatter again. Follow-Me, the autonomous flight software in question, was one of the many operations being tested that day. 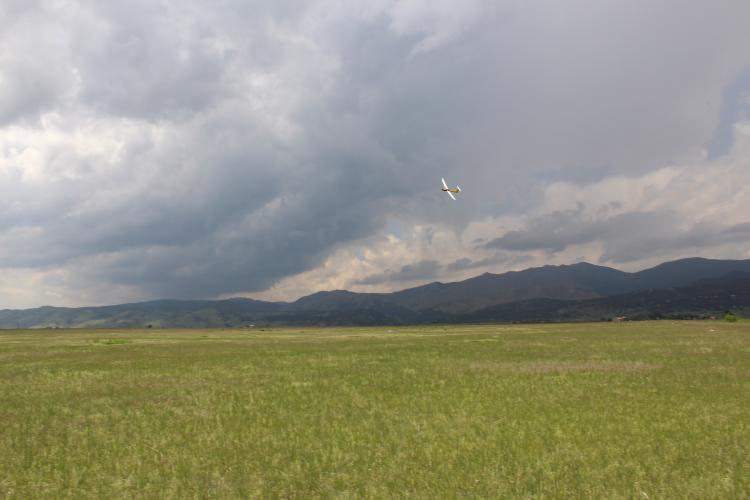 In preparation for the summer storm season, the flight crew was on one of many training missions. The goals this overcast Tuesday centered around training at the CU Research & Engineering Center for Unmanned Vehicles (RECUV) Table Mountain UAS Test Range,  a unique facility for testing unmanned aircraft systems (UAS), created in 2003 on the Department of Commerce’s Table Mountain Field Site and Radio Quiet Zone west of Longmont, CO. The ground crew, made up primarily of undergraduate students in aerospace engineering, was charged with practicing the pragmatic components like getting to a location and setting up the aircraft avionics and propulsion systems in order to be ready to fly as soon as possible. In a storm scenario in the Great Plains, each moment is crucial for collecting data. The flight crew underwent operations training, not only autonomous flight, but manual flight (piloting) and visual observer training, which is necessary to ensure safe operations in the national airspace. Lastly, the team wanted to test their unmanned aircraft, two Tempest UAS, to check their readiness for storm deployment and if any adjustments needed to be made. 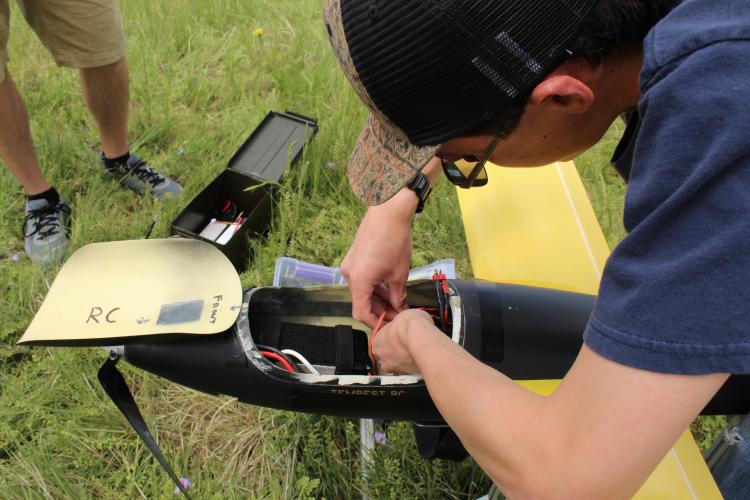 After a quick briefing by pilots Dan Hesselius and Steve Borenstein, each member of the flight crew got to work on their specific task. Tim Kiley had the responsibility of putting together one of the aircraft, duties like assembling the body of the plane, adding the batteries, and checking its balance. Chris Brown and Will Finamore set up the winch, with a high-strength line driven by an electric motor that helps the aircraft take off. Tom Lillis set up the Mission Control system which monitors and controls the avionics on the aircraft and the autoflight software. The entire process was efficient and, within no time, the Tempest was propelled into flight.

While the Tempest was in flight, Dan noticed the motor was revving unexpectedly and gently led the aircraft to the earth. The team quickly diagnosed the glitch as having to do with the electronic speed controller and lept into action to replace it and get the Tempest back in the air.

With the test runs complete, it was time to deploy the autonomous flight software developed by undergraduate Tom Lillis. Borenstein took the wheel of the tracker vehicle while Hesselius switched on the Follow-Me autoflight program. The flight crew hopped in the vehicle and did several loops around the facility’s grounds with the Tempest in tow. It soared at a designated distance from the vehicle, taking wide banking turns and circling overhead when the car finally came to a halt. 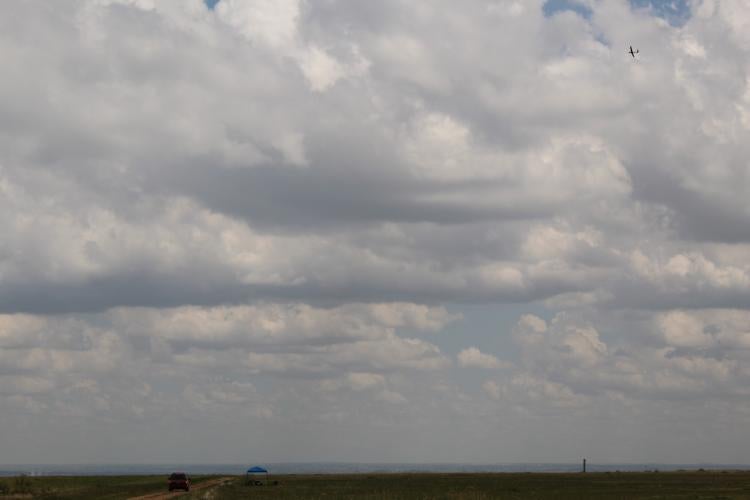 Jason Keeler, a visiting postdoctoral research associate from the University of Nebraska-Lincoln, is embedded within the IRISS team in Boulder to work on refining deployment strategies for the UAS and to develop new forecast models for incorporating the data they collect. According to Keeler, this initial year of deployments for Project Storm will collect data in the outflow boundaries of storms, thought to have a substantial effect on the development of tornadoes. Underlying the data collection is the drive to test limits not only of the equipment, but of the flight crew and the methods of data collection.

Keeler: “In this first year, we want to make sure we have our ducks in a row when it comes to gathering data to do science, so by Spring 2017 we are a well-oiled machine capable of gathering unique, exciting, and useful datasets.”