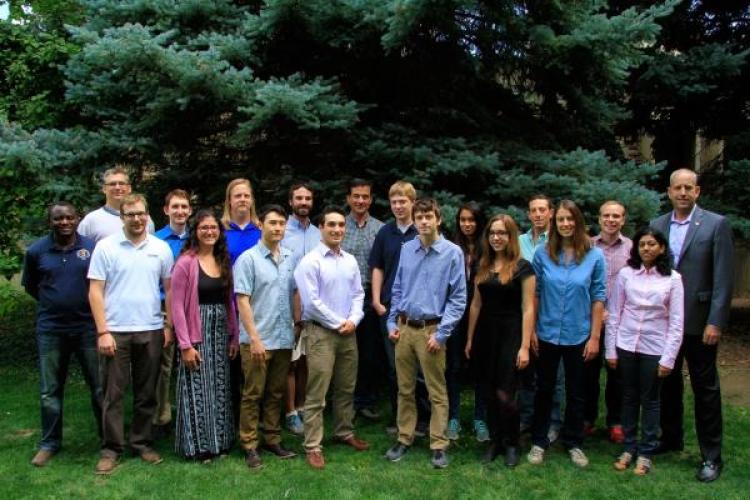 A CU Boulder student team has been named a finalist in NASA’s CubeQuest Challenge small satellite design and launch competition. The team received the news in a conference call with NASA, according to Alec Forsman, an aerospace graduate student and the team’s project manager.

“I was nervous. We had a really strong entry, but we knew the other teams would, too,” Forsman says.

The competition is focused on finding innovative solutions to deep space communications using small spacecraft. It has had multiple stages, with teams presenting increasingly detailed satellite design plans to NASA at each level. It’s a lot of work, but comes with a big prize at the end for the top three teams: a slot for their satellites on NASA’s unmanned Orion Exploration Mission-1, which is set to fly in 2018.

“It’s an honor to get this far, and [it] shows the quality of our students and work. We have the chance to be one of the first deep space CubeSats, which is really exciting,” Palo says.

If they’re successful, the mission would take CU-E3 more than 2.5-million miles into space, to an eventual orbit more than ten times the distance from the Earth to the Moon. Most CubeSats stay much closer to home – orbiting only a few hundred miles above the earth – and Palo says being so far away presents the team with unique technological challenges.

“We can’t use the same antennas or positioning tools, because they only work when you’re close to the Earth. We’re creating novel designs that haven’t been done before, and we want to show that a small, less expensive satellite can be useful in deep space,” Palo says.

The contest just wrapped up its third round with the CU-E3 team placing third. As one of the top-five ranking entries, the team is receiving $30,000 to continue development. This is not the project’s first award from NASA; CU Boulder placed fourth and earned $30,000 in the second round. If they make the final cut, they will be in the running for additional awards worth up to $1.5 million.

With the earlier design stages of the competition now complete, Forsman says they’re moving into actual construction. “Our plans are finalized and we will start ordering flight hardware almost immediately."

They will be working fast. The satellite is is set to be delivered to NASA in December 2017.