Putting the squeeze on mitochondria: The final cut 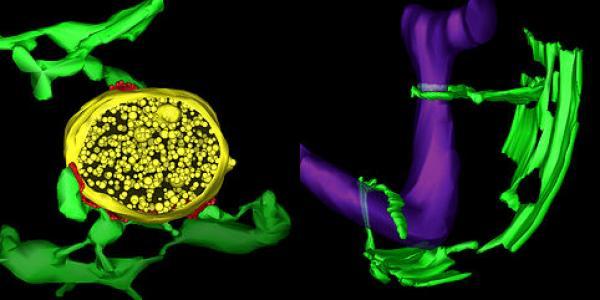 A three-dimensional structure of membrane contact sites (red) between endoplasmic reticulum tubules (green) and mitochondria (purple) in a yeast cell (right) or an endosome (yellow) in an animal cell (left) are seen. Tomography by Matthew West.

A new CU Boulder study shows for the first time the final stages of how mitochondria, the sausage-shaped, power-generating organelles found in nearly all living cells, regularly divide and propagate.

In 2011, CU Boulder Associate Professor Gia Voeltz and her colleagues surprisingly found that endoplasmic reticulum (ER), another cell organelle, branches through cytoplasm like a spider web, wrapping around other organelles including mitochondria. They discovered that once an ER tentacle touches a single mitochondrion and initiates constriction, a cell protein called a dynamin-related protein, or Drp1, is recruited to further constrict the mitochondria at the spot of ER contact.

Here is the new twist: Voeltz’s team has now shown that once the squeeze is on the mitochondria by the Drp1 protein, a second protein –  called Dynamin-2, or Dyn2 – is recruited to finish the job in a process called fission, splitting the organelle in two. Shaped like tiny springs, the dynamin proteins encircle the mitochondria and squeeze, somewhat like a person squeezing and twisting an elongated balloon into two halves.

Both proteins are required for mitochondrial fission to occur since Drp1 is only strong enough to squeeze the mitochondria down to a certain size, and Dyn2 can only finish what Drp1 started after the constriction band is sufficiently shrunk.

“Our findings change what everyone has believed about mitochondrial division,” said postdoctoral fellow Jason Lee, first author on the study. “Now we know that it takes at least three different constriction steps in order to ultimately divide mitochondria.”

A paper on the subject was published online in Nature on Oct. 31. In addition to Voeltz and Lee, other CU Boulder paper contributors include postdoctoral fellow Laura Westrate, graduate student Haoxi Wu and researcher Cynthia Page. All study authors are in the Department of Molecular, Cellular and Developmental Biology.

Floating around in almost all living cells, mitochondria vary in number from dozens to several thousand. Muscle cells, for example, have large numbers of mitochondria because of their high energy needs. New mitochondria are created when cells signal the need for more energy. Mitochondria also carry a small amount of DNA material passed down maternally.

Mitochondria are important for a host of reasons. They generate energy in cells, they can play a role in longevity and they are crucial for blood sugar maintenance and fat loss. Damaged mitochondria can cause problems in cells of the brain, liver, heart, skeletal muscles and respiratory systems.

The new study was funded by grants from the National Institutes of Health.

The study results are important because a better understanding of mitochondrial division is a step closer to understanding what might change in cells under pathological conditions like cancer, said Wu.

“The ability of our cells to efficiently convert nutrients into energy is rooted in the cell’s ability to manage the shape, number and positioning of mitochondria through a balance of fusion and division,” said Lee. “This balance goes awry in cancer and neurodegeneration.”