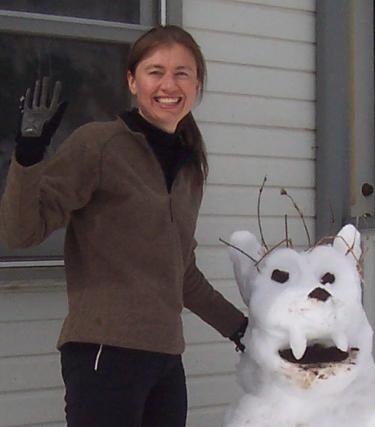 Elena is a native Russian, who spent the first 19 years of her life in Moscow, wishing she were somewhere else. Seduced by linguistic puzzles, she entered the Philological Department of Moscow State Lomonosov University in 1989 and studied structural and applied linguistics there for the next 2.5 years. Many Chomskian transformations later, Elena wrote to more than 100 universities in the United States and was lucky to get a full scholarship to come to study at Upsala College, NJ, in 1992, where she majored in Mathematics and French and minored in Spanish and Studio Art. In 1994 she graduated summa cum laude and entered the Comparative Literature Department at the University of Colorado at Boulder, where she received her M.A in 1997 and her Ph.D. in 2002. Elena has been teaching a variety of Russian language and culture classes full-time in the GSLL Dept at CU-Boulder since 1998. Her major areas of interest include innovative teaching methods and materials, using technology in the classroom and learning-enhancing extracurricular activities. In 2005, she was awarded a Boulder Faculty Assembly award for excellence in teaching. Elena spends her spare time living the American Dream. Always dying to see the world and learn languages, she celebrated the 21st century by spending six long summers volunteering and adventure-traveling in Africa, Europe, South America and the South Pacific. Altogether, she traveled in 24 countries from Madagascar and New Zealand to Ecuador and Kenya and lived in Tanzania, Ghana, Chile, Japan and France. She now makes her home in a sleepy mountain town above Boulder with her family -- partner Kevin, daughter Leah, mother Luda and a naughty golden retriever Perrastroika. She enjoys the great Colorado outdoors, reading, gardening and being part of the unique cultural oasis of Boulder. On January 14, 2008, 16 years to the day since she left Russia to seek a better life, Elena’s dream finally came true – she pledged allegiance to the Stars and Stripes.