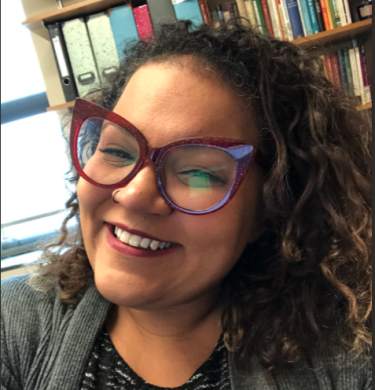 I am an Assistant Professor of German and my research and teaching interests range broadly from beguine mysticism of the thirteenth and fourteenth centuries to Afro- and Black German hip hop, poetry, and activism. I received my BA in German studies and History with a minor in Medieval studies from the University of Minnesota, as well as an MA in German/ Germanic Medieval studies. I completed my PhD in German from the University of California Berkeley in 2018. The core of my research is the question of identity and cultural production by marginalized voices from the medieval through current societies. My work is interdisciplinary—focusing on historical and philological methodologies as well as sociology and cultural anthropology—and crosses linguistic and modern national borders.

My current research focus is Black and Afro-German cultural production, lyricism, activism, and questions of identity performance and formulation. Central to my research is two concepts: 1) the ways in which Black-created works are consumed by a predominantly white German public and how the historical lineages of white supremacy and colonialism impact how these works are understood; 2) Black cultural production as a means of dual purpose communication, both within Afro- and Black German-speaking communities and across the Diaspora, that seeks to both name oneself and speak out against forms of systemic and institutional racism, discrimnation, bigotry, etc. I am currently developing two monograph-length projects, one highlighting the issue of white consumerism of Black German-created works (tentatively entitled The Silence at Home: Racial Textualities and Poetics in Afro- and Black Germany) and the second focusing on Black joy in German Hip hop (tentatively titled On Black Joy: German Hip Hop, Home(coming), and Futures ).

As an avid consumer of pop culture, gamer, and graphic novel reader, gaming and storytelling (DnD/Pathfinder, LARPing, table top, etc.), I integrate aspects of gaming and storytelling into courses I develop, as well as research-based creative interpretation/ introspection of broad topics such as modernity, identity, and legacies of coloniality.

“A Question of Inclusion: Pedagogical Methods, Systematic Racism, and the US German

Classroom” in Diversity and Decolonization of the German Curriculum, eds. Regine Criser and

French-speaking Black character in Parzival, as a figure of the white imagination who reveals

the fantasies of a “successful” colonization. More broadly, this article engages the longer,

premodern legacy of white and Christian imaginations of supremacy. Manuscript in progress, revision of 2021 Race Before Race talk.

“Coming Home: Blacktivism and the Hip Hop of Leila Akinyi and Megaloh.” Manuscript in

On Black Joy: German Hip Hop, Home(coming), and Futures is a monograph length project that focuses on the multilingual works of Leila Akinyi, Megaloh, Samy Deluxe, and other German rappers and artists specifically focusing on tracks and videos that conceptualize home, homecoming and joy. Turning away from media fascination with Black trauma and hardship, I highlight the importance of love, community building, and imagination outside of white Eurocentric norms to envision spaces constructed for and by Afro- and Black German communities