Dr. Patrick Eiden-Offe on Romantic Anti-Capitalism and the Invention of the Proletariat 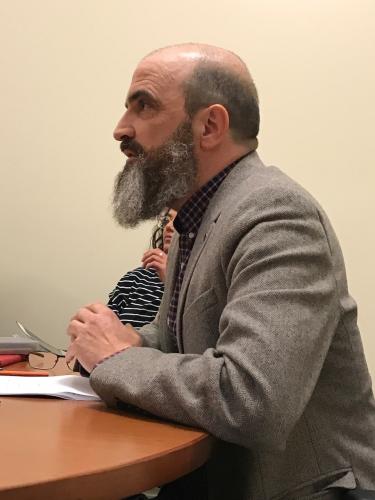 On October 1, Dr. Patrick Eiden-Offe (Berlin) discussed his celebrated new book, Die Poesie der Klasse, with students and faculty from GSLL and other departments. Dr. Eiden-Offe’s lecture focused on the development of the proletariat as an object of social critique, ideological discourse, and revolutionary theories of change during the time of the so-called Vormärz, the historical period also often referred to as restoration, between the restructuring of Europe after the defeat of Napoleon and the 1848 revolution. During this time, the proletariat developed as a collective of impoverished craftsmen, urban rabble, rural vagabonds, broke aristocrats, and intellectuals who lived a free but precarious life. Dr. Eiden-Offe emphasized the importance of literary discourse for the figuration of the proletariat. On the one hand, he explained that literary texts such as social poems, reports, novellas and pamphlets must be considered essential materials for the cultural formation and self-conception of the proletariat. On the other hand, the process of formation of this “classless class,” as Karl Marx referred to it, must itself be described as one that follows certain literary forms, and goes hand in hand with the establishment of new forms of writing.