Metal Loading from Acid Mine Drainage in the Coal Creek Watershed 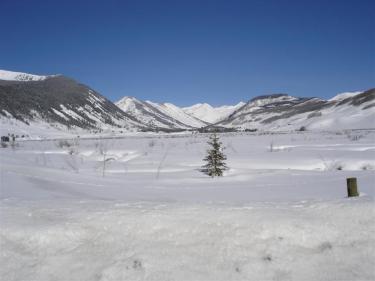 With funding from the University of Colorado's Outreach Committee, we are assisting the Coal Creek Watershed Coalition (CCWC) in assessing the amount and location of metal inputs to Coal Creek.  Coal Creek is the main water supply for the Town of Crested Butte in northern Gunnison County, Colorado.  The watershed was the site of numerous precious metal, base metal, and coal mines since the 1870s.

The two major abandoned mine sites of concern are the Standard Mine, now a U.S. Environmental Protection Agency Superfund site, and the Keystone Mine on Mount Emmons.  The Standard Mine, a former gold, zinc, lead, and copper mine, was added to the National Priorities List in 2005, and remediation is underway.  The Keystone Mine, a former copper, lead, cadmium, and zinc mine operated from the 1960s to the 1980, discharges about 1,000 gallons per minute of acidic mine drainage.  The drainage is treated in the Mount Emmons treatment plant, which is owned and operated by U.S. Energy.  U.S. Energy is interested in mining the molybdenum deposit below Mount Emmons. 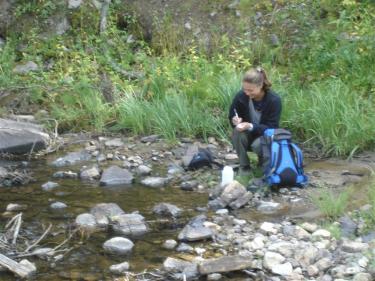 Our research on Coal Creek has focused on the sources of metals -- mainly zinc, cadmium, copper, and lead -- in the watershed.  To do this, we have conducted metal loading tracer tests pioneered by the U.S. Geological Survey for their Abandoned Mine Lands Initiative.  For these tracer tests, a salt for which stream transport is essentially conservative (e.g., lithium chloride, sodium bromide, sodium chloride) is steadily injected at an upstream injection point and its arrival at some downstream point is monitored by specific conductance.  Dilution of the salt concentration along the stream is used to determine stream discharge.  Once the stream contains a constantly-injected amount of the salt, a synoptic sampling is performed between the upstream injection point and the downstream monitoring point.  The synoptic sampling is a "snapshot" (with the samples collected as quickly as possible) of the salt and metal concentration in the stream.

We have now performed two of these tests over 9 kilometers of Coal Creek, from above Elk Creek, the tributary that carries metals from the Standard Mine site to Coal Creek, to the north side of Crested Butte, near the confluence of Coal Creek with the Slate River.  The first test was conducted in September, 2005, for low-flow conditions.  The second test was conducted in June, 2006, for high-flow conditions.  The results of these tests are currently being analyzed and turned into reports for the CCWC.  A preliminary version of the low-flow report is currently available (Shanklin and Ryan, 2006).  In June, 2006, we also collected sediment and benthic macroinvertebrate samples from Coal Creek to examine the record of metal inputs not detected during the tracer tests.  Reports on the high-flow tracer test and the sediment and benthic macroinvertebrate sampling will be delivered in early 2007. 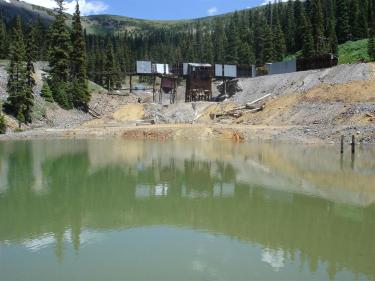 The Standard Mine Superfund Site as it appeared in July 2005. The acidic, metal-laden water in this pond overflowed into Elk Creek, which carried the water to Coal Creek.

The work on Coal Creek has been carried out by one Master of Science graduate, Brianna Shanklin, and one Bachelor of Science candidate, Hallie Bevan.  Brianna's thesis, which was completed in August, 2006, examined metal transport in Coal Creek at low flow.  Hallie's thesis will present the results of the high-flow tracer test.  Two summer students, Frannie Bui (Drexel University) and Scarlett Graham (Allegheny College), conducted the sediment and benthic macroinvertebrate sampling as part of a National Science Foundation Research Experience for Undergraduates summer program. 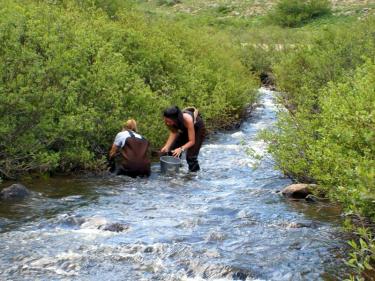 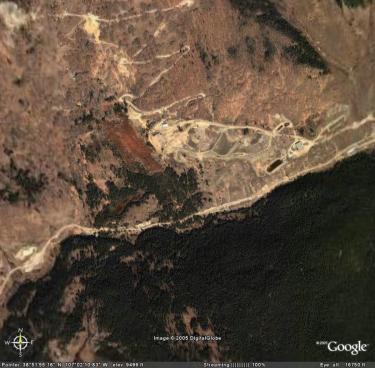 Aerial photograph (Google Earth) of the Mount Emmons treatment plant, Keystone Mine, and the gossan and iron fen. 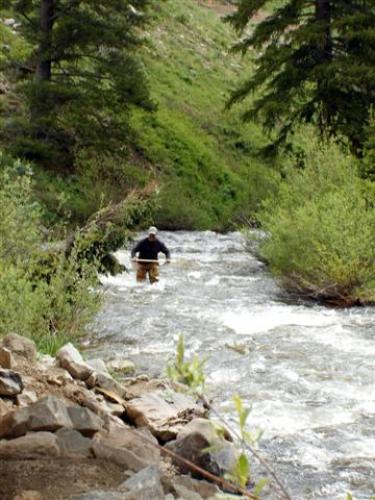