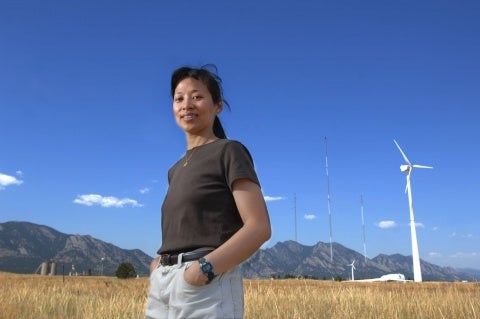 From 1983-1993, Dr. Pao spent periods of time working at the Naval Surface Warfare Center (Silver Spring, Maryland), Pacific Gas & Electric Company (San Francisco, California), Hughes Aircraft Company (El Segundo, California), AT&T Bell Laboratories (Holmdel, New Jersey), and The MITRE Corporation (Bedford, Massachusetts). From 1993-1995, she was an Assistant Professor in the Electrical Engineering and Computer Science Department at Northwestern University in Evanston, Illinois. Since 1995, she has been with the University of Colorado at Boulder, where she is now the Richard and Joy Dorf Professor in the Electrical, Computer, and Energy Engineering Department. She has spent sabbaticals at Harvard University (2001-2002), University of California Berkeley (2008), and the National Renewable Energy Laboratory (2009). Her current research interests are in control systems (with applications to flexible structures, wind turbines, wind farms, power converters, tape systems, disk drives, atomic force microscopy, near-field scanning optical microscopy and lithography); multisensor fusion (with applications to uninhabited autonomous vehicles, satellites, and automotive active safety systems); and haptic and multi-modal visual/haptic/audio interfaces (with applications to scientific visualization and spatial communication).

Dr. Pao is the recipient of a National Science Foundation Early Faculty CAREER Award (1996-2001) and an Office of Naval Research Young Investigator Award (1997-2000). She was also a winner of the 1996 IFAC World Congress Young Author Prize, and she was the co-author and advisor on the paper that received the Best Student Paper Award at the 2001 American Control Conference. She was an invited participant of the National Academy of Engineering's 1997 Frontiers of Engineering Symposium and 2000 German-American Frontiers of Engineering Symposium. Other selected awards include a 2003 Subaru Teaching Excellence Award, the Best Commercial Potential Award at the 2004 International Symposium on Haptic Interfaces for Virtual Environments and Teleoperator Systems, and the Best Paper Award at the 2005 World Haptics Conference. She was a plenary speaker at the 2006 IEEE Conference on Decision and Control, the 2011 ASME International Mechanical Engineering Congress and Exposition, the 2012 ASME Dynamic Systems and Control Conference, and the 2013 IEEE Conference on Decision and Control. She was a keynote speaker at the 1998 and 2000 Japan/USA/Vietnam Workshops on Research and Education in Systems, Computation, and Control Engineering and the 2008 IFAC World Congress; and she was distinguished lecturer at the 2012 Chinese Control and Decision Conference. She is a Fellow of the IEEE.

Dr. Pao served on the Program Committees for the 1995, 1997, 2000, and 2001 American Control Conferences and was also on the Program Committee for the 2000 IEEE Conference on Decision and Control. She was on the Organizing Committees for the Pioneering International Symposium on Motion and Vibration Control in Mechatronics held in 1999 in Tokyo, Japan and the 1999 International Symposium on Motion and Vibration Control in Las Vegas, Nevada, USA. Dr. Pao also served on the International Program Committees for the 2000 Japan/USA/Vietnam Workshop on Research and Education in Systems, Computation, and Control Engineering and for the 2002 IFAC Conference on Mechatronic Systems. Prof. Pao has been an Associate Editor (1995 - 1997) on the Conference Editorial Board of the IEEE Control Systems Society. She was also the Editor (1995-2001) for the American Automatic Control Council Newsletter (past issues).