Leonard Bernstein was born in Lawrence, Massachusetts. He took piano lessons as a boy and attended the Garrison and Boston Latin Schools. At Harvard University, he studied with Walter Piston, Edward Burlingame-Hill, and A. Tillman Merritt, among others. Before graduating in 1939, he made an unofficial conducting debut with his own incidental music to "The Birds," and directed and performed in Marc Blitzstein's "The Cradle Will Rock." Then at the Curtis Institute of Music in Philadelphia, he studied piano with Isabella Vengerova, conducting with Fritz Reiner, and orchestration with Randall Thompson. 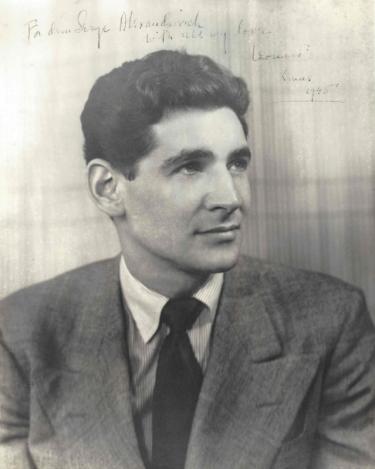 Leonard Bernstein, 1945; "For Serge Alexandrovich [Koussevitzky], with all my love, Leonard, Xmas, 1945"

Bernstein was appointed to his first permanent conducting post in 1943, as Assistant Conductor of the New York Philharmonic. On November 14, 1943, Bernstein substituted on a few hours notice for the ailing Bruno Walter at a Carnegie Hall concert, which was broadcast nationally on radio, receiving critical acclaim. Soon orchestras worldwide sought him out as a guest conductor.

In 1945, he was appointed Music Director of the New York City Symphony Orchestra, a post he held until 1947. After Serge Koussevitzky died in 1951, Bernstein headed the orchestral and conducting departments at Tanglewood, teaching there for many years. In 1951, he married the Chilean actress and pianist, Felicia Montealegre. He was also visiting music professor, and head of the Creative Arts Festivals at Brandeis University in the early 1950s. 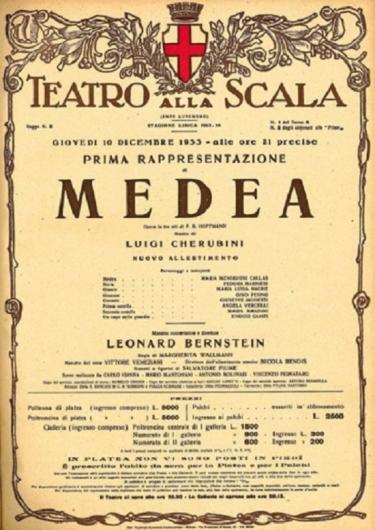 Bernstein traveled the world as a conductor. Immediately after World War II, in 1946, he conducted in London and at the International Music Festival in Prague. In 1947 he conducted in Tel Aviv, beginning a relationship with Israel that lasted until his death. In 1953, Bernstein was the first American to conduct opera at the Teatro alla Scala in Milan: Cherubini's "Medea" with Maria Callas.

Bernstein was a leading advocate of American composers, particularly Aaron Copland. The two remained close friends for life. As a young pianist, Bernstein performed Copland's "Piano Variations" so often he considered the composition his trademark. Bernstein programmed and recorded nearly all of the Copland orchestral works—many of them twice. He devoted several televised "Young People's Concerts" to Copland, and gave the premiere of Copland's "Connotations," commissioned for the opening of Philharmonic Hall (now David Geffen Hall) at Lincoln Center in 1962.

While Bernstein's conducting repertoire encompassed the standard literature, he may be best remembered for his performances and recordings of Haydn, Beethoven, Brahms, Schumann, Sibelius and Mahler. Particularly notable were his performances of the Mahler symphonies with the New York Philharmonic in the 1960s, sparking a renewed interest in the works of Mahler.

Inspired by his Jewish heritage, Bernstein completed his first large-scale work: Symphony No. 1: "Jeremiah" (1943). The piece was first performed with the Pittsburgh Symphony Orchestra in 1944, conducted by the composer, and received the New York Music Critics' Award. Koussevitzky premiered Bernstein's Symphony No. 2: "The Age of Anxiety" (1949) with the Boston Symphony Orchestra, Bernstein as piano soloist. His Symphony No.3: "Kaddish" (1963), premiered by the Israel Philharmonic Orchestra, is dedicated "To the Beloved Memory of John F. Kennedy." 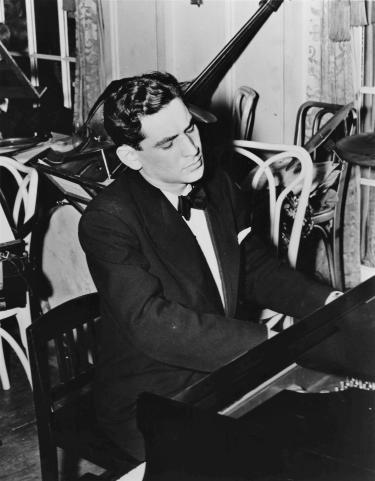 Other major compositions by Bernstein include "Prelude, Fugue and Riffs for solo clarinet and jazz ensemble (1949);" "Serenade for violin, strings and percussion," (1954); "Symphonic Dances from West Side Story," (1960); "Chichester Psalms for chorus, boy soprano and orchestra" (1965); "MASS: A Theater Piece for Singers, Players and Dancers" (1971), commissioned for the opening of the John F. Kennedy Center for the Performing Arts in Washington, DC, and first produced there in 1971; "Songfest a song cycle for six singers and orchestra" (1977); "Divertimento for orchestra" (1980); "Halil for solo flute and small orchestra" (1981); "Touches for solo piano" (1981); "Missa Brevis for singers and percussion" (1988); "Thirteen Anniversaries for solo piano" (1988); Concerto for Orchestra ("Jubilee Games") (1989); and "Arias and Barcarolles for two singers and piano duet" (1988).

Bernstein contributed substantially to the Broadway musical stage. He collaborated with Betty Comden and Adolph Green on "On The Town" (1944) and "Wonderful Town" (1953). In collaboration with Richard Wilbur and Lillian Hellman and others he wrote "Candide" (1956). Other versions of Candide were written in association with Hugh Wheeler, Stephen Sondheim, et al. In 1957 he again collaborated with Jerome Robbins, Stephen Sondheim, and Arthur Laurents, on the landmark musical "West Side Story," also made into the Academy Award-winning film. In 1976 Bernstein and Alan Jay Lerner wrote "1600 Pennsylvania Avenue."

Festivals of Bernstein's music have been produced throughout the world. In 1978, the Israel Philharmonic sponsored a festival commemorating his years of dedication to Israel. The Israel Philharmonic also bestowed on him the lifetime title of Laureate Conductor in 1988. In 1986, the London Symphony Orchestra and the Barbican Centre produced a Bernstein Festival. The London Symphony Orchestra in 1987 named him Honorary President. In 1989, the city of Bonn presented a Beethoven/Bernstein Festival.

In 1985, the National Academy of Recording Arts and Sciences honored Bernstein with the Lifetime Achievement Grammy Award. He won eleven Emmy Awards in his career. His televised concert and lecture series started with the Omnibus program in 1954, followed by the extraordinary Young People's Concerts with the New York Philharmonic, in 1958 that extended over fourteen seasons. Among his many appearances on the PBS series Great Performances was the eleven-part acclaimed "Bernstein's Beethoven." In 1989, Bernstein and others commemorated the 1939 invasion of Poland in a worldwide telecast from Warsaw.

Bernstein's writings were published in "The Joy of Music" (1959), "Leonard Bernstein's Young People's Concerts" (1961), "The Infinite Variety of Music" (1966), and "Findings" (1982). Each has been widely translated. He gave six lectures at Harvard University in 1972-1973 as the Charles Eliot Norton Professor of Poetry. These lectures were subsequently published and televised as "The Unanswered Question." Bernstein always rejoiced in opportunities to teach young musicians. His master classes at Tanglewood were famous. He was instrumental in founding the Los Angeles Philharmonic Institute in 1982. He helped create a world class training orchestra at the Schleswig Holstein Music Festival. He founded the Pacific Music Festival in Sapporo, Japan. Modeled after Tanglewood, this international festival was the first of its kind in Asia and continues to this day.

Bernstein received many honors. He was elected in 1981 to the American Academy of Arts and Letters, which gave him a Gold Medal. The National Fellowship Award in 1985 applauded his life-long support of humanitarian causes. He received the MacDowell Colony's Gold Medal; medals from the Beethoven Society and the Mahler Gesellschaft; the Handel Medallion, New York City's highest honor for the arts; a Tony award (1969) for Distinguished Achievement in the Theater; and dozens of honorary degrees and awards from colleges and universities. He was presented ceremonial keys to the cities of Oslo, Vienna, Beersheeva and the village of Bernstein, Austria, among others. National honors came from Italy, Israel, Mexico, Denmark, Germany (the Great Merit Cross), and France (Chevalier, Officer and Commandeur of the Legion d'Honneur). He received the Kennedy Center Honors in 1980.

World peace was a particular concern of Bernstein. Speaking at Johns Hopkins University in 1980 and the Cathedral of St. John the Divine in New York in 1983, he described his vision of global harmony. His "Journey for Peace" tour to Athens and Hiroshima with the European Community Orchestra in 1985, commemorated the 40th anniversary of the atom bomb. In December 1989, Bernstein conducted the historic "Berlin Celebration Concerts" on both sides of the Berlin Wall, as it was being dismantled. The concerts were unprecedented gestures of cooperation, the musicians representing the former East Germany, West Germany, and the four powers that had partitioned Berlin after World War II.

Bernstein supported Amnesty International from its inception. To benefit the effort in 1987, he established the Felicia Montealegre Fund in memory of his wife who died in 1978.

In 1990, Bernstein received the Praemium Imperiale, an international prize created in 1988 by the Japan Arts Association and awarded for lifetime achievement in the arts. Bernstein used the $100,000 prize to establish The Bernstein Education Through the Arts (BETA) Fund, Inc. before his death on October 14, 1990.

Bernstein was the father of three children -- Jamie, Alexander, and Nina -- and the grandfather of four: Francisca, Evan, Anya, and Anna.

Article courtesy of the Leonard Bernstein Office website.  Thank you!