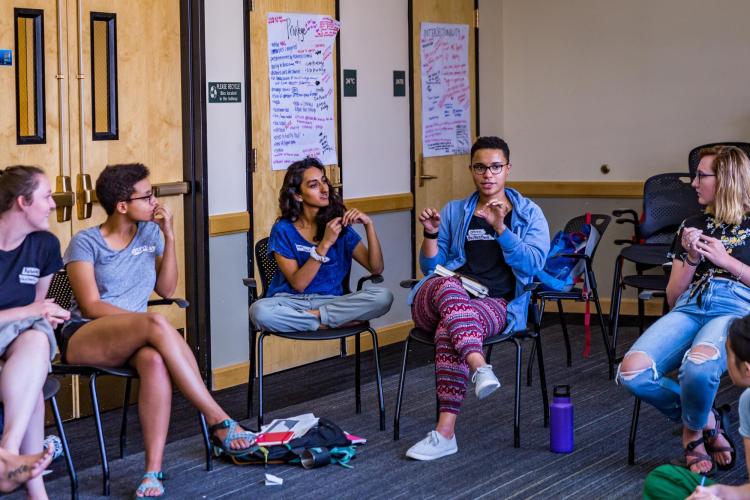 Olivia Gardener, a third year undergraduate at CU Boulder and a student leader with Never Again Colorado, was recently awarded the Rocky Mountain Peace and Justice Center’s peacemaker award for her civic engagement efforts to address issues of gun violence and work towards making Colorado schools and communities safer.

The Peacemaker of the Year (PMY) Awards ceremony and dinner, now in its 21st year, is an annual gathering held by the Rocky Mountain Peace and Justice Center with the goal of honoring and celebrating the work of peace and justice champions in the Boulder community and beyond.

Gardener is a double major in Ethnic Studies and Women and Gender Studies and is in her second year of INVST, a program of CU Engage. She was selected for the award as a leader among her peers who are also organizing around pressing social issues. The PMY award recognizes Gardener's work with Never Again Colorado, through which she helped to lead efforts to organize community events such as town halls and gubernatorial debates about gun violence, and conduct vigils centered on the issue of gun violence. Alongside her colleagues at Never Again Colorado, Gardener has worked tirelessly towards reducing gun violence and deaths in Colorado communities.

“I would like to recognize the whole collective that has been Never Again Colorado, Students Demand Action of Colorado, and Moms Demand Action. There is also a long list of individual people to whom I am endlessly indebted to for their support, time, and belief in the movement and the process,” Gardener says with gratitude.

She describes winning the award as an uplifting part of "the journey” that is doing social change work.

“When you're in the fight [to end gun violence], it can often feel like so little is happening, which can be consuming. But the reminders from the community are that the work matters, and this is [motivation] to keep going," Gardener states. “I hope that this award inspires others to stick with [social change and civic engagement work], even in the rough of it all.”

Gardener recieved the PMY award in the youth-activism category and continues her work with Never Again Colorado and as a student leader on CU Boulder’s Campus.