Thank You for Your Support!

Thanks to the support of the campus, city and community, the CU Boulder South Annexation Agreement was approved by Boulder City Council by a 6-1 vote on Sept. 21, 2021. This means we are one major step closer to providing life-saving flood mitigation measures and addressing the housing crisis Boulder is facing. We are deeply grateful for every member of the CU Boulder community, City Council and the public who helped make this possible.

Why Here? Why Now?

Since purchasing the 308-acre CU Boulder South site in 1996, the university has kept the space open to the public for continued access — and it’s important to note that public access to CU’s property will continue now that the property is annexed. In the intervening years, however, the area was identified by leading hydrologists and senior planners as an optimal location for flood protections for thousands of Boulder residents.

Nearly 10 years after these first conversations, floodwater from the 2013 Boulder County floods gushed over U.S. 36, causing approximately $38 million in property damage citywide. The Frasier Meadows retirement community, with an average resident age of 87, was at greatest risk and ultimately sustained more than $11 million in damages — the costliest individual recovery effort in the state, according to FEMA officials at the time. During the flood, Frasier Meadows employees escorted residents -- many in wheelchairs -- to safety through rising flood water and mud.

As our nationally recognized climate scientists and researchers point out, extreme weather events will become the new normal, and there is no predicting when the next floods will come.

We must prepare for these events, and we must act with great urgency to protect our community members. The CU Boulder South Annexation Agreement was meticulously designed to do just that, providing protection for 2,300 downstream residents and 1,100 homes.

The CU Boulder South Annexation Agreement, which is both contractual and legislative in nature, is a legal document that explicitly sets the requirements and conditions for the transfer of 155 acres of land at CU Boulder South to the city for flood protection and dedication of permanent Open Space, as well as continued public access to the site. It also contains numerous binding covenants to codify how, what and where future development activities will occur.

Since 2015, CU and city leaders have engaged in the most comprehensive, detailed and collaborative negotiation in our shared 145-year history. Throughout this process, which originally began nearly two decades ago, the goal has remained constant: Work collaboratively to overcome the complex web of federal, state, and local regulations and rules to prioritize and achieve flood protections for downstream residents.

Now that CU Boulder South annexation has been approved, the city of Boulder can pursue fortified flood protections for its citizenry and area businesses. As part of an agreement that includes CU Boulder’s commitment to the transfer of 155 acres to the city for flood protection and permanent Open Space, the university also agrees to binding terms for future development plans for faculty, staff and non-freshman student housing, which is not expected to begin until at least 2027, as well as some limited academic and research uses.

The agreement also codifies the values that we all share: vital flood protection for the community, increased access to workforce and student housing, preserving open space and valuable habitat, preserving pristine views and sightlines, maintaining legal height limits, leading on climate action and transportation solutions, and continued recreational use for the public.

Together, these binding commitments provide an explicit assurance to the community on the type of development that can be expected on the site in the future.

What's in the Annexation Agreement?

The binding commitments now codified in the draft CU Boulder South Annexation Agreement were first articulated in the Guiding Principles in the 2015 update of the Boulder Valley Comprehensive Plan: 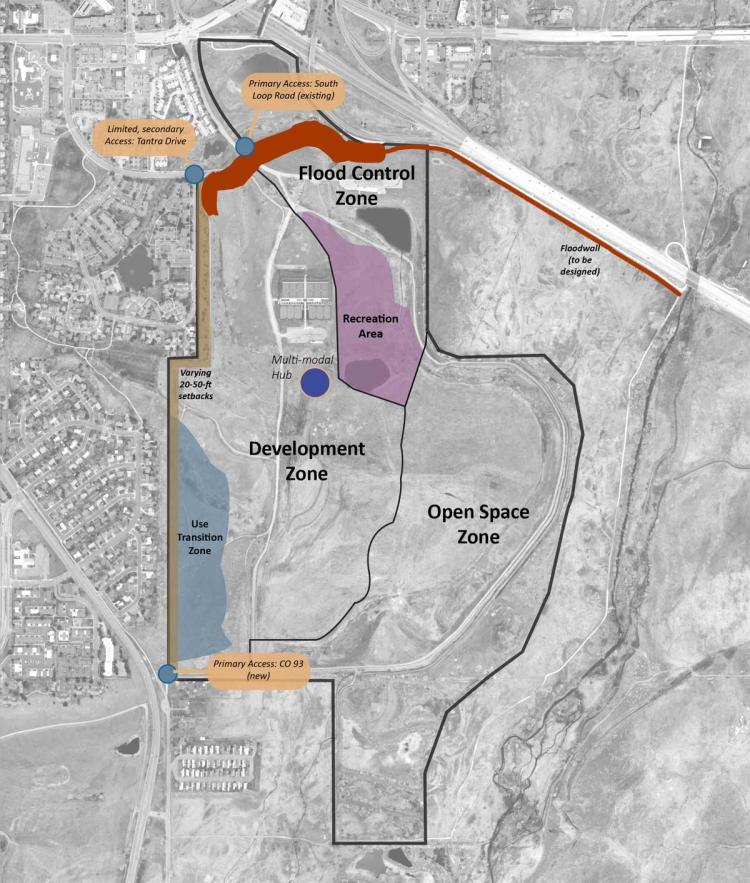