After running cross country and track at CU, Morgan Pearson (Econ, Math’16) worked odd jobs while pursuing a professional running career. He wanted a change that might incorporate his other athletic abilities. Pearson emailed the USA Triathlon’s (USAT) Collegiate Recruitment Program hoping his running times would interest them. They immediately sent him a bike, and he soon began training as a triathlete. In May, he qualified for the Olympics with an overall time of 1:43:12. Five years after Pearson reached out to USAT, he is headed to the 2020 Tokyo Olympics as a U.S. triathlete. Here, he reflects on his athletic background and his dreams of being the best on earth.

How did you get started as a runner and athlete?
My older brother ran cross country in middle school when we attended Delbarton, a school in New Jersey. I wanted to be like him!

Why the triathlon?
I grew up swimming and lifeguard training in the ocean, then I started running. So, I have a really good background for triathlon. I also love to train really hard, which triathlons require.

You were the first U.S. man ever to medal in multiple World Triathlon Championship Series events in one year, and you now rank 11th in the world. What is it like going into the Olympics with this background? Does this experience affect your outlook at all?

I'm actually the first male to win multiple medals, period (counting multiple years). I believe I am not a medal favorite, but I can be considered a contender based on my performance in Leeds and Yokohama. I am in really good shape, and I know I have the ability to medal. I am still relatively new to the sport, but I am telling myself I am a savvy veteran. 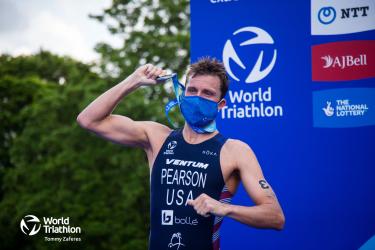 What motivates you?
My family. And wanting to be the best in the world.

What is your favorite trail to run on near Boulder?
Gold Hill!

What advice would you give to young athletes with Olympic dreams?
Be positive. It's easy to get down on yourself, but if you stay positive over the course of a season and a year, you will always be trending in the right direction. That, and: It is not supposed to be easy.

Is there anything else you would like to share?
I am honored to represent the United States in the Olympics. This past year and a half with COVID has been extremely difficult on a lot of people, and I am hoping the Olympics are a way the world can come together for something positive. Also, go Buffs!

Watch Morgan Pearson compete in the Olympic Triathlon on July 26, 2021.