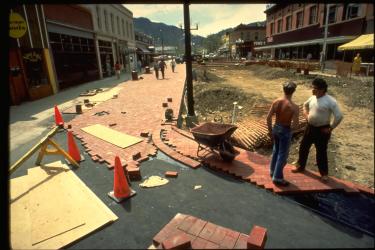 In 1963, Boulderites started thinking about improving Pearl Street with a pedestrian mall.

But just why did Pearl Street need attention? Boulder, which banned alcohol sales in 1907, was still dry in the early 1960s. Unfortunately, this meant all of the post-World War II commercial growth took place outside city limits.

Then, the Crossroads Shopping Center opened in 1962, sucking business from downtown Boulder like a black hole.

Years passed, and city council members began to wonder if the historic streets of downtown still held interest for the community. In 1976, ten years after the original idea, the City Council agreed to the walkway. I had just joined the council and was able to cast a vote in favor of building the mall.

On a glorious morning in June of 1976, a friend and I cruised Pearl Street in an old VW van. Following us was a public works crew that closed each block — the last car to drive down Pearl Street— as we rode past.

Today, that stretch is graced by Beat Book Store, the County Courthouse and the Avanti indoor food court.

Within days, crews began digging up the street’s decades-old water, sewer and gas lines before the city spent millions paving over new infrastructure with the now-famous red brick.

On Halloween 1976, several hundred costumed pedestrians ventured downtown to inspect the work and strut their stuff. This was the impetus of a now long-standing annual tradition; today, a trip to Pearl Street Mall on Oct. 31 is sure to delight even plain clothes tourists or locals.

The final brick was laid in the spring of 1977. In early August, we had a formal ribbon-cutting, but Boulder residents and CU students were already flocking to it by the thousands. 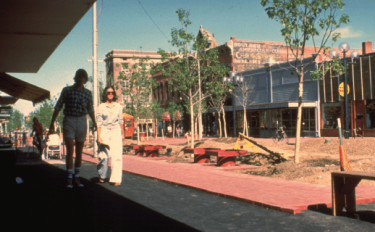 The next few years were sheer magic as Pearl Street came to life.

New restaurants and businesses opened. The Häagen-Dazs ice cream shop replaced the venerable Valentine’s Hardware store on the southwest corner of Pearl and Broadway —but not before the sheriff carried a box of crystallized dynamite out of Valentine’s basement.

So many musicians wanted to perform on the mall, the city created a two-musician-per-block limit. Boulder discovered it had not just improved Pearl Street — it had built a sprawling village square that redefined the look, feel and character of the town.

In retrospect, I think it did something else: The Pearl Street Mall drew Boulderites and the university community closer together.