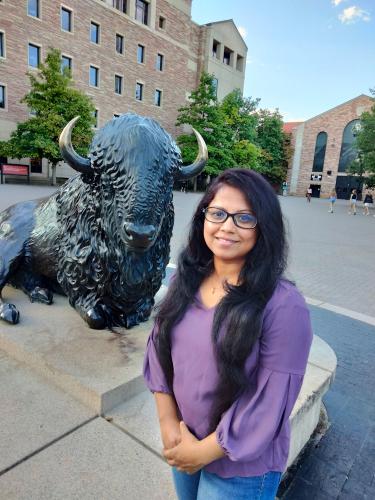 For a decade, Sima Bhowmik (PhDJour’24) worked as a journalist in her home country of Bangladesh. But she felt called to education in the U.S., despite not speaking fluent English.

After a journalism fellowship from the State Department and the completion of the U.S. English testing requirement in only four months, she obtained a scholarship to attend the University of Mississippi for her master’s in journalism. She started the doctoral program in journalism at CU Boulder in 2020.

But the pandemic made the move to Boulder difficult for her and her husband.

“We couldn’t meet anyone. Everything was on Zoom,” Bhowmik said.

Bhowmik volunteered on campus in 2021. She welcomed students to campus with the New Student and Family Programs office and worked with the Graduate and Professional Student Government to advocate for graduate students and help build community. She also became a Forever Buff s Network ambassador through the Alumni Association.

“Many people asked me, ‘Why are you doing this?’” she said. “But these things were important to me.”

Through her online role with the Alumni Association, Bhowmik spoke with alumni who joined the Forever Buffs Network, a free platform that functions like a CU-only LinkedIn, about their college experiences.

“Sima is incredibly talented and impressive, and she and her work are doing a lot to raise the status of CU,” said Stanczak, who lives in Brookline, Massachusetts. “Her perspectives and experience offer a wildly diff erent viewpoint and help me better understand how I might contribute to a stronger Buff s alumni network.”

Bhowmik, who also teaches media law and ethics at CU, plans to graduate two years from now with her doctorate and hopes to someday land a permanent job in academia.

“Connections are really important,” she said. “I want to have some impact on the CU Boulder culture.”