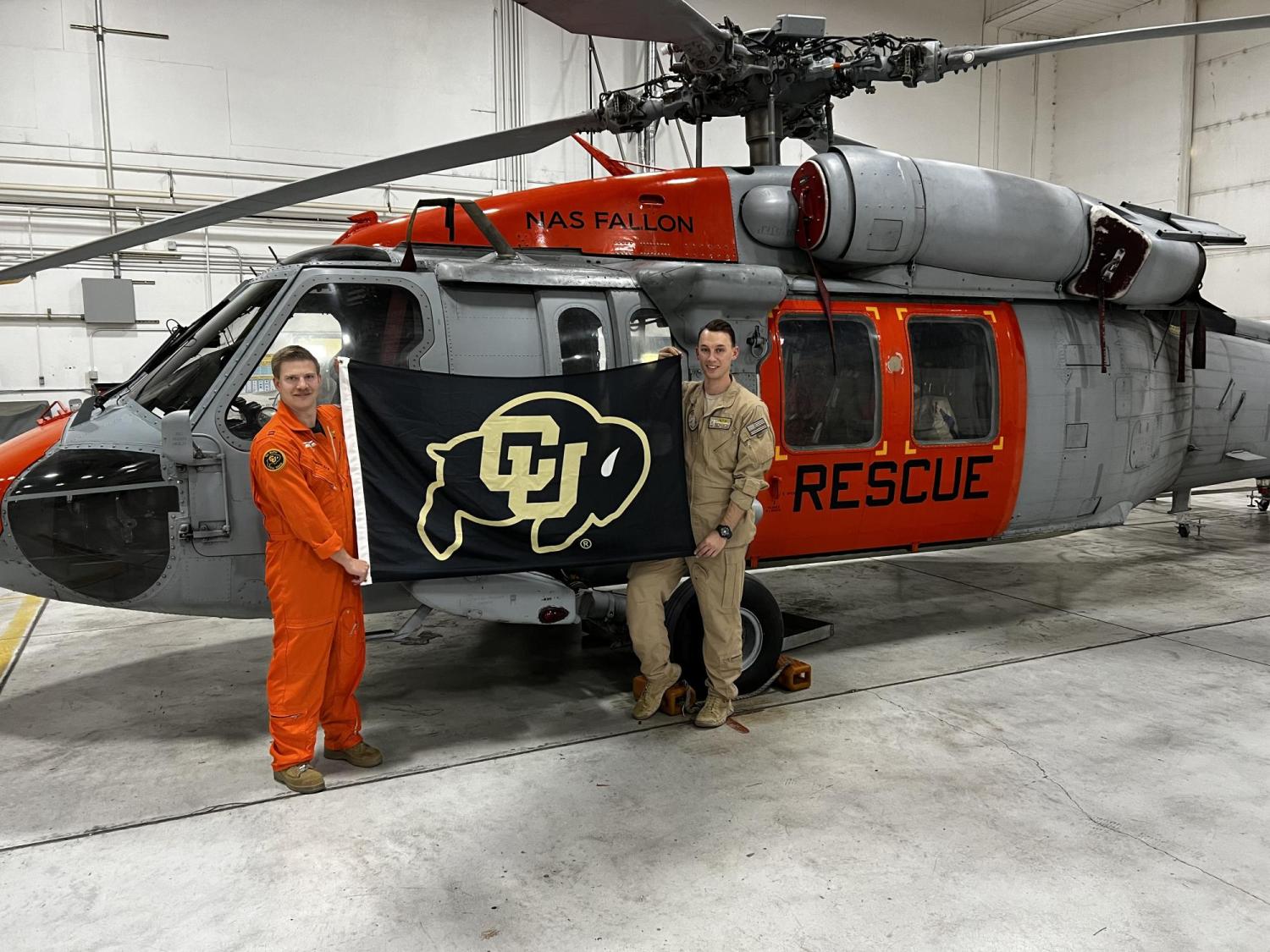 Conrad Schmidt (left) and Josh Schaffer (right) of the Search and Rescue Team at the Naval Air Station Fallon in Nevada.

On Oct. 21 the Search and Rescue Team at the Naval Air Station (NAS) Fallon in Nevada received a call that a geologist conducting field studies in the nearby mountains fell and dislocated his knee. He was stuck on the steep terrain.

Hospital corpsman Josh Schaffer (Pscyh’14) and Lieutenant Conrad Schmidt (AeroEngr’13), a pilot, were on duty at the time. The pair — both CU alumni who met at the air station — helped orchestrate the rescue.

The NAS Fallon search and rescue team provides medical coverage for military operations while also servicing surrounding communities. Located in mountainous northern Nevada, team members train and specialize in high-angle recovery, a type of rescue used in remote and extreme terrain which requires extraction via a helicopter and its hoist — the cable system that allows cargo to be raised and lowered. Many of their search and rescue missions involve lost, fallen or injured hikers, skiers and backcountry enthusiasts.

Schmidt — who joined CU’s Naval Reserve Officers Training Corps and was selected to become a pilot after graduation — said flying in Fallon was some of the most dangerous, yet rewarding in the Navy.

“Apart from beautiful scenery and sunsets, I find that I am 10 times a better pilot by flying in this unforgiving environment,” said Schmidt, who served in Atsugi, Japan, for three years before moving to Fallon in 2018. “Not to mention that you may save a few lives and help out people in need along the way.”

On the day of the rescue, Schaffer — who enlisted in the Navy in 2015, pursued military medicine and joined the NAS Fallon crew in 2019 — received the call at his house. The county sheriff and paramedic had arrived on scene but were unable to safely remove the injured man from the hillside.

Schaffer and Schmidt’s crew was dispatched and launched.

Approximately three hours later, the aircrew arrived in a helicopter with Schmidt and the others on board ensuring the aircraft’s safety and stability in the air while Schaffer rappelled down and assessed the geologist’s injury. Schaffer was calm and collected.

“We go through so much training and preparation; it’s just repetition,” he said. “So, when I’m down there with a patient, I don't feel a lot of nerves. Plus I am a big jokester, so I’m trying to make sure the patient has as good of a time as possible.”

Schaffer placed the man on a spine board and waited for the helicopter to get overhead. The steepness and slickness of the terrain made it a very technical rescue, he said. As the helicopter came closer, the air currents created by the helicopter sent loose rocks and dirt flying and Schaffer began to slip down the hillside. The crew chief sent down the hoist and Schaffer had to work quickly to hook up the geologist.

Once all was cleared, Schaffer and the man were lifted into the helicopter, landed at the nearby airport and EMTs took over the geologist’s care. From there he was taken to the hospital where he was released within 24 hours and had no further complications.

Schaffer said, “It feels good to help somebody who’s having a really bad day — maybe the worst day of their life — and being able to say, ‘You just focus on you. I’ll take care of the rest,’ and getting them safely back to their families.”