“There’s a lot going on in our industry,” CU Athletic Director Rick George said. “This alliance allows us to collaborate on these issues and bring stability to college athletics and the collegiate model.”

Such issues include evolving NCAA legislation on name, image and likeness (NIL); the expected expansion of the College Football Playoff; and conference instability, notably Texas and Oklahoma leaving the Big 12 for the SEC (effective 2025). To start, the alliance will encourage more interconference scheduling, multi-team, single-site events featuring teams from all three conferences and increased national television exposure.

With its 41 institutions united, the alliance could determine the future of the College Football Playoff, while also combining the resources of its research universities to improve student-athlete health and wellness. 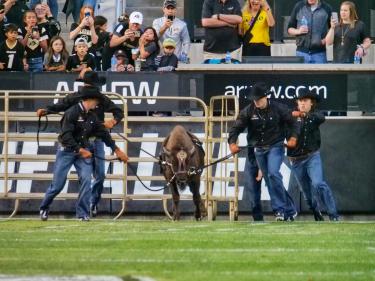 Coach Talk
“The crowd was absolutely fantastic. This has been the best environment since I’ve been here in my 10 years. This needs to be the standard for CU soccer, not the exception.”

$1
Bonus Spencer Dinwiddie (Comm ex'15) will receive, per his three-year, $62-million contract with the Washington Wizards, if the team wins the NBA championship

15th
Stage of the Tour de France won by Sepp Kuss (Advert’17) in July, the first American to win a stage of the race since 2011