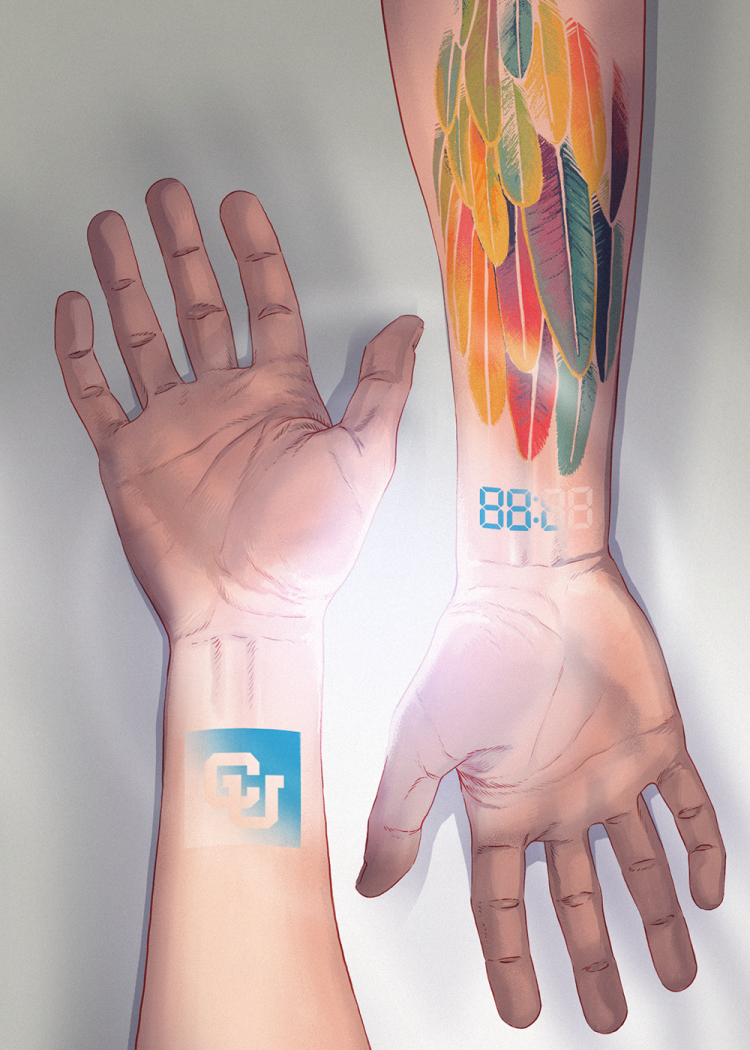 Carson Bruns was 19 years old when he got his first ink.

During a study abroad program in 2005, he spent a month in monasteries nestled in the mountains of Japan. When he returned home, Bruns got a tattoo of the Japanese character for “mountain.”

“It was a profoundly meaningful experience for me, and I wanted something to mark that moment in my life,” said Bruns, assistant professor in the Paul M. Rady Department of Mechanical Engineering and CU Boulder’s ATLAS Institute, an interdisciplinary institute for radical creativity and invention.

He isn’t alone. Archaeologists and scientists have evidence of tattoos on six continents, some dating back millenia. And for the growing numbers of Americans with body art, tattoos can be deeply personal.

But Bruns, a chemist by training, has wondered if tattoos could do more.

Over the last four years, the scientist and his colleagues at CU Boulder have worked to bring body art into the realm of science fiction. This spring, the team started a collaboration with the CU Anschutz Medical Campus to test out a tattoo ink that’s completely invisible — and could lower your risk of skin cancer, much like a “permanent sunscreen,” he said. At the same time, he and doctoral student Jesse Butterfield (MMechEngr’17; PhD’23) have launched a company called Chromopraxis that will soon sell the first commercially available, color-changing tattoo inks.

To show off his newest tattoo, inked in July, Bruns takes out an ultraviolet flashlight and shines it on his wrist. In a few seconds, a series of blue numbers slowly appear — 88:88, like the display on a digital clock.

Bruns explained that this particular ink is activated by ultraviolet light. In most settings, these inks are invisible, but can appear in a wide range of colors when exposed to direct sunlight.

“The idea is that you can use light to reprogram it to say any four numbers or letters that you want,” Bruns said.

And while these creations might sound like the stuff of cyberpunk fiction, Butterfield explained that these inks are surprisingly low-tech. The team first suspends bits of polymer material into a special liquid mixture, which causes them to glob together and form tiny spheres. Researchers then embed the spheres with dyes.

“It’s like a salad dressing where you have to shake it up to mix the oil and vinegar together,” Butterfield said. “We do the same thing, but with really high-powered equipment.

“It was a profoundly meaningful experience for me, and I wanted something to mark that moment in my life.”

Jars of rainbow-colored inks sit around the lab: milky-white fluids that turn magenta under ultraviolet light and  a green that changes to yellow before disappearing again.

However, his team’s latest focus is a tattoo ink that doesn’t have any color at all, but can, theoretically, shield human skin from incoming rays of sunlight. They nicknamed the product Invelanin, a mash-up of “invisible” and “melanin.”

“The idea is that you’d get this invisible tattoo once on your head and neck, where 80% of skin cancers occur. Then, you might have a lower cancer risk for years or decades,” Bruns said.

The researchers have since procured a $150,000 grant from the Colorado Office of Economic Development and International Trade to further develop Invelanin. They’ve also partnered with Dr. Rajesh Agarwal at CU Anschutz to test the ink’s safety and how effective it is at lowering skin cancer risk.

Whatever the results, Invelanin won’t be on the market for years. But Bruns and Butterfield are hoping to bring their color-changing inks to tattoo parlors across the country soon — connecting to a community that, like them, wants to reimagine the tattoos of the future.

And, for Bruns, it all began with that one Japanese character: “This project came from a special place in my heart I have for body art.” 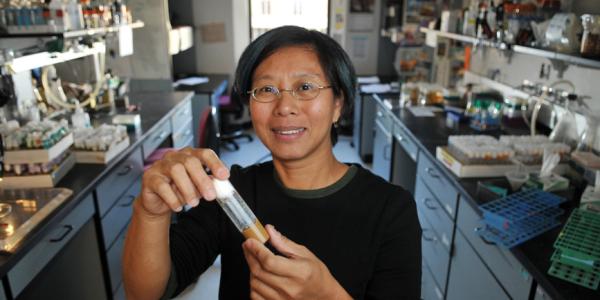 Flying in the Face of Cancer

Cancer is the country’s No. 2 killer, following heart disease. Professor Tin Tin Su is working to develop powerful new tools in the fight against the deadly disease. END_OF_DOCUMENT_TOKEN_TO_BE_REPLACED

In Bruce Lee, CU's Daryl Maeda sees a symbol of the modern world — and the subject of his next book. END_OF_DOCUMENT_TOKEN_TO_BE_REPLACED

We stock our shelves with books and pills intended to make us happy, but CU psychologist June Gruber warns that too much of a good thing can backfire. END_OF_DOCUMENT_TOKEN_TO_BE_REPLACED