Your picture and story about Professor Nilon [“THEN September 1963,”Summer 2021] brought back fond memories.

Coloradan for the Family

A quick note to say I’m only halfway through the new Summer 2021 Coloradan, and I’ve already torn seven pages out to share: one for my husband (“Life, Reincarnated”), two for my 7-year-old (“An Olympic CU Legacy”), two for my 9-year-old (“Pups of CU” and “Climate Change Causes Mammal Range Shifts”) and two for my 12-year-old (“Digits” and “Buffs at Bat”)! Thank you for publishing interesting content that I can share with my future Buffs! 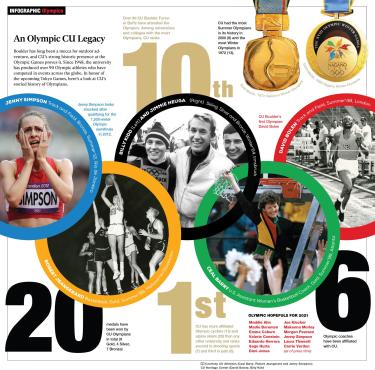 On pages 33-34 [“An Olympic CU Legacy,” Summer 2021], your photo spread shows “Billy Kidd (Econ’69) and Jimmie Heuga (PolSci’73)” in the center photo. Actually, the picture is of Billy Kidd and coach Bob Beatty. That said, the Innsbruck Olympic team with Kidd, Heuga and Jim “Moose” Barrows (Mgmt’70) was awesome.

Editor’s Note: We sincerely regret our misidentification of Jimmie Huega and coach Bob Beatty, especially from such a memorable time and photo. Thank you to all of the readers who alerted us immediately of the error. The online article and downloadable PDF of the magazine reflect a corrected version of the photo.

More on Aerosols and COVID-19

I found the comments by David Dennison (MechEngr’73) in his letter concerning clarinets and aerosol distribution very interesting. I find myself comparing the response to COVID-19 and the response to the Asian flu in 1957. That year, I was a music education major enrolled in the required clarinet class.

The university’s response to the Asian flu? I never noticed a response! Students rented instruments for the wind classes from the university; two students rented the same instrument. I never met the student who shared my instrument, but I believe I caught the flu from that student. We did have our own reeds, but we used the same mouthpiece. I was terribly ill for two weeks. Finally, when I was well enough to drag myself from class to class, I appeared at the studio door of the visiting piano professor who had taken the place of my regular professor who was working on his doctorate at Eastman. “Well, you should have had plenty of time to practice,” she said.

Does the university still rent the same instrument to more than one student? Surely it does not!

I have a pet peeve that we should be called Coloradoans not Coloradans. So I found an article online you had in 2019 [“Origins: Coloradan or Coloradoan,” Spring 2019] that I tend to disagree with. I know it isn’t a big deal, but every time I hear what I feel to be incorrect, it drives me crazy! So I would appreciate it if you could help me spread the word that we should use Coloradoan more often.

Editor’s Note: Revisit a previous issue to read about the beginnings of the term “Coloradan”.

The Legacy of Carroll Hardy

Life is beautiful when you take time to look. This applies to the football field as well.

The late Carroll Hardy (A&S’55) was one of Dal Ward’s best ever and should have been remembered in your Coloradan with a full page. During 1950 to 1954 Hardy and Frank Bernardi (Mktg’56) were nationally known on the CU football team, and both men continued as very special people in later life.

I am responding to an entry in Class Notes, page 55, Summer 2021 edition. Edward F. Altman (Fin’56) is searching for a classmate that he would like to contact. I am not a classmate (I graduated in 1957 in aerospace). But I had a fraternity brother in the Phi Kappa Tau Greek fraternity who was my pledge “father” named Ed Altman, who was from my hometown of Pueblo, Colo. He and I were not close friends, and after graduation we both went our separate ways, never crossing paths after leaving Boulder.

In June 1957 when I graduated, I immediately moved to the Dallas area to take a job as an engineer with Chance Vought Aircraft, and nine months later entered the Air Force, attended pilot training and followed a world-wide career path as a pilot until March 1984, when I retired in Annapolis, Maryland, to do a second career as a professional engineer and project manager with a defense contractor. I retired for good in June 2017 and am living in Annapolis with my wife and golden retriever.

The Stones in Concert

I was at the 1981 Rolling Stones concert in Boulder. We were up front and Mick Jagger put a scarf around my neck at that concert. I was wondering if there is a picture of that? That day was one of the best days of my life. We rode our Harley to that concert. I don’t know the biker that lifted me up so Mick could put the scarf around my neck, but it was a great moment in my life. I am getting older, and my grandchildren know the story and I would like to have a picture to share with my grandchildren.

How about a commemorative plaque in 2028 placed at Folsom Field honoring the 50th anniversary of the Rolling Stones playing there on July 16, 1978? It would further endear Folsom Field to a great moment in history and would be recognition of an event not necessarily affiliated with CU Athletics.