No More Next Times: Q&A with Olympic Marathoner Jake Riley

When Jake Riley (MMechEngr’21) ran in the Olympic Marathon Trials Feb. 29, he didn’t think he’d qualify for the Games — until he reached the last 10 meters of the race. After four years as a student athlete at Stanford, a professional running career, struggles with injuries and finally a move to Boulder to study and train, Riley competed at the trials with his mantra “no more next times” in mind. He placed second with a time of 2:10:02, and is headed to Tokyo this summer for the Olympics. Here, he reflects on his earliest wins, the importance of balance and the motivation of self-improvement.

How did you get started as a runner?

In elementary school in New Zealand, I went to a city cross-country meet. I didn’t know much about running, but I went. When I got there — I was a third grader, so take this with a grain of salt — I won it. That was a really big deal for me. I got a medal; I wore it around all the time. So that kind of gave me my first little taste.

Then in middle school, after we’d moved back to the States, on the first day of track they took all of the sixth graders around and had us try out all the events. There was this kid who was just crushing everyone in everything. He won the high jump, he won the 100m; he won pretty much all of it. Then in the 1600m run, I beat him. That was a very big deal for me. I think that was kind of my first introduction to winning and to the idea that this was something not only I am good at, but that I am good at in comparison to other people. It was something that was kind of mine.

How did you go from the 1600m race to the marathon now?

Well, it’s always just been whatever was the longest event I could do. I think by most standards I’m fast, but by professional standards I’m not that quick. But I’ve got staying power; I can tough it out. My skill set is about being able to hold a moderately difficult pace for a really long time. Every time I move up in distance, I’ve been more successful, so it was inevitable that I would eventually get to the marathon. I have not started doing ultramarathons yet, but I think it’s only a matter of time.

You just graduated with your master’s degree, so you were training for the Olympics while you were studying mechanical engineering. What was that like?

I was dealing with not being able to find a job, and feeling like I had some unfinished business with running. I figured I could work part time, go to school part time and I could train. I was looking for places I could find a challenging academic career and a solid running community. Boulder checked those boxes. I got into CU and worked on grad school part time; I got a job working as an SAT tutor.

Since making the Olympics, my trajectory has changed a little bit. But eventually, I’d like to work in athletics. I’d love to do shoe design. Something along the lines of creating the next generation of training shoes.

What advice would you give to young athletes with Olympic dreams?

Balance, I think. In general, I see a lot of people who think that in order to be successful at your sport it has to be all that sport all the time. It’s really easy to get burnt out because running is a huge time commitment. Sports take a lot of emotional energy; they take a lot of physical energy. That’s hard to sustain over a whole Olympic cycle or even a whole season.

I’m in one of those sports — and I would say gymnastics, swimming, a bunch of these other ones, too — that’s only popular every four years. That means you’ve got four years when you’re digging in the trenches, you’re in the dark, and you’ve got to sustain that high emotional energy, focus and drive. That can be draining. It’s really, really helpful to have something else there.

Would you say that you’re more motivated by achievement or do you really just love the act of running? 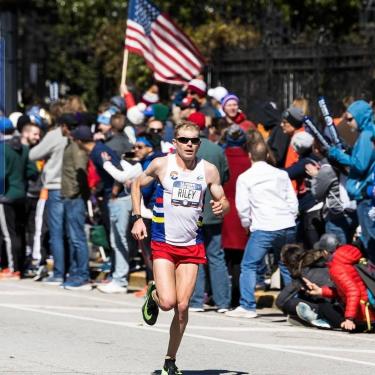 I wouldn’t necessarily say I’m motivated by achievement. I watched that Michael Jordan Last Dance documentary and he talked about how every time he went on the court he had to win. I don’t have quite that solely-motivated-by-competition fire.

I do think my motivation is partly success related, but also partly about how much better I can be than I was last time. When the training is doing what you wanted it to do, that feels amazing. And then the cherry on top is when you can take the buildup and time commitment and put it into a race to see the results. So, some of it is self-improvement. But a little bit of it is, yeah, running can be fun.

What is your favorite training trail near Boulder?

We start at Marshall Mesa Trailhead, and then you can go underneath HWY 93 — it’s called Community Ditch. So, you take Community Ditch and then there’s this loop we do through El Dorado Canyon Park.

First of all, on Community Ditch you’re running right toward the mountains. You’ve got the Flatirons laid out in front of you over this gorgeous plain. Then you get a bit of the hills and you run through the pines. After that, it leads you through this little slot canyon in El Dorado. There’s a whole bunch of little places you can add on if you want. It’s a soft surface, technical trail without being too technical. I love it.

What do you do for fun?

I have all the subscription services. But I guess it’s kind of tiresome for me to say I’m watching Game of Thrones for the second time. We also go camping. I love Estes Park. I met my girlfriend through pub trivia, so we do a lot of that. More of that is online since COVID. If I weren’t training, I might go with some friends to play volleyball in Denver.