Home Class Notes Books By Alums Jabberwocky: Lessons of Love from a Boy Who Never Spoke

Jabberwocky: Lessons of Love from a Boy Who Never Spoke 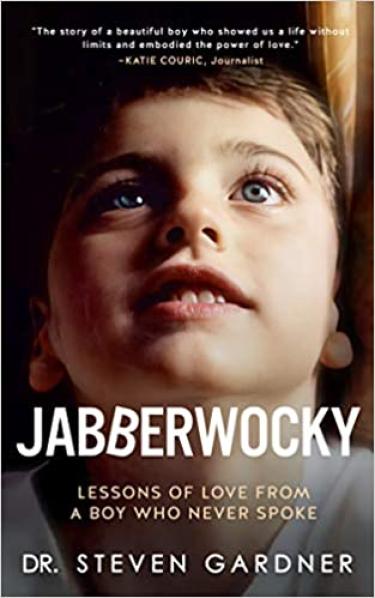 Graham Hale Gardner died before turning twenty-three and never learned to walk or speak due to severe cerebral palsy complicated by epilepsy. Yet he left a legacy of love and compassion that deeply moved scores of people from widely different backgrounds.

How was that possible?

Graham’s story, written through the eyes of his father, speaks of the enormous legacy left by a boy who never spoke. A story that raises provocative questions about the “invisible lines of connection” that make us human.

Graham was a strikingly beautiful boy who faced formidable challenges on a daily basis that most of us will never encounter. His ability to confront adversity with resilience and grace astonished and inspired nearly everyone whose lives he touched.

On the bucolic island of Martha’s Vineyard, at a pioneering summer camp for the disabled, a place “where hope flourishes,” Graham and his father become camper and camp doctor. There, they encounter an eclectic group of people who eat, work and create together. They write and cry together. They argue and dance together.

Camp Jabberwocky, as it is widely known, embraces the boy and his father and they become part of a passionate and zany extended family that will forever change how they see the world.

As the years pass, Graham and his parents experience both surprising adventures and formidable challenges. Wherever they live and travel, they encounter people who are drawn to Graham. These people, from widely different backgrounds, want to be near him, to assist in his care and to laugh with him. To them, the person they uniformly cherish is nothing less than a living angel.

Can we imagine living in a parallel universe known as “Jabberwocky,” where people open their hearts and minds to those who are different and nobody is left behind?