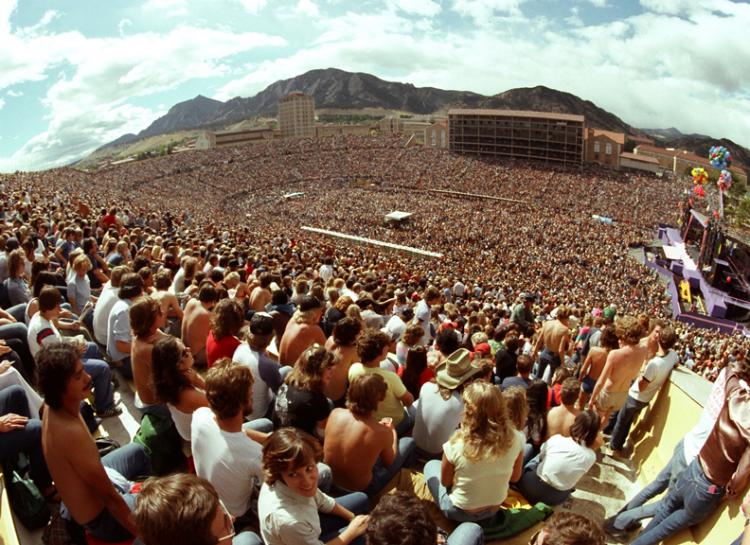 Folsom Field during The Rolling Stones concert in 1981. Photo by Michael Goldman (Pharm'78).

Whether they're dancing until they can’t stand or simply watching the guitarist shred a solo, the people of Boulder love their concerts. CU has hosted many amazing artists over the years, representing everything from classical cello to electronic dance music. Here are 10 great concerts performed at CU Boulder.

Glenn Frey, singer and guitar player for The Eagles, was known for wearing University of Colorado T-shirts at concerts. Some think the five-night stint of shows the group played at Tulagi on the hill in their early career gave the school a special place in Frey’s heart. Once they garnered major fame, The Eagles played Folsom Field on July 29, 1978 during their Hotel California Tour. The band opened with “Hotel California” and ended with a four-song encore of “Rocky Mountain Way,” “James Dean,” “Take It Easy,” and “Tequila Sunrise.”

In March 1999, the legendary Dave Matthews played with Tim Reynolds at Macky Auditorium. Later, in 2001, the Dave Matthews Band played Folsom Field on their promotional tour for the album Everyday. The group played 15 minutes over their allotted time and incurred a $15,000 fine from the university — $1,000 per minute. They played so long and so loudly that concerts were suspended from Folsom Field indefinitely. It wasn’t until Dead & Company played in 2016 that Folsom Field saw another show.

Yo-Yo Ma, widely considered the world’s greatest living cellist, graced CU with his presence at Macky Auditorium in 2017. Ma is credited for invigorating classical music through his collaborations across all genres and cultures.

Van Halen played Folsom Field in July of 1986 as a part of their 5150 tour. They opened with a cover of “You Really Got Me” by the Kinks and closed with “Ain’t Talkin ‘bout Love” before a two-song encore.

Mick Jagger and the rest of the band played three times at Folsom Field. In July 1978, the group opened with a cover of Chuck Berry’s “Let It Rock.” They came back in October 1981 to play two more shows in promotion of their “Tattoo You” album.

In July 1980, Cheap Trick played Folsom Field with three other bands as a part of the Colorado Sun Day series. The series featured concerts at both Folsom Field and Mile High Stadium throughout the '70s and '80s.

Representing the realm of newer music, Zeds Dead, a Toronto-based producer/DJ duo, performed at CU’s 2019 WelcomeFest. Although they play a variety of genres, Zeds Dead is best known for being a leader in electronic dance music.

In 1977, Fleetwood Mac played the Folsom Music Festival as a stop on their Rumors tour. They opened with “Don’t Stop” and closed with the iconic “Go Your Own Way.” The event drew a record crowd of 61,500 people.

The Beatles singer performed at Folsom Field in May 1993. His set included many of his most famous songs, like “My Love” and “Hey Jude.”