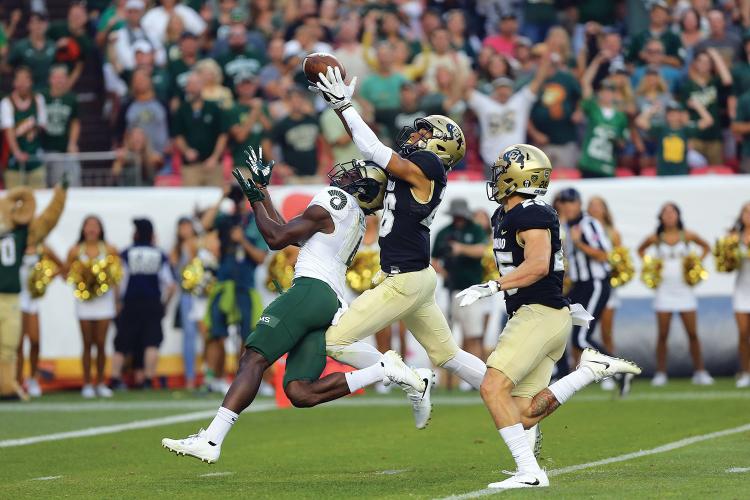 One Buff heard his named called during April’s NFL Draft, and as many as nine others will get a chance to earn roster spots this summer.

Isaiah Oliver (StComm ex’19) became the fourth CU defensive back drafted in the past two years when the Atlanta Falcons picked him in the second round (58th overall). He’s leaving CU a year early but believes he’s ready to face the NFL’s big-time receivers.

“Being a bigger corner, this what I pride myself on, going into those games and being able to stop them,” Oliver, who also was a two-time All-Pac-12 athlete in the decathlon, told the Atlanta Journal-Constitution.

Oliver was the only Buff drafted, but he’s not the only one moving on to pro football.

Running back Phillip Lindsay (Comm’18) will get a shot with his hometown team after signing a free agent deal with the Denver Broncos. CU’s all-time all-purpose yards leader tweeted, “I want to thank the @Broncos and @johnelway for believing in me and seeing what I can bring to the program. I look forward to repping my home state. #303 #DenverMade #NFL.”

CU receivers Devin Ross (Soc’17) and Shay Fields (Soc’18) signed with the Titans and Redskins, respectively. Offensive lineman Jeromy Irwin (Comm’17) is headed to the Saints. Safety Afolabi Laguda (Econ’17) will try to catch on with the Rams. Four additional Buffs were invited to participate in NFL rookie mini-camps.

Bob Beattie, who coached CU’s first national championship ski team, died April 1 at 85. Beattie coached the Buffs for nine years and led CU to back-to-back NCAA championships in 1959 and 1960. He also was the head coach of the U.S. Olympic Alpine Ski Team when Billy Kidd (Econ’69) and Jimmie Heuga (PolSci’73) won silver and bronze medals, respectively, at the 1964 Innsbruck, Austria, games. … Senior John Souza (Econ’18) was named the Pac-12 Men’s Golf Scholar-Athlete of the year. At the time of the announcement, the economics major had a 3.32 GPA. … Men’s golf finished second to USC in the Pac-12 Tournament in April. The Buffs’ previous best finish in the tournament was fourth, in 2014. … In April, women’s tennis beat Utah for the first time since joining the Pac-12.

Times this season lacrosse player Darby Kiernan (IntAf’18) was named Pac-12 Player of the Week. In one game she set a CU record with 10 points.

Buffs who earned All-America honors at the 2018 NCAA Skiing Championships.