Lacrosse Lays Claim to a Title 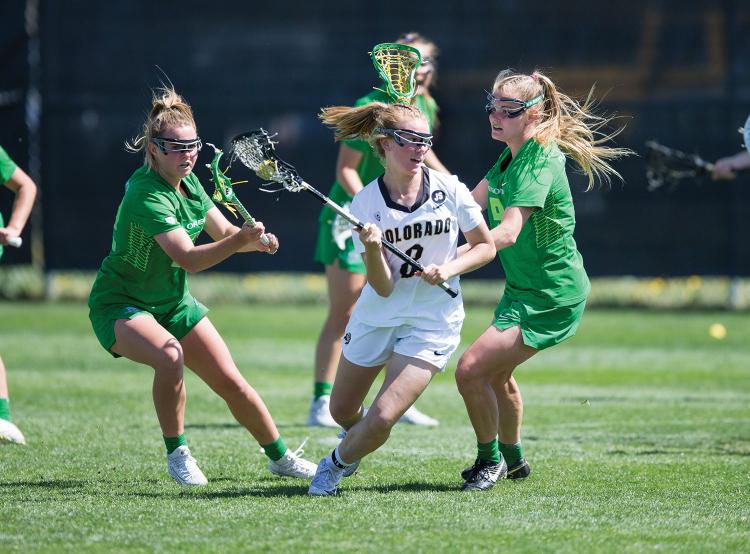 It’s fun to be first.

In 2011, the CU men’s and women’s cross-country teams both won at the inaugural Pac-12 championship meet.

In 2018, CU women’s lacrosse became the first-ever regular season Pac-12 champs after finishing 9-1 in the conference and 12-4 overall. CU’s lone conference loss was in overtime at USC.

Unfortunately, Buffs lacrosse fell short of yet another first: Seeded No. 1 in the conference tournament, held in late April in Boulder, the team ran into a No. 2-seed Stanford squad bent on redemption. The Cardinal, which had lost two regular-season games to the Buffs, steamrolled CU 15-6.

“We got frustrated, we did dumb things and we weren’t tough enough to battle back against a team that’s very tough,” CU coach Ann Elliott said after the loss.

The tournament started in promising fashion. CU had earned a first-round bye, then cruised past Oregon 16-6 in the second round.

But Stanford came out hot in the title match at Prentup Field, on April 29. Leading 7-2 at halftime, the Cardinal padded its lead with three goals in 34 seconds and four total in the first 2:35 of the second half.

The loss meant the Buffs, then ranked 14 in the nation, had to rely on an at-large bid to reach the NCAA Tournament. They got it, and advanced to the round of 16 — the only Pac-12 team to do so —before falling to Florida 13-9.