From Free-Throws to F-35s 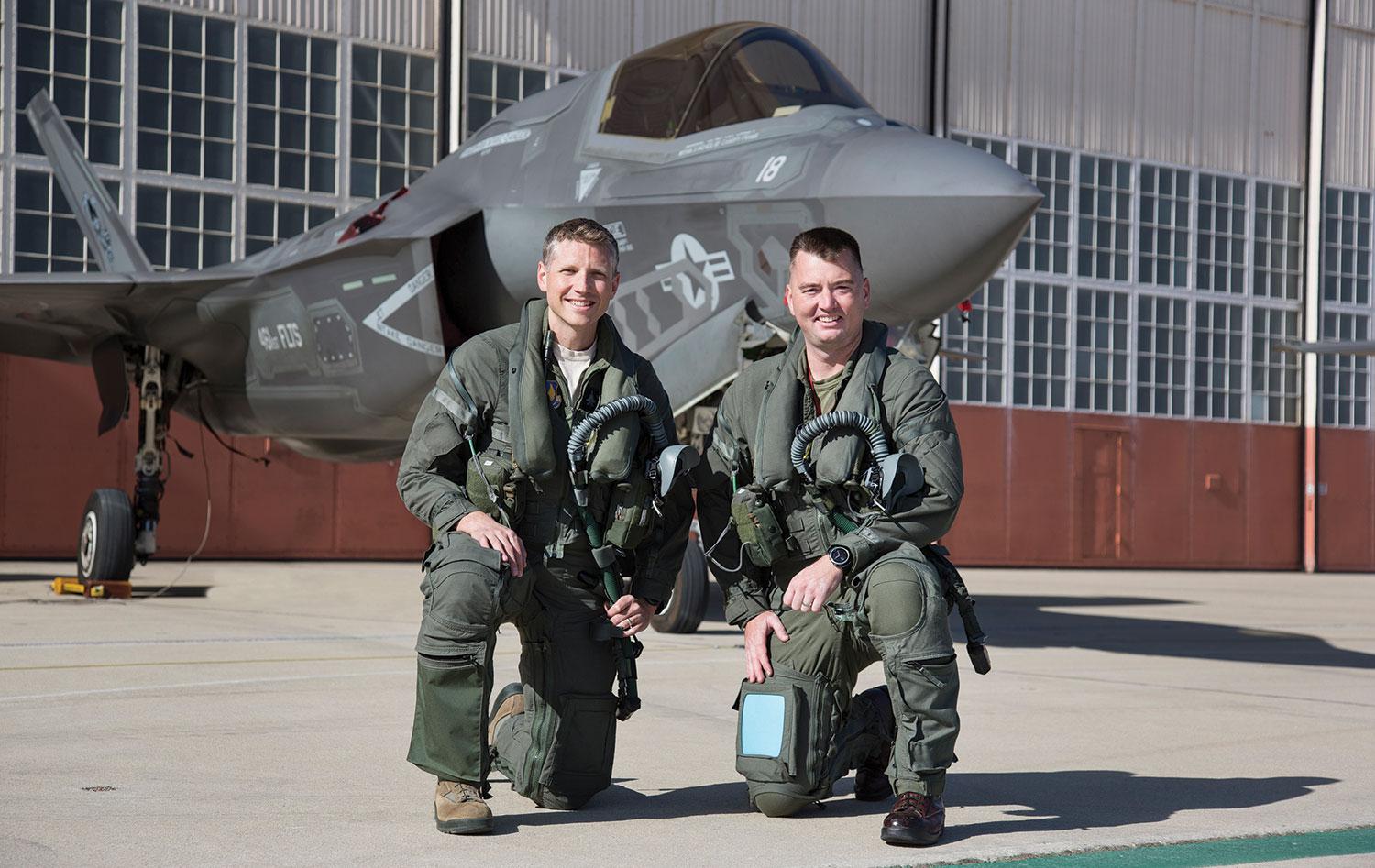 Tucker Hamilton and Aaron Frey are test pilots for the U.S. military’s most sophisticated fighter jets ever. Their journey together started in middle school.

Two F-35 fighter jets zoom over the Pacific Ocean. The pilots, charged with completing a live missile test, are focused, confident and prepared. Even in a test mission, lives depend on it.

They’re not alone. A fleet of aircraft, boats and about 100 control room communicators follow their every move on this summer day.

A pair of missiles fires from one jet, striking their targets: Airborne drones. The other F-35, armed with its own missiles, holds fire amid the explosion. The moment — painstakingly calculated and rehearsed — simulates the highly complex air-to-air scenario F-35 pilots could encounter in real combat. All total, the day’s mission costs $1 million.

The F-35 jets, based at California’s Edwards Air Force Base, are considered the most sophisticated military fighter jets in history, and the Defense Department’s largest ever acquisition program, at more than $1 trillion. Hamilton and Frey are among some 20 total test pilots for the F-35, also known as the Joint Strike Fighter. For their August missile test last year with the 461st Flight Test Squadron, they were two of just 13 pilots who could have flown the mission.

Hamilton uses one word for their repeated encounters in life: “Serendipity.”

“Being able to develop the most advanced aircraft to ever take to the skies, with one of my buddies from middle school, was a complete kick,” he said.

As 13-year-olds, Hamilton and Frey attended the same birthday parties and played on the same basketball team. Hamilton was a forward. Frey played guard.

“As I recall, he was a little taller than I was,” Frey joked.

The boys from Evergreen lost touch after enrolling at different high schools, then reconnected in Air Force ROTC and aerospace engineering classes during their first semester at CU in 1998. 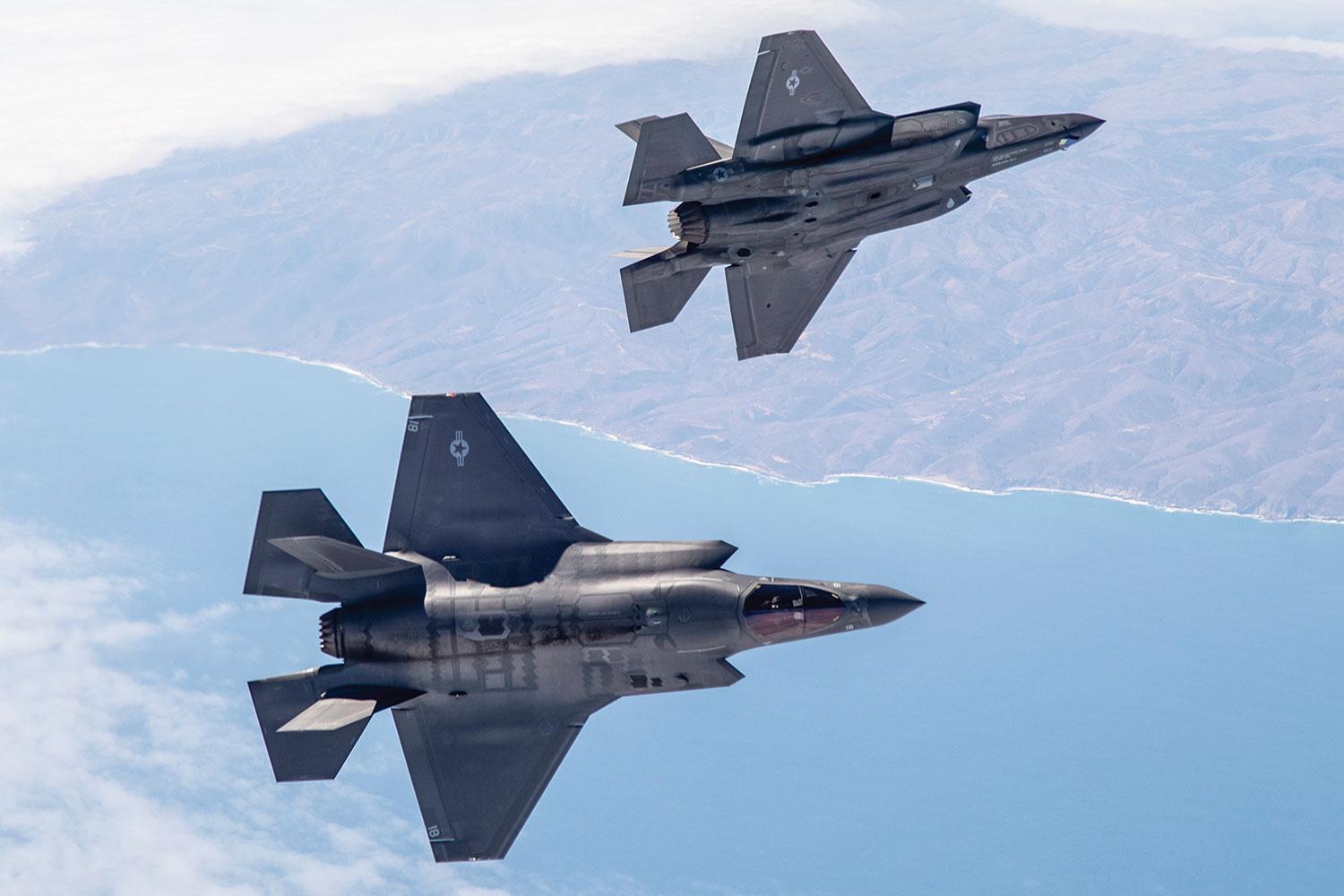 In 2002, they again went separate ways and lost contact: Frey stayed at CU for a master’s degree in aerospace engineering; the Air Force commissioned Hamilton the day of graduation.

Hamilton, then a lieutenant, moved to Florida, completed pilot training with the Navy and, later, the Air Force, and became a combat-ready F-15 fighter pilot. After a stint in Germany, he spent time in Afghanistan with the MC-12 intelligence, surveillance and reconnaissance aircraft unit. His interest in engineering, technology and flying drew him to apply for test pilot school. In 2011 he was among 10 pilots selected to train at Edwards to become a F-35 test pilot.

“I wanted to develop leading-edge technology and get it into the hands of our warfighters,” he said.

Meanwhile, after briefly working on satellites in the private sector, Frey joined the military, in 2004.

“I always was interested in flying airplanes and the military,” he said. “When I was working as an engineer, I realized, ‘If I want to do this, I need to do this now.’”

He joined the Marines, became an officer and deployed to Afghanistan twice, flying combat missions and serving as an instructor pilot. While in Afghanistan in 2012, he too was accepted into the Edwards test pilot school.

When Frey arrived in California for training, Hamilton had just finished the program. The two passed each other in a hallway.

“Fast-forward to 2012, 10 years nearly to the day [from CU graduation],” said Hamilton, now married with four children. “And I’m walking through the U.S. test pilot school about to graduate, and Aaron Frey walks by in his Marine flight suit.

The two briefly caught up. They’d both known danger.

In early 2008, for instance, Hamilton was involved in a 500-mph, mid-air collision with another jet during a F-15 flight over the Gulf of Mexico. Flames engulfed his plane, and he ejected into the ocean. The other jet’s pilot died instantly. Hamilton floated in the ocean, alone for hours, until a 25-foot fishing boat rescued him.

But Hamilton remained a pilot, and became an advocate for new safety measures. He was the first pilot to test the Automatic Ground Collision Avoidance System on fighter jets — technology that corrects an airborne plane in an emergency. It has since been installed on several aircraft and saved eight lives so far.

“I know the experience made him a better pilot,” said Frey, who’s encountered frightening situations of his own.

“Managing risk is part of the job.”

In 2016, four years after their hallway meeting, Hamilton became director of operations for the 461st Flight Test Squadron, which tests all three variants of the F-35 fighter jets: The F-35 A, for conventional takeoffs and landings; B, for short takeoffs; and C, for landing on aircraft carriers. Frey’s name was listed as a test pilot with the squadron.

“I didn’t realize Cinco was in my squadron,” said Frey. “I walk in and, again, there he is!”

The F-35s — made by Lockheed Martin — are top of the line, with technologies, weapons, sensors and equipment never used before.

Endless scenarios for each variation need testing by the squadron. Hamilton and Frey have tested all aspects of each variant of the single-seat planes.

Today, Hamilton remains commander of F-35 developmental test efforts at Edwards, leading nearly 1,000 people. In October, Frey, a married father of twins, was promoted to operations officer of the Marine Operational Test & Evaluation Squadron 1 at the base. He tests the F-35s in extreme military scenarios, such as landing an F-35B in frigid temperatures in Alaska.

“Our wives know each other, our kids play together,” said Frey. “Once you’re squadron mates, you really stay in touch for the rest of your life.” 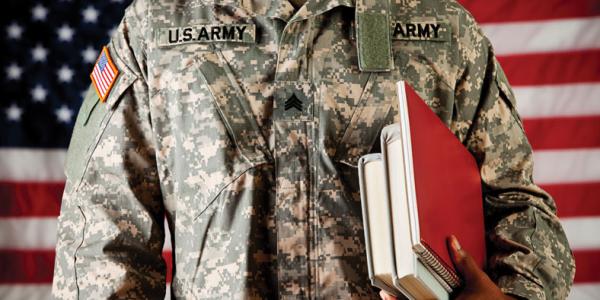 From Battles to Books

As U.S. involvement in Iraq and Afghanistan winds down, veterans are filling classrooms across the nation, including at CU-Boulder. END_OF_DOCUMENT_TOKEN_TO_BE_REPLACED 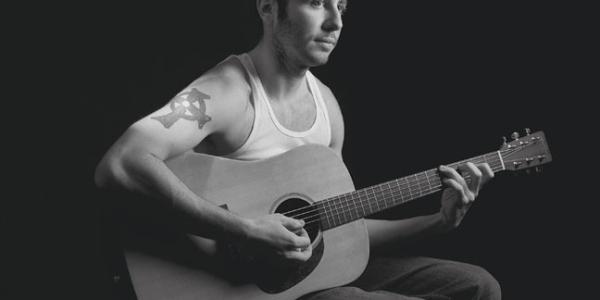 From Soldier to Student

David Hoch is one of an estimated 400 military veterans who attend CU Boulder today. END_OF_DOCUMENT_TOKEN_TO_BE_REPLACED 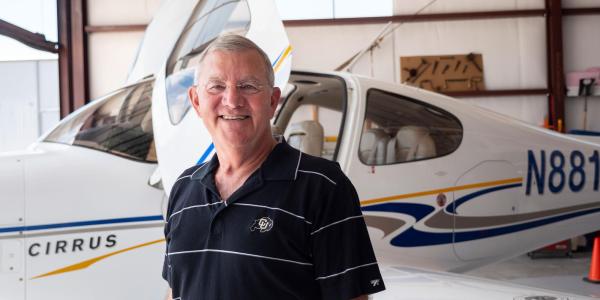 Jim Voss has been to space five times. He can handle the Houston-to-Boulder commute. END_OF_DOCUMENT_TOKEN_TO_BE_REPLACED