Even for a Grammy Award-winning group, playing all 17 Beethoven quartets in live concert is an act of daring. Takács Quartet likes a challenge.

They were four musicians in a small room, just back from a performance in Los Angeles. Spring had come to Boulder and seemingly gone. Outside, wet snow fell thickly. Inside, water boiled for tea.

“He’s looking at the stars, right?” violist Geraldine Walther said as the ensemble, bows drawn, prepared to play a serene passage Beethoven supposedly wrote after a night of stargazing.

Soon the members of the Takács Quartet would be on the road again: Kansas City, Palo Alto and Philadelphia, then on to Carnegie Hall, the Kennedy Center and London’s Wigmore Hall.

But on this day, a Wednesday in late March, the string quartet was hunkered down in its studio at CU-Boulder’s College of Music, working through tricky parts of Dvorak’s Opus No. 105 and Beethoven’s Opus 59, No. 2.

The music started and — stopped.

Sound erupted again. To a visitor’s untrained ears, it all seemed masterful. But the quartet sensed ways to render the masterpiece more fully, subtly, better.

“Two before the fortissimo, the D-flat…” someone called out after another pause.

Practice is a constant for the Grammy Award-winning Takács Quartet (pronounced Toh-KATCH), one of the world’s great classical string quartets and a fixture at CU-Boulder since the founding members defected to the United States from Communist Hungary in the 1980s. Two founders, Fejér, 60, and violinist Károly Schranz, 64, remain with the group

“If we didn’t rehearse, we’d all show up and play the notes fine,” said Dusinberre, who recently published a memoir of life with the group, Beethoven for a Later Age: Living with the String Quartets (University of Chicago Press). “That’s a beginning. But there wouldn’t be a consensus.”

Practice is all the more vital when the upcoming season involves performing the complete cycle of Beethoven quartets — 17 works famed for their emotional intensity, epic contrasts of mood and stupefying technical complexity. Composed from 1799 to 1827 — as and after Beethoven went deaf — the pieces are hard to play, even for virtuosos intimate with the scores.

Dusinberre called the cycle “the Mount Everest for a string quartet.”

“To focus on it, you kind of have to clear the boards,” said Walther, 65, who joined Takács in 2005, after 29 years as principal violist of the San Francisco Symphony. “It’s a real commitment. Emotionally. Spiritually. Physically. These pieces have drama.”

Founded in Budapest in 1975 by Gabor Takács-Nagy and three fellow music students — Schranz, Fejér and Gábor Ormai — the Takács Quartet came to international prominence before the decade was out, winning first prizes in a series of major European competitions.

Dénes Koromzay, a fellow Hungarian who taught at CU after retiring from the Hungarian String Quartet in 1980, invited the group to perform at CU during its debut North American tour, in 1982. (As accomplished artists, the Takács members had travel privileges not then afforded to most Hungarians.)

The ensemble found Boulder a congenial place to focus on music without the distractions of life under communism. They also found a patron in Denver native Fay Shwayder, a daughter of the Samsonite luggage founder with a talent for tennis and piano and a love for classical music.

In 1986, after subsequent lengthy visits to Colorado, the original Takács members and their families defected and settled in Boulder. With initial financial support from Shwayder, who died in 2005, the group has been in residence at CU-Boulder ever since.

In the ensuing three decades, Takács has solidified its position as one of the world’s premier classical string quartets. The group performs about 80 concerts a year, including dates at some of the world’s most famous concert halls.

Nominated for Grammys five times, most recently last year, Takács won one in 2002, for an album of middle Beethoven quartets. The quartet has performed with the actors Meryl Streep and Philip Seymour Hoffman and with the poet Robert Pinksy. In May the group was scheduled to record its 18th album at a studio in Wales.

(Over time, the Takács lineup has changed: Founder Takács-Nagy left in 1992, soon succeeded by Dusinberre, then 24 and straight out of Juilliard. Violist Roger Tapping played with Takács for 10 years following co-founder Ormai’s 1995 death. Walther joined in 2005 after Tapping moved to Juilliard.)

Amid all the rehearsing, performing and globetrotting, the musicians tend to duties on campus, where they are formally Christoffersen Faculty Fellows. In addition to playing 10 sold-out concerts each year, they mentor younger string quartets also in residence at CU and give lessons to advanced string students.

“Most top university music programs have professional string quartets in residence, but we’re unusually fortunate to have had the Takács on our faculty for more than three decades,” said Robert Shay, dean of the College of Music. “They are unquestionably one of the world’s finest quartets.”

All four Takács members live in or near Boulder and rehearse together at the College of Music. Lately they’ve been playing a lot of Beethoven. In its long history, the quartet has performed the complete Beethoven cycle several times, most recently in London in 2009, and recorded all 17 pieces. And yet playing them to the musicians’ own satisfaction is a fearsome endeavor.

This is due partly to the works’ composition over decades: They manifest the dramatic evolution of Beethoven’s epic powers and the turbulent feelings of the deaf genius, who could hear his creations only in his imagination.

“It’s like a journey,” said violinist Schranz. “You can go into this composer’s mind.”

Also, there are many ways to interpret the quartets, none easy to execute, and there’s the matter of reconciling the varying interpretations of four master musicians. Then there’s the trial of physically performing the music: Playing the full cycle takes about 12 hours. (Takács plays them in six two-hour concerts, each with selections from the early, middle and late quartets.)

“Our minds are usually ahead of our physical abilities,” said cellist Fejér. “You’re constantly trying to catch up with what you’re hearing in your mind.”

For the musicians, of course, the Herculean nature of the task is part of its appeal.

“If there were only one way to play them,” said Dusinberre, “we’d have stopped a long time ago." 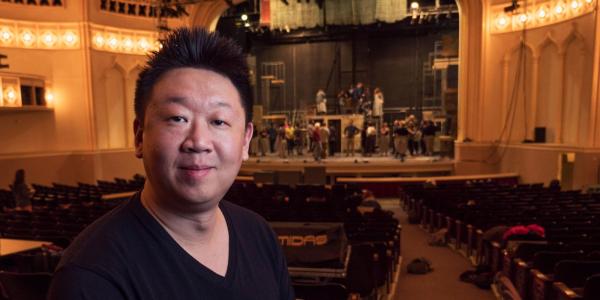 Wei Wu came to the U.S. from China in 2007. Now he's got a Grammy. END_OF_DOCUMENT_TOKEN_TO_BE_REPLACED