Defender from Down Under 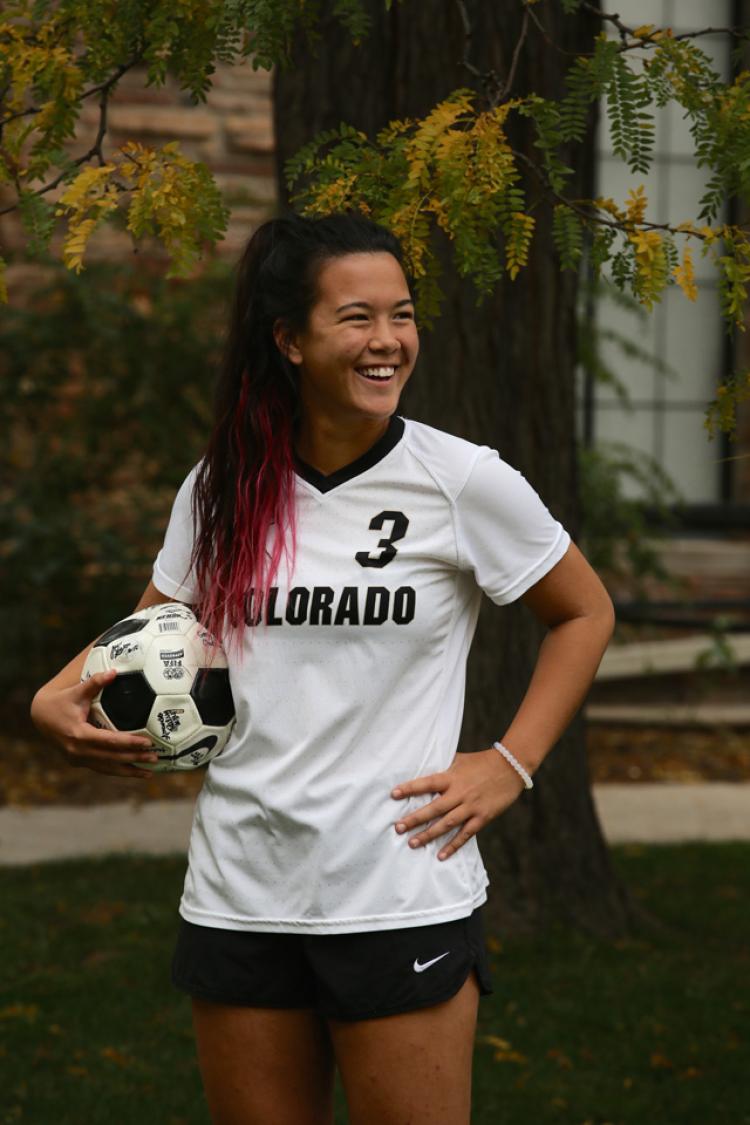 The views of the Flatirons from campus are famous and hard to beat. For Alex Huynh (Psych’17), they were a total surprise.

When Huynh became the first Australian to join the Buffs soccer team, in 2013, she’d been to the U.S. once, to California, and CU coach Danny Sanchez had originally recruited her to play at the University of Wyoming while he was coach there.

And Huynh has indeed found a lot to love about Boulder: The sunshine, the friendly people, “the super chill vibe.”

But first there was a rude awakening: Three days after landing in Colorado, the sea-level soccer star staggered through her first Buffs fitness test and promptly passed out. Boulder is situated 5,368 feet higher than Sydney.

“That was a nice welcome,” says Huynh, who’s from Sadleir, New South Wales, a Sydney suburb.

Huynh, 21, acclimated, of course, and has made a noticable impact on the team with a positive vibe “that’s kind of infectious,” says Sanchez. He had no doubt she’d persevere and succeed here, having seen her play as a high school student in Australia.

“She got her nose smashed in and was bleeding everywhere,” he recalls. “She just stuck a tissue in there and went right back in. We could tell she had toughness.”

That’s a useful trait in sport and life. Huynh left her entire family behind in Australia, including twin sister Samantha.

“Sometimes we underestimate how difficult it is,” Sanchez says of foreign athletes playing college sports in the U.S.

There are 2,646 international students at CU, including 33 Australians four of whom are student athletes.

Huynh admits to a bit of culture shock.

“I didn’t really know anything about the college experience except what you watch in the movies, you know what I mean?” she says. “I literally had no idea what I was getting myself into. I just knew I wanted to play soccer.

“It’s not like that in Australia at all. When you go to uni, people don’t live on campus, there’s no frats and stuff, so that was definitely an eye-opener.”

As it happens, half the Australians playing varsity sports at CU are soccer players: Senior Kahlia Hogg, Huynh’s former teammate on the Australian junior national squad, transferred from Florida State in 2014.

Even with Hogg’s familiar presence, Huynh says living far from home is actually harder now than when she first came to CU. As a freshman, everything was exciting and new. In the last two years, she’s only been home once. A scheduled trip last summer was canceled because the Buffs were in Spain for matches.

Sister Samantha visited over the summer, though, and the twins made the most of the time by traveling to Hawaii and then to Canada for the Women’s World Cup. Alex and Samantha sat front row for the U.S. vs. Australia game in Winnipeg. (The Americans won 3-1, en route to the title.)

“Ninety-eight percent of the fans were for America,” Huynh recalls. “It was chockers.”

Chockers, by the way, means full.

Huynh’s schedule is chockers, too. Between playing for the Buffs, working on a degree in psychology and trying to squeeze in Skype sessions each “fortnight” (two weeks) with her sister, who is 17 hours ahead, Huynh says she doesn’t have much free time during soccer season.

Now that it’s over, she’ll likely dedicate some time to improving her snowboarding technique.

“I’m want to smash it out this winter for sure,” Huynh says. “I’m still shredding with 5-year-olds and they’re killing me.”

Huynh also wants to hike a 14er before she leaves Colorado, even though she admits that she hates hiking.