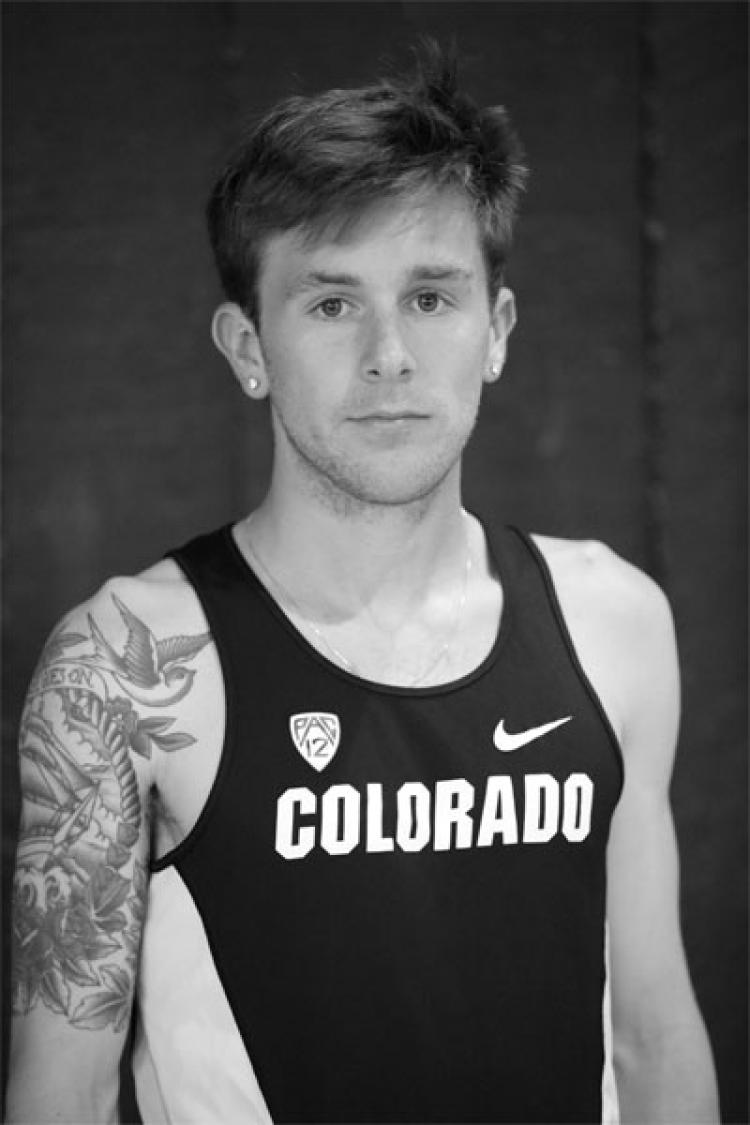 Jake Hurysz (Comm’15) was nervous when he stepped to the starting line of the track at the University of Washington last February. Three minutes and 58.13 seconds later, he crossed the finish line as the fastest man to ever complete a mile race in a CU uniform.

Hurysz finished fifth overall in the mile race, at the Husky Classic, but he’s now tops in Buffs’ history, besting past CU stars that include U.S. Olympians Alan Culpepper (Geog’96) and Adam Goucher (Comm’98). Not bad for a few minutes work.

“It’s awesome to have a school record here,” says Hurysz, 22, of Mebane, N.C. “I think that means more to me than breaking 4 (minutes). I’ll have more opportunities to break 4 (minutes) in my career and even lower my personal best. … I really wanted a school record and the guys that have come through this program, it makes it kind of a big deal for me.”

Stephen Pifer (Geol’08) was the previous school record holder in the mile (3:59.55 in 2006) and among the first to congratulate Hurysz. Colorado assistant coach Billy Nelson (Hist’08) called Pifer from the Dempsey Indoor track, then handed the phone to Hurysz moments after he finished.

“I think I said – I can’t remember because I was on such a high – but I think it was like, ‘Looks like you’re second on the list now,’” Hurysz jokes. “… He’s a good guy, a friend of mine. He gave me a lot of encouraging words going into the race. I saw him at the cross country championships (in Boulder the week before) and he believed in me, he thought I could get it.”

Head coach Mark Wetmore also believed in Hurysz, calling him highly motivated and focused. Combine those qualities with his training and it wasn’t surprising to Wetmore to see Hurysz break the record.

“We were pretty sure he’d run fast,” Wetmore says.

Despite having inspirational words tattooed inside his arm and on his hip – “wierzyć” Polish for “believe” because it reflects his heritage and “esperer” French for “to hope” because his mother speaks the language – Hurysz felt less confident.

“I (had not) done a workout all year that would indicate that I could break 4 minutes, so that’s why I was really nervous,” says Hurysz, whose previous best mile time, 4:06.18, came in high school. “If I had been crushing things all winter, then maybe I would (have been) be a little more confident going in.”

Hurysz says his plan was to find his way to the middle of the pack and hang out there for a while. But when he heard his split times during the race he realized he was on pace to break the hallowed 4-minute mark and set the CU record.

At the 1,200-meter split, “I knew I was going to break it because I was feeling really strong,” he says. “I felt really comfortable there, and then I was able to kick a little at the end.”

The 3:58:13 mark remains Hurysz’s personal best, but it’s not his only sub-4-minute mile: A month after the race in Washington, he finished his preliminary-round race at the NCAA Indoor Championships in 3:59.93. He is the only Buff to have run two sub-4-minute miles in competition.