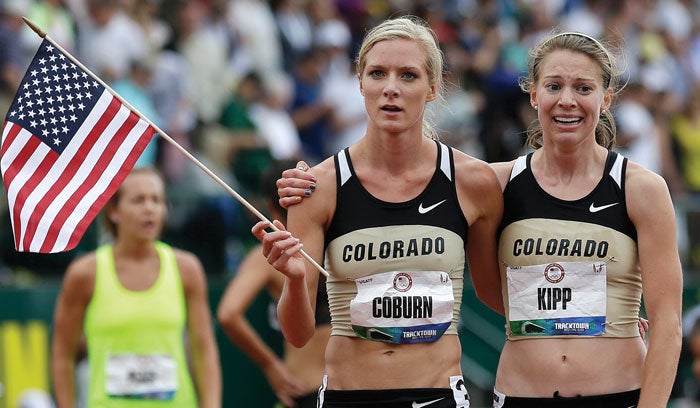 Emma Coburn, left, and Shalaya Kipp, right, both seniors, represented CU and the United States in the steeplechase at the London Olympics.

There’s something about the women’s 3,000-meter steeplechase that’s brought out the best in CU competitors in recent years. And 2012 is no different as Buff athletes Emma Coburn and Shalaya Kipp made the three-woman U.S. Olympic steeplechase team. Coburn won the U.S. title in the event and Kipp captured the NCAA championship.

Jenny Barringer Simpson (Econ, PolSci’09), who started CU’s domination in the event, takes pride in what the Buffs have accomplished in the steeplechase in recent years.

“I feel like in a really, really special way, even though I’ve moved on from the event, I’ve maybe left a little bit of a legacy there,” says Simpson who concentrates on the 1,500 meters.

“Emma and Shalaya have done an incredible job. I’m so excited for them, and I’m glad all three of us can be on the (Olympic) team.”

When it comes to major titles in the women’s steeplechase, no school rivals CU. In which years have current and former CU runners won the event in the NCAA Championships and USATF nationals?