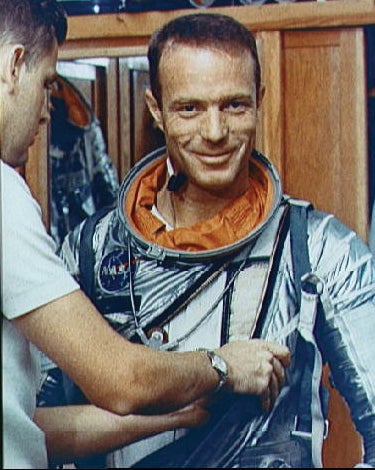 I’ve been thinking a lot about Richard Gertsch (A&S’69) lately because I’ve been thinking about the 50th anniversary of Scott Carpenter’s (Aero’49, HonDocSci’00) orbital flight on May 24, 1962, and the melancholy state of the space program. The iconic image of today’s program is that of a 747 hauling the space shuttle Discovery to the National Air and Space Museum in Washington, D.C.

About the only thing Gertsch had in common with Carpenter was that he had been in NROTC and went into the Navy after he graduated. Gertsch’s major was ancient history.

Gertsch wasn’t an astronaut. He just dreamed like one.

Somewhere along the way Gertsch decided he wanted to mine the moon. And Mars. And asteroids.

And after he finished his hitch in the Navy he enrolled at Colorado School of Mines and turned himself into a mining engineer.

Over the next three decades he produced a torrent of papers, reports and conference presentations making the case for mining the moon and the asteroids and showing in detail how it could be done.

His papers had titles like “Mining Near Earth Resources,” “Excavation on the Moon and Mars,” “A Baseline Lunar Mine” and “Asteroid Mining.”

People have talked about extraterrestrial mining for decades. What set Gertsch apart was he was a Ph.D. mining engineer — with a historian’s perspective.

Gertsch believed that for space exploration to move beyond the science-project stage to the business of opening a new frontier, it would need energy and raw materials in quantities too large to be hauled up from Earth. And therefore extraterrestrial mining and manufacturing were the keys to space colonization.

Gertsch, who was my friend, died in 2005. So he didn’t live to see the press conference held at the Seattle Museum of Flight on April 24 where it was announced some of America’s more visionary (and deep-pocketed) entrepreneurs had bankrolled a company called Planetary Resources whose purpose is to mine asteroids.

At times company founder Peter Diamandis sounded like he was channeling Gertsch when he described the company’s vision.

“If you look back historically at what has caused humanity to make its largest investments in exploration and in transportation, it has been going after resources, whether it’s the Europeans going after the spice routes or the American settlers looking toward the West for gold, oil, timber or land,” Diamandis said.

Or as Gertsch put it in 1991, “Humankind will live in space. It is only a matter of time. Like the other frontiers of human history, miners will lead the way.”

Gertsch knew firsthand that no force on Earth is more infuriatingly frustrating than an idea that has come before its time. But I think his idea’s time has finally come. And not a moment too soon.