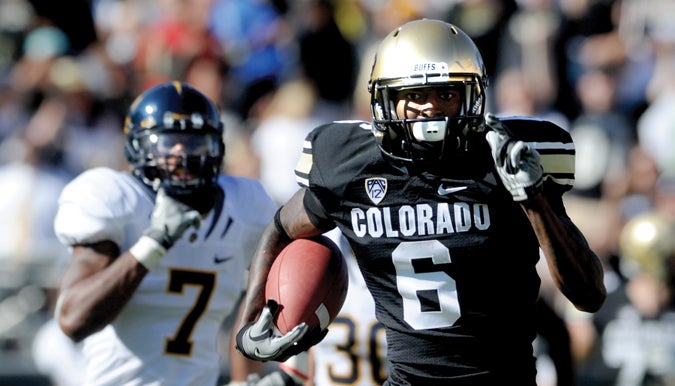 Football practice starts Aug. 7, but with Paul Richardson out for the season with a knee injury, the 30 newcomers to the roster will have their work cut out for them.

Ideally, spring practices are supposed to resolve many issues for a college football team. But for CU, the spring produced almost as many questions as answers.

Most notably, loss of big-play junior wide receiver Paul Richardson to a knee injury and uncertainty about who will start at quarterback in 2012 left much to be settled when practices start Aug. 7.

The Buffs suffered a major setback during spring practice when Richardson tore a knee ligament during a noncontact special teams drill. He’s expected to miss the entire 2012 season and redshirt.

“Obviously, it’s a blow to our team, but it’s a part of the game,” coach Jon Embree (Comm’88) says. “It’s a shame because he’s worked real hard and was doing a great job both on and off the field, leading by example and improving on all the things he needed to work on.”

Richardson made a big impression last year, especially in setting a single-game school record with 284 receiving yards and tying another with 11 receptions in an overtime loss to California. During the last two years, he’s accumulated 1,069 yards receiving.

One thing that is clear is many of the roughly 30 newcomers to the roster will play a key role in the upcoming season after 28 seniors wrapped up their careers.

A familiar name will join the Buffs in August. T.C. McCartney, grandson of former CU head coach Bill McCartney, will be an offensive graduate assistant for the coaching staff in 2012.