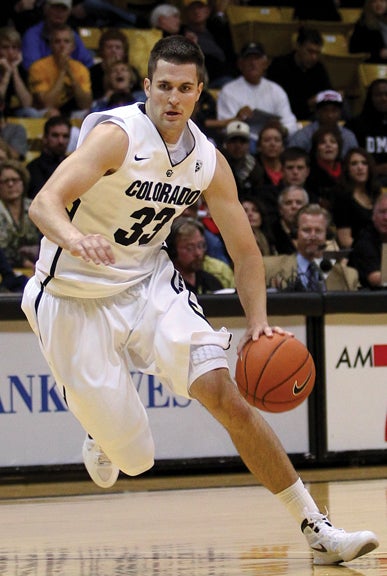 In six foot-nine senior Austin Dufault (Psych’12), who was lighter and faster in 2011 compared to 2010, the men’s basketball team had a player who took his game up a notch.

In what was supposed to be a rebuilding season, the CU men’s basketball team lowered the boom on many an unsuspecting opponent.

And when the dust cleared, coach Tad Boyle’s Buffs had amazed just about everyone.

CU matched the school record for wins in a season (24, set last year), posted back-to-back 20-victory seasons for the first time in program history, won the Pac-12 tournament in its first season in the conference and recorded the Buffs’ first NCAA tournament win in 15 years.

Not bad for a team picked in the preseason to finish 10th in the Pac-12 by the media.

“Everything that we’ve accomplished has been really special and something I’ll never forget,” says senior Austin Dufault (Psych’12).

As for coach Linda Lappe’s (Mktg’02) CU women’s team, it recorded its first 20-win season since 2003-04 in going 21-14 and advancing to the quarterfinals of the Women’s NIT for the second consecutive year.

During the season, Boyle and Lappe received contract extensions that will run through April 30, 2016.

In April, Lappe lost one of her assistant coaches when Jennie Baranczyk landed the head coaching job at Drake University.