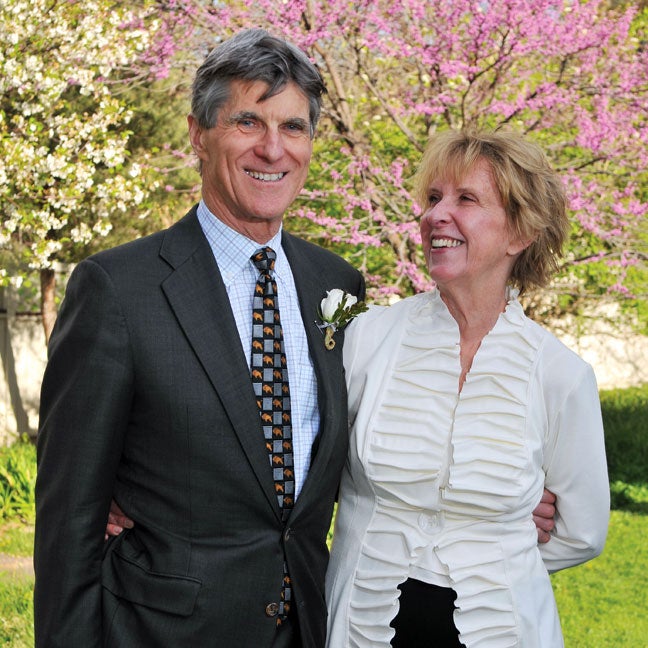 Law dean David Getches and his wife, Ann Getches, are shown at the Koenig Alumni Center in May.

If you had taken a boat up Washington’s Nisqually River with CU law dean David Getches and headed west down a muddy creek, you might have seen the remains of a 100-foot Douglas fir tree along the banks.

Until it died in 1979, the Treaty Tree was the only living witness to the 1854 signing of the Medicine Creek Treaty. The treaty guaranteed area Native Americans the right to harvest salmon from the Nisqually River whose headwaters swim down the slopes of Mount Rainier in their 80-mile journey to the Puget Sound.

For decades, the state of Washington disregarded the treaty, limiting native fishing rights. But 40 years ago, Getches decided to breathe new life into old treaties in the courts. In doing so,
he changed the course of Native American history.

When he successfully litigated the landmark 1974 United States v. Washington case, the court not only restored salmon rights to Indian tribes but acknowledged their sovereignty. Getches spent the rest of his career as a national authority on water, Indian and public lands law while remaining passionate in the classroom and as dean.

“David came along at exactly the right time for the American West, which has undergone such sweeping changes over the past half century,” says CU law professor and longtime friend Charles Wilkinson.

“As a wise advocate and leading public intellectual, David brought vision, common sense and passion to pressing issues of water, land and Indian rights . . . We will not see his kind again.”

Last fall Getches announced he would resign as dean in June 2011 after eight years of service. The 68-year-old had planned to return to the classroom, but it wasn’t to be.

He passed away from aggressive pancreatic cancer on July 5. He is greatly missed by the CU family, Indian tribes, conservationists and the hundreds of people whose lives he impacted.

Under Getches’ tenure, the $46 million Wolf Law Building opened in 2006. The school expanded its academic offerings with three masters of law degrees, three new legal clinics, three certificate programs and eight dual degrees. He also increased scholarships, which was one of his highest priorities — providing access to law school for people who couldn’t afford it.

The Treaty Tree died of disease five years after Getches litigated the 1974 landmark case that transformed federal Indian law. Perhaps the grand old dame of a tree knew she could finally rest after hovering for more than a century over the floodwaters of injustice. After all, she knew of a young man with an easy smile and a tireless passion for restoring others’ rights to their rivers, lands and dignity. The West would never be the same.

May you rest in peace as well, David.