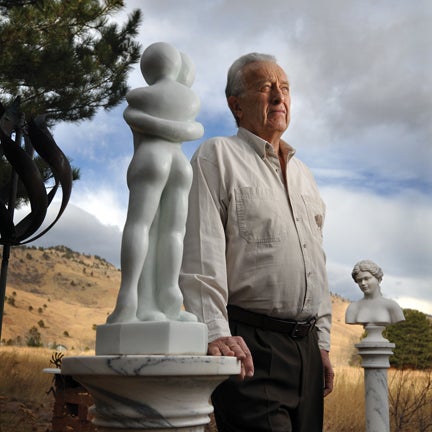 I found the March 2011 edition of the Coloradan most heartening. My reaction was generated by the articles on professor Bob Sievers’ work to invent an inhalable measles vaccine [“The man fighting measles one breath at a time,” pages 8-13], and distinguished professor Linda Watkins’ discoveries related to pain management [“Closer to a cure?” pages 30-33]. Congratulations and thank you to them and their team members.

While pondering the significance of these breakthroughs, I was disheartened, though, that reports of such efforts and accomplishments seem confined to the pages of a university alumni magazine or obscure scientific journals. Decades ago just about everyone knew that Thomas Edison invented the telephone and Jonas Salk developed the polio vaccine. Nowadays most people never hear of these laudable achievements. Indeed, a new product or invention typically reaches the public’s attention only via advertising that is paid for by and credits a corporate manufacturer.

A funding source, undoubtedly, is important if not crucial to many discoveries. We should never forget, however, that individual thought and persistence are the components without which nothing is learned and no public benefit is realized.

Perhaps one of these years the mass media will brighten our days by reporting on the work of a distinguished professor Watkins or professor Sievers. Isn’t such news at least as important to us as today’s stock market report, last night’s hockey scores or tomorrow’s weather? 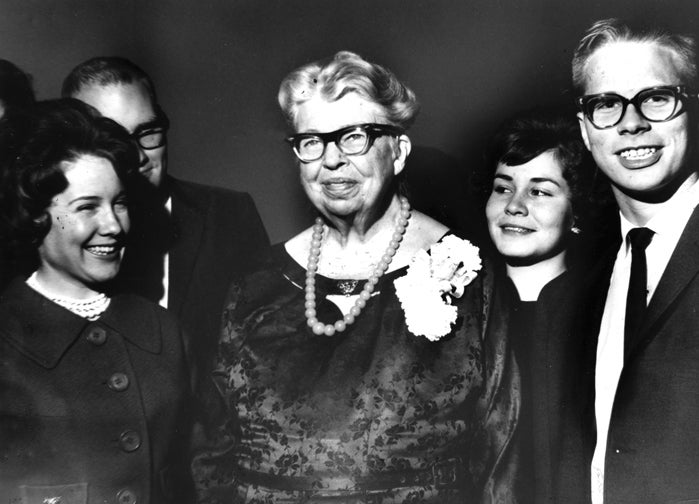 Judy Dodge (Mus’62), vice president of the student body, Allen Nossaman (Jour’62), former editor-in-chief of the Colorado Daily, Eleanor Roosevelt, Kathleen Work (A&S’62), ASUC senator and Joe Bell (Math’62), president of the student body, pose for a photo on Nov. 30, 1961. Mrs. Roosevelt was invited to a dinner given by student government that night prior to a lecture she gave, Dodge recalls.

Judy Dodge (Mus’62), vice president of the student body, Allen Nossaman (Jour’62), former editor-in-chief of the Colorado Daily, Eleanor Roosevelt, Kathleen Work (A&S’62), ASUC senator and Joe Bell (Math’62), president of the student body, pose for a photo on Nov. 30, 1961. Mrs. Roosevelt was invited to a dinner given by student government that night prior to a lecture she gave, Dodge recalls.

The March 2011 issue of Coloradan is the best yet in your improved format. I even read the letters. It’s always good to read comments from Paul Danish (Hist’65) [“Jammin’ with The Woz,” page 17], of course, who continues to be wonderfully prickly.

But I must respond to the Eleanor Roosevelt question asked by John Southard (Geog’63). Ms. Roosevelt was on campus Nov. 30, 1961. Joe Bell (Math’62), president of the student body, and I, vice president, hosted a dinner for her and student government delegates prior to her speech that evening. I found her lively, inquisitive and very interested in what students had to say. I do have a picture of the event that I would be happy to send to your offices, if I can find it [see Judy’s photo above].

This is a follow-up to the letter from John Southard (Geog’63) in the March 2011 Coloradan. The Coloradan reported the Heritage Center and Conference on World Affairs staff were unable to confirm any of Eleanor Roosevelt’s visits to Macky Auditorium beyond May 1958. John wondered if she was at CU in the early 1960s. I can attest she delivered an address in Macky between September 1961 and her death in November 1962. I was a freshman in September 1961 and attended her address sometime between those dates. I did not go to summer school in 1962. The big event in the fall 1962 was the Cuban missile crisis.

In reply to John Southard’s (Geog’63) memory of seeing Eleanor Roosevelt at Macky in your March letters, my brother Eric and I recall seeing her there as well in 1961.

[Editor’s note: Thanks to many of you for writing and calling. Eleanor Roosevelt did visit in November 1961. We have updated our files to reflect this. And thanks to Judy Dodge (Mus’62) for digging up her photo from the occasion and mailing it to us.]

I just read the March issue of the Coloradan. I enjoyed the story on Mike Kaplan (IntlAf’86). I also was a member of the CU B Ski Team (1982-84) and C Team (1981) my freshman year and remember Mike well. Congrats to Mike on becoming the CEO of Aspen Skiing Co.

The “A” Team gets most of the press, but some of the “B” Team members move up to the varsity team. We all spent a lot of time on school and on the ski team. We had dry land training in the fall every afternoon and weight training Tuesday and Thursday mornings. By Halloween we started skiing every weekday afternoon at Lake Eldora and racing on the weekends all across the Front Range. This made for quite a challenge for class schedules and selections, not to mention any time for studying, eating and fun.