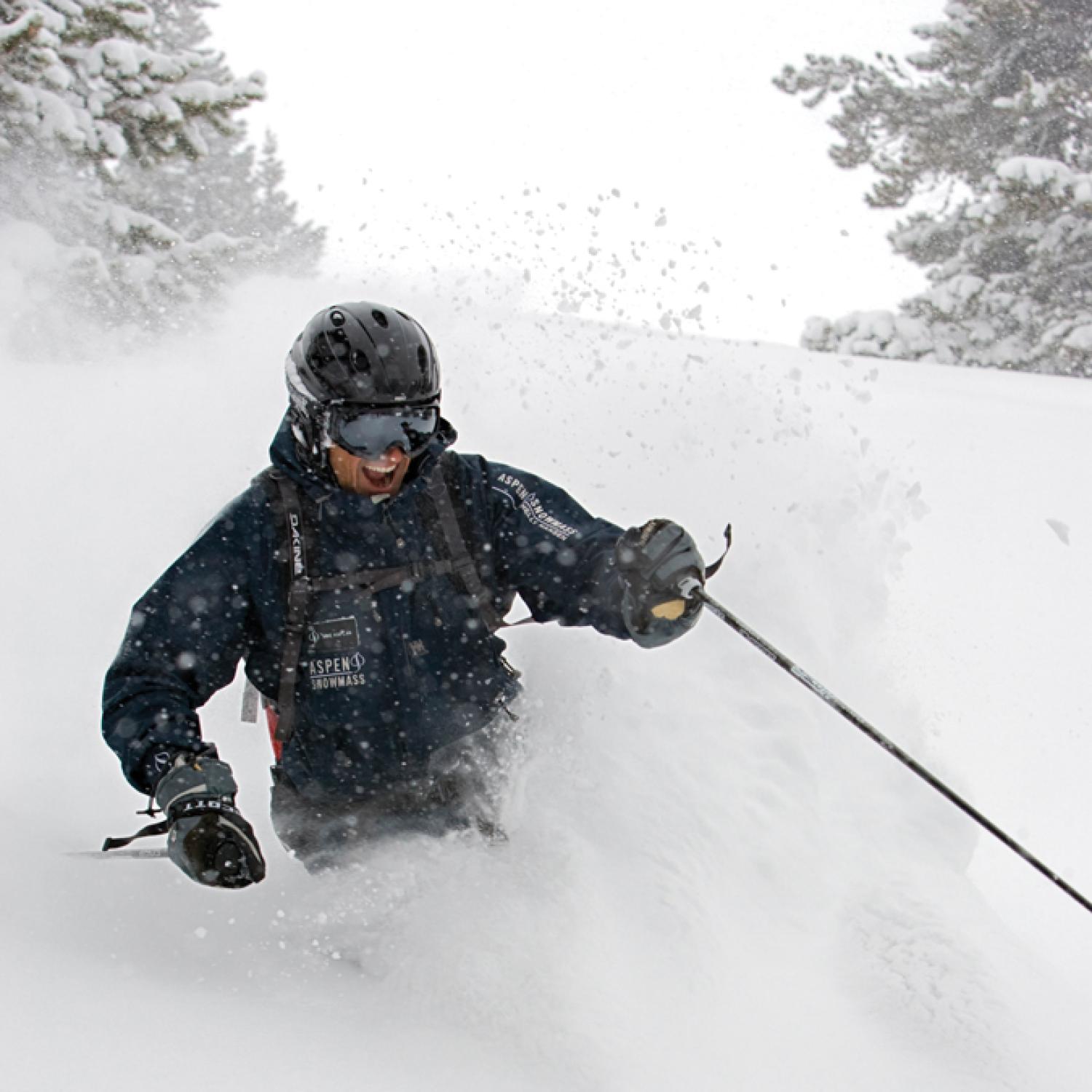 It was early ski season in the Rockies, and Mike Kaplan (IntlAf’86), CEO of the Aspen Skiing Co., had his hands full. Literally. With a ski pole in each hand, he clicked into his Blizzard Titan Atlas 185 skis and joined the “Powder Posse” at Aspen Highlands to ski the fresh stuff before opening day to make sure it was packed down.

“There was powder everywhere,” crows Kaplan, who rides his bike in the off-season to keep in shape. “This has been one of the top 10 early seasons since 1967.”

Kaplan was hoping the early powder dumps were a harbinger of a snowy winter at the sprawling resort where he has worked since 1993. Like other Colorado resorts, Aspen took a serious hit during the 2008 recession. It rebounded in 2009-10, seeing a 4 percent increase in skier days.

Kaplan attributes the turnaround, in part, to Aspen’s decision to forego widespread layoffs and drastic reductions in employee benefits and on-slope grooming.  That kept morale up without a visible decrease in service. This season Aspen hired 300 fewer seasonal workers and cut oil and natural gas consumption as part of its wide-ranging initiatives to “green” the resort.

“In the economic downturn we showed we were different,” says Kaplan, 46, who lives in Aspen with his wife, Laura, and children, Emma, 16, Eli, 15, Stella, 13, and Eva, 6. “We had to get leaner and do things in ways that were more sustainable for the longer term.”

Kaplan’s rise to the top of one of the world’s leading ski resorts caps a lifelong love of the sport that began inauspiciously in Wisconsin at a ski hill called Wilmot Mountain, which had a vertical elevation of 230 feet. He raced in high school, whipping down the giant slalom courses in as little as 16 seconds but dreaming of the mountains of New England and Colorado.

He attended Stratton Mountain School in Vermont during his last two high school years and arrived in Boulder in 1982, prepared to study and ski. He made the Buffaloes’ B-team at a time when the A-team included such racers as Matt Lyon (PE’86), Barry Woods (PE’87), Todd Hatami (EnvDes’87), Kevin Kaneda (Bus ex’88) and Bill Madsen (Comm’89).

“In college, Mike was focused and intense in a good way,” recalls Woods, vice-president of operations at Surefoot, the ski-boot fitting company, who still skis the steeps with Kaplan on annual weekend reunions with a dozen guys. “He was very realistic about his expectations — he was there as much to be a student as to be a racer. He has always been a level-headed balanced individual, and it seemed like he always knew what he wanted to do.”

Kaplan majored in international affairs, keeping up with his studies between thrice weekly practices at Eldora Mountain Resort and weekend races on the USSA circuit. The more time he spent in alpine recreation, the more he came to believe he could earn a living in the field. 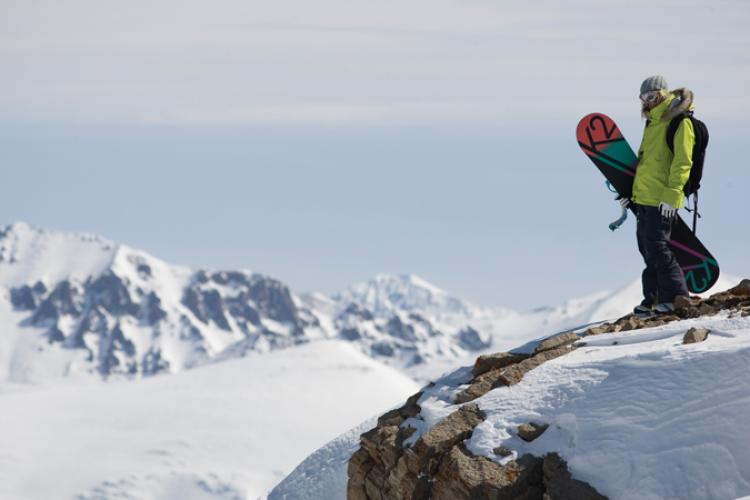 Carving turns for a living

“Boulder taught me I could have my cake and eat it, too,” he says. “Whether it’s living in the Rockies for recreation or making your living there, it’s the mountains and that connection to the physical environment as a place to think, relax and pursue your dreams.”

Like any number of CU-Boulder alumni, Kaplan headed to the mountains after graduation to live the life of a ski bum. He chose Taos Ski Valley Resort in New Mexico. But at Taos he had a purpose — to learn the ski business under the tutelage of Ernie Blake, the resort’s legendary founder. He taught ski school, ran the snow guns in the dead of night and learned how to control avalanches while working on ski patrol.

After seven years at Taos, Kaplan knew he needed more education to make his leap into the top echelons of resort management. After earning his MBA at the University of Denver in 1993, he landed a job as director of Aspen’s ski school. In 2005 he was named chief operating officer and one year later, chief executive officer.

As the 2010-11 ski season winds down, he has worked to build that Aspen brand, urging employees to take special care of the guests and continues his campaign to cut the resort’s carbon footprint. Kaplan, who has gone to Washington, D.C., to lobby for climate change legislation, says warming trends could doom the ski business with shorter winters. Aspen does 37 percent of its business in March, which is near the end of the ski season.

To be more sustainable, the skiing company builds according to U.S. Green Council regulations and is exploring the development of a wind turbine atop the Snowmass ski area.

“We see climate change as a long-term threat to our business model,” Kaplan says. “We want future generations to appreciate the mountain environment on skis and snowboards.”

He’s also preparing strategies to position the ski industry for the realities of the post-Baby Boom generations. Today ski resorts like Aspen mostly cater to well-heeled skiers in their 50s and 60s who fell in love with the sport in the 1960s and 1970s and have the disposable income to splurge on an alpine vacation.

But Kaplan is keenly aware that the industry needs to nurture a new generation of skiers and snowboarders.  Aspen’s campaign to attract younger skiers began in 2000 when snowboarders were granted permission to ride on Aspen Mountain. The following year Aspen began hosting the Winter X Games, the most-watched winter sports event on ESPN that features extreme action sports. That partnership resulted in cutting-edge terrain parks built for the annual event, some of which are available to Aspen’s paying customers.

In addition, the ski company’s four areas — Aspen Mountain, Aspen Highlands, Buttermilk and Snowmass — are among 21 Colorado resorts participating in Colorado Ski Country’s Fifth Grade Passport Program, which provides fifth-graders with three lift tickets at each of the resorts. Aspen has long been a partner in the program, which this year provides a free rental and lesson on their first day on the slopes.

“The ski industry’s main challenge is the aging population,” he says. “The Baby Boomers are aging, but for the time being they have more free time, are healthier than ever and improvements in equipment and grooming have kept them in the sport. Things are good right now. But down the road, we need to replace those Baby Boomers.”

David McKay Wilson is a New York-based freelance writer who hits the slopes of New England whenever he has a free moment during the winter.

Lauren Glendenning’s office is four blocks from one of the most famous ski resorts in America. END_OF_DOCUMENT_TOKEN_TO_BE_REPLACED 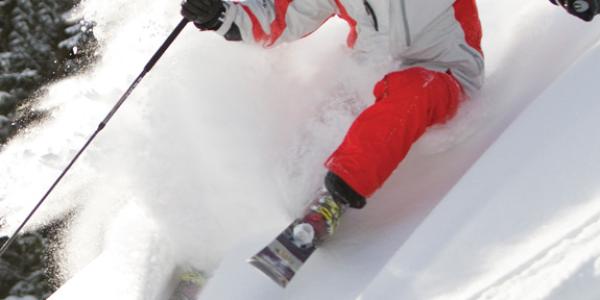 A Film Mogul in Action 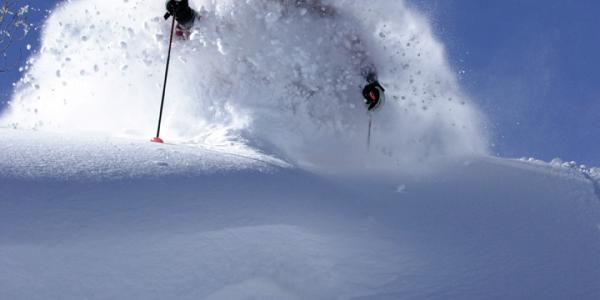 Skiing down the mountain at Steamboat Ski Area with former Olympic racer Billy Kidd is no fast feat. END_OF_DOCUMENT_TOKEN_TO_BE_REPLACED