Home Winter 2010 A Century of Macky

A Century of Macky 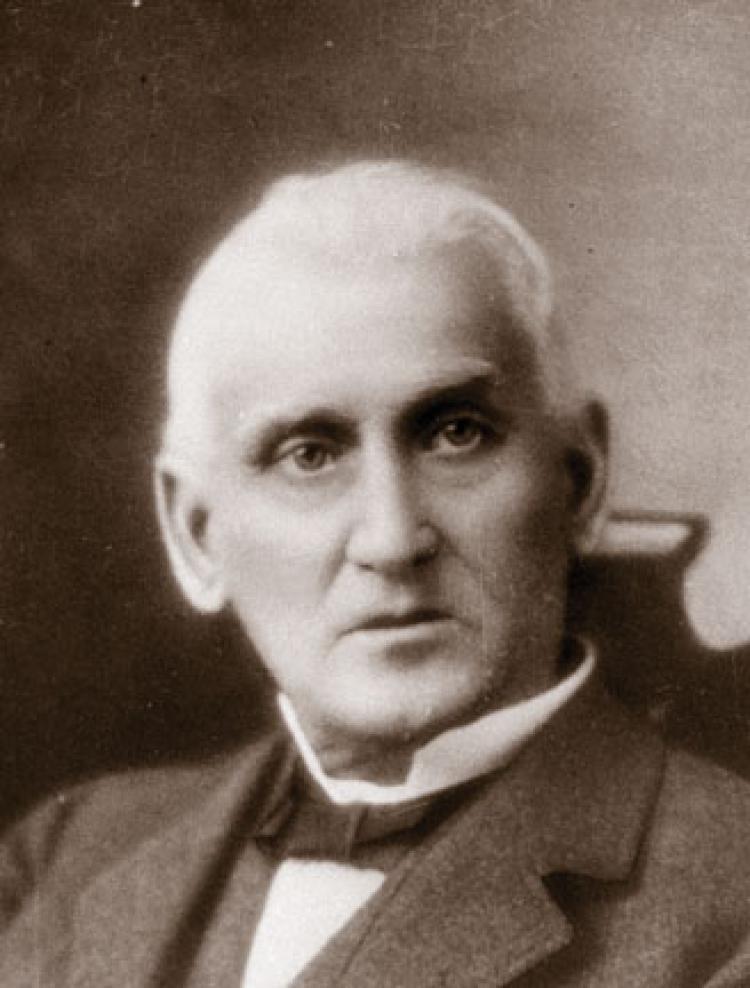 As Japanese aircraft attacked Pearl Harbor in Hawai’i on Dec. 7, 1941, CU-Boulder President Robert L. Stearns called an emergency meeting with students in Macky Auditorium. Thousands of miles away from the sounds of sirens, screams and explosions, Stearns announced to an unsettled student body there would be no change of schedule during final exams.

“Just do the best possible,” he said as he stood before the students in the grandiose auditorium, “and mutter
a prayer.”

The next day, the United States declared war on Japan resulting in its entry into World War II.

For 100 years Macky Auditorium has played a central role on campus as host to emergency campus meetings, commencements, political protests, music concerts, academic departments and beyond. Poet Robert Frost and the Dalai Lama have spoken there while singers like Neil Young have performed lively concerts.

Yet, in some ways, it’s a miracle the building exists. Andrew Macky, the man who left his fortune to construct the auditorium, never received a college education, much less attended CU. 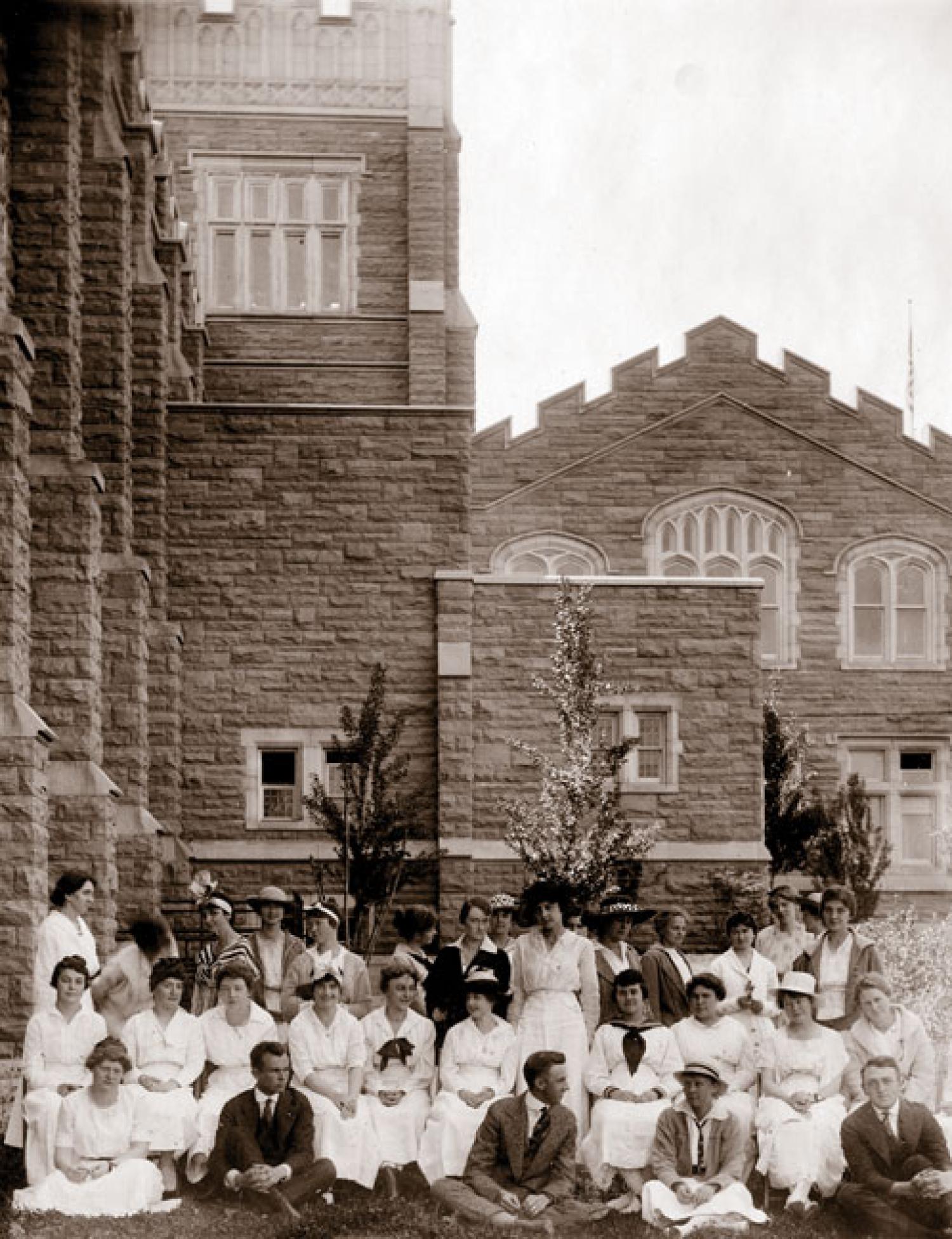 Students gather in front of Macky in 1916, five years before President James H. Baker held a building dedication ceremony. In his speech Baker emphasized how the university had grown from a smattering of chicken coops, pig pens and enclosed pastures to a series of “modern” structures that had attracted a much larger student body. Photos University of Colorado at Boulder, University Archives, University Museum Photograph Collection, Charles Snow Collection, University Images Collection

A New York native, Macky came west with a group of Wisconsin prospectors to follow the lure of gold, arriving in Boulder in 1859 when the newly founded supply town was still part of Nebraska Territory. Instead of hitting pay dirt, Macky banked on the wealth of others by organizing First National Bank and becoming its president.

After the university football team suffered a discouraging defeat by Nebraska in 1903, he commented to a Colorado senator that he would “do something for the boys.” What he did was designate $300,000 in his will for the construction of an auditorium. When he died in 1907 at the age of 73, Macky was Boulder’s richest resident and a loyal supporter of CU. To honor his bequest, grateful regents passed a resolution to annually place a wreath of flowers on his grave in Boulder’s Columbia Cemetery.

CU President James H. Baker contributed to the auditorium’s design by challenging the architectural firm of Gove and Walsh to come up with “something different,” harmonizing elements of European buildings Baker admired. Despite the university’s outward optimism and enthusiasm, getting the building off the ground proved to be an uphill battle. Macky’s adopted daughter contested his will, and intermittent litigation interrupted construction for years.

Construction formally began in fall 1909. A year later CU faculty, students, alumni and invited guests gathered north of Old Main on a windy day to hear Colorado Gov. John F. Shafroth and Baker speak at the cornerstone-laying ceremony. A newspaper reporter predicted the auditorium would be a “splendid building” and dutifully noted the assortment of items placed in the box inserted into the cavity of the cornerstone. All eyes focused on Masonic Grand Lodge members who followed their traditional ritualistic ceremony, hoisting the stone into place and consecrating it with corn, wine and oil — symbols of prosperity, health and peace.

Dean Antoinette Bigelow later noted, however, that “mostly what we did was fight the wind that blew that morning so menacingly across the lake and over the little bare hillside that one wondered whether even a building could stand there long.”

By 1912 the shell of the auditorium was complete and Baker, followed by CU President Livingston Farrand, worked from a makeshift office within the building. Wooden benches were installed in 1914 in time for that year’s commencement. Then the lawsuits resumed, and the interior remained unfinished. Even so, in 1919 John Philip Sousa and his band gave a rousing performance to an enthusiastic crowd. Finally, in 1921, the building was dedicated — complete with 2,600 seats and a $68,000 pipe organ donated by community members, largely women’s clubs.

Many people who frequented the auditorium came from the Boulder community. In 1923 they packed the house to hear Helen Keller, blind and deaf since infancy, give one of her inspirational lectures. Other well-known speakers and entertainers followed, including Boulder opera singer Josephine Antoine and poet Robert Frost whose vibrant performances set the stage for years to come.

As the student body grew and the campus evolved, Macky Auditorium was used for every purpose from freshman exams to commencement. In 1935 President George Norlin stood on the stage to deliver his baccalaureate address, now repeated every year as the “Norlin Charge to Graduates.”

When the Conference on World Affairs began in 1948, the words of one stimulating speaker after another reverberated throughout the ivy-covered building. An overflow crowd of students and citizens gathered in 1955 to hear former first lady Eleanor Roosevelt speak on world peace. Even so, the Cold War lurked in the shadows. Civil defense supplies were lowered into the basement, turning the auditorium into a huge fall-
out shelter.

Then came turbulent years for the campus and the nation. In 1969 protestors gathered when San Francisco State President S.I. Hayakawa delivered a lecture in Macky. In 1970 demonstrators bombed the building’s roof and, in 1971, gate-crashers started a near-riot at a sold-out Neil Young concert.

Calmer years followed. In 1980 the auditorium was included in the Norlin Quadrangle National Historic District. Five years later, it was renovated into a concert hall to improve the auditorium’s acoustics and ambiance.

Throughout the years, performers and speakers have included artists from the Trapp Family Singers to Yo Yo Ma. The auditorium also has featured talks by  Jane Goodall and Archbishop Desmond Tutu.

Male students who were part of the campus ROTC gather in front of Macky in this 1918 photo.

In July 2010, three months before the 100th anniversary of the laying of the cornerstone, a university facilities management crew began the process of recovering the building’s time capsule. After drilling from above and around the 5-foot-long polished block of granite, the crew — working from inside the building — discovered an opening in the bottom of the stone and located a soldered rectangular copper box tightly wedged inside.

It contained crisp Boulder and Denver newspapers; a copy of Andrew J. Macky’s will; several photographs of Macky, the regents, the auditorium under construction and a drawing of how it would look when completed, as well as a catalog for the previous year’s commencement address. On Oct. 8 the contents of the box were publicly displayed in the foyer of the auditorium before being moved to a permanent home at the CU Heritage Center.

“As the legacy of Andrew J. Macky has endured for 100 years, the auditorium is the most visited tourist destination on campus, an icon of the Boulder cultural landscape and a centerpiece of the performing arts in Colorado,” says Rudy Betancourt, Macky director. “As we move forward in the 21st century, it will continue to be a monument to the human spirit.”

Silvia Pettem (A&S’69) writes history columns for the Boulder Camera and was featured in the September 2010 Coloradan in “Sleuthing for Jane Doe.”

A tiny but growing number of Americans live to age 100 or beyond. A pair of CU centenarians (and two on the cusp) recall the 1930s. END_OF_DOCUMENT_TOKEN_TO_BE_REPLACED

Academic subjects evolve. Some disappear entirely. What decides the fate of a college major? END_OF_DOCUMENT_TOKEN_TO_BE_REPLACED 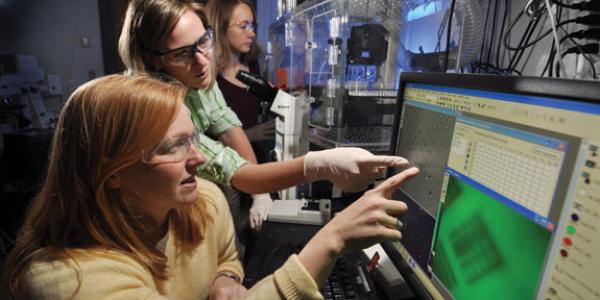 Healing Gets a Leg Up