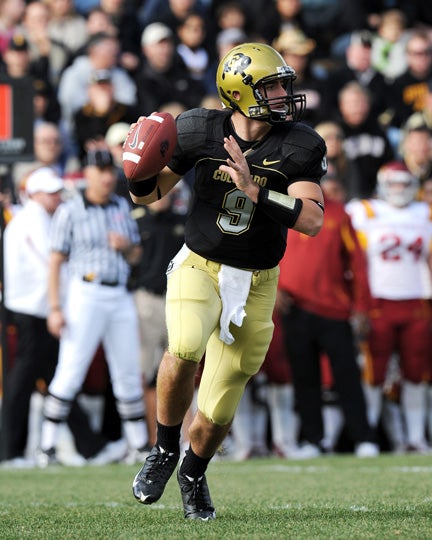 Tyler Hanson, above, replaced Cody Hawkins as the top QB during the Buffs’ first conference game, a loss at Texas.

The football team struggled during the nonconference portion of its schedule, posting a 1-3 record before starting Big 12 action. It was only the third time in the last 23 seasons that the Buffs have recorded a losing mark after their first four games (along with 2000 and 2006).

Because Coach Dan Hawkins said after last season he expected the Buffs to win 10 games in 2009, CU caught some flak for losing to Colorado State, Toledo and West Virginia, while blanking Wyoming 24-0 in week three. But the Buffs rallied in a 34-30 win against Kansas.

“It’s easy to stand outside the arena and say you’re not good enough and be negative,” Hawkins said after the Wyoming win. “But when you’re in the arena and you’re scrapping, it’s little things that decide the game.”

One source of support was former coach Bill McCartney, who led CU to a co-national championship in the 1990 season.

“I still believe (Hawkins) has laid the right foundation,” McCartney told the Denver Post. “And with a foundation of sound character, hard work and principles, it’s just a matter of time.”

Cody Hawkins initially won the starting quarterback job, which was made public when CU took the field against CSU. But sophomore Tyler Hansen replaced Hawkins as the top QB during the Buffs’ first conference game, a 39-17 loss at Texas

Meanwhile, just before the season opener, CU and CSU announced they will play in Denver at Invesco Field each year from 2010 to 2019.