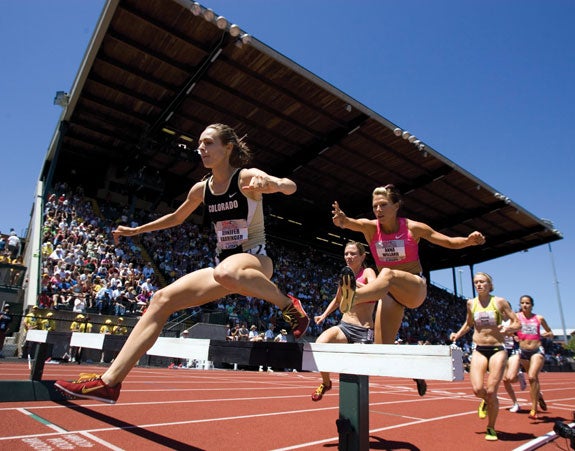 Jenny Barringer, a senior, is the first CU female in any sport to win four NCAA titles.

Senior Jenny Barringer concluded her CU track and field career in style in June, winning her third NCAA outdoor 3,000-meter steeplechase title, this one in Fayetteville, Ark. Barringer posted a time of 9:25.54, a college record, in winning by more than 15 seconds.

“This was an exciting win,” she says. “I’m happy to have it behind me. It’s tough to come in and be a heavy favorite. I just had to keep my mind right and go out there and take care of business. It felt great.”

Barringer, a 2008 Olympian, didn’t lose a single college race during the indoor and outdoor season and became the first CU track athlete to capture three titles in the same event. Overall, Barringer owns four NCAA track championships, including an indoor 3,000-meter title in March, making her the first CU female in any sport to win four NCAA titles.

Barringer’s 2009 season included being named the U.S. Track & Field and Cross Country Coaches Association Female Track Athlete of the Year (indoor and outdoor), winning the Honda Sports Award for being the top college female track and field athlete in the nation and being one of five finalists for the Honda-Broderick Cup, given to the country’s top female college athlete.

She plans to compete for CU in cross country in the fall before graduating in December.