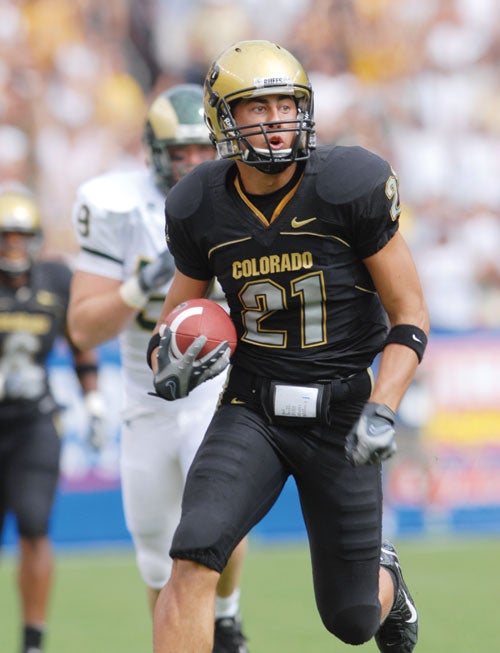 Coach Dan Hawkins is looking forward to a successful season this year. Above wide receiver Scotty McKnight runs with the ball.

The CU football team won just two of eight games against Big 12 opponents last season, but coach Dan Hawkins believes his Buffs have a chance to make a big jump in the conference standings in 2009.

Asked during a summer function if CU can make a run at the Big 12 title, Hawkins said, “Do we have the potential to do that? Yes, we do. But you’ve got to get hot, you’ve got to get some confidence going, you’ve got to avoid injuries. And then you never know how those things will go. But I think we’re definitely getting closer to knocking on the door.”

Hawkins announced in June that two athletes who played key roles last season won’t be back in 2009.

Wide receiver/kick returner Josh Smith, who accounted for 1,987 all-purpose yards last season, was given a release from his CU scholarship to transfer to another school.

Guard Devin Head, who has made 17 starts in his CU career, also won’t play as he’s academically ineligible.

Meanwhile, Hawkins decided to add coaching wide receivers to his duties, becoming the first CU head coach to also coach a position since Bill McCartney in 1993. Read the Q&A with Hawkins on pages 50-51 and his essay.