In the early ’60s she did stints as a ballerina, a nurse and a flight attendant. By 1988 she had completed medical school and become a doctor. Twenty years later she ran for president.

For 2018, Mattel is taking on tech with Robotics Engineer Barbie, released in conjunction with the e-book Code Camp for Barbie and Friends.

“Learning to code is just like learning to speak a new language, and it’s something that you can start doing right now!” Casey Fiesler, an assistant professor in CMCI’s Department of Information Science, writes to young readers in the introduction. 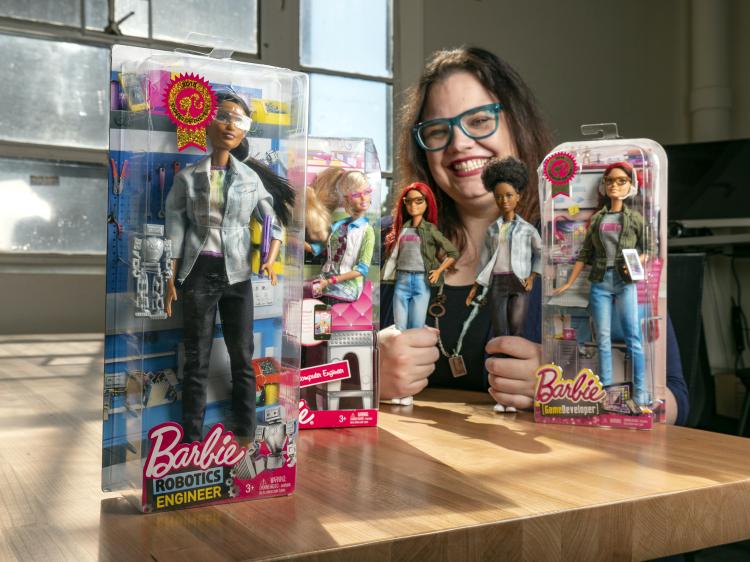 Before consulting with Mattel on the e-book, Fiesler wrote about Barbie’s previous ventures into the world of STEM—science, technology, engineering and mathematics—in two articles for Slate. The way Barbie represents STEM careers, to young girls especially, is something Fiesler wants to see Mattel get right.

“It seems like such a simple thing, but part of getting people to see themselves doing something is representation,” she says.

Fiesler began writing about Mattel in 2014, after seeing screenshots of a book called Barbie: I Can Be a Computer Engineer. In the book, Barbie focuses on game design—leaving the actual engineering to two males—and eventually gives her computer a virus. Fiesler created a remixed version in which Barbie actually acted like a competent computer engineer.

The following year, when Mattel released Game Developer Barbie, Fiesler was encouraged to see a Barbie that could actually code. Her only disappointment, she wrote in a second article, was that the company didn’t take the opportunity to partner with computing education companies.

The new e-book, created in partnership with the children’s educational programming platform Tynker, fills that gap and avoids errors Mattel made with Barbie: I Can Be a Computer Engineer.

“Mattel really screwed it up,” Fiesler says. “But they took steps to make it better, and I would like to think that my critique, or critiques like mine, helped push it in that direction.”

In her introduction, she writes what Barbie should have been telling young girls all along: “Anyone can learn to code.” 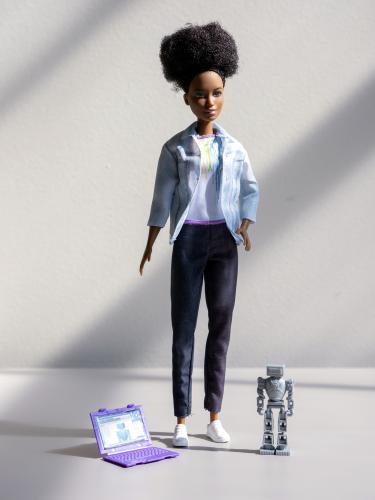 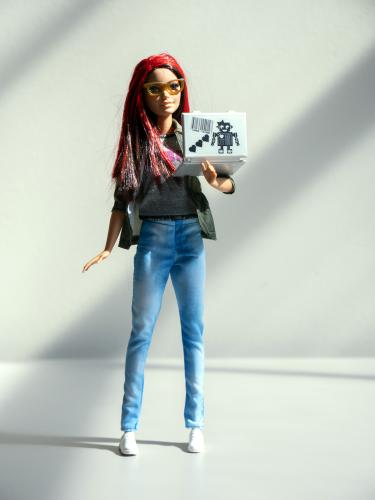 What began as a single piece of art a decade ago has spread across the globe in iterations ranging from “hope” to “nope.”

Shepard Fairey’s Obama Hope poster—based on a photo by Mannie Garcia—first appeared on bumper stickers and Facebook feeds in 2008 while Laurie Gries was a graduate student.

“Its rhetorical life had just begun,” says Gries, an assistant professor in the Department of Communication and the Program of Writing and Rhetoric. “I just thought I’d track it through the election and in that isolated context. I had no idea it would spread so broadly.”

The poster went viral, with people around the world creating and sharing new versions called Obamicons. Gries developed a digital research method for tracing the circulation of such widespread images—iconographic tracking—which she introduced in her book Still Life with Rhetoric: A New Materialist Approach for Visual Rhetorics. 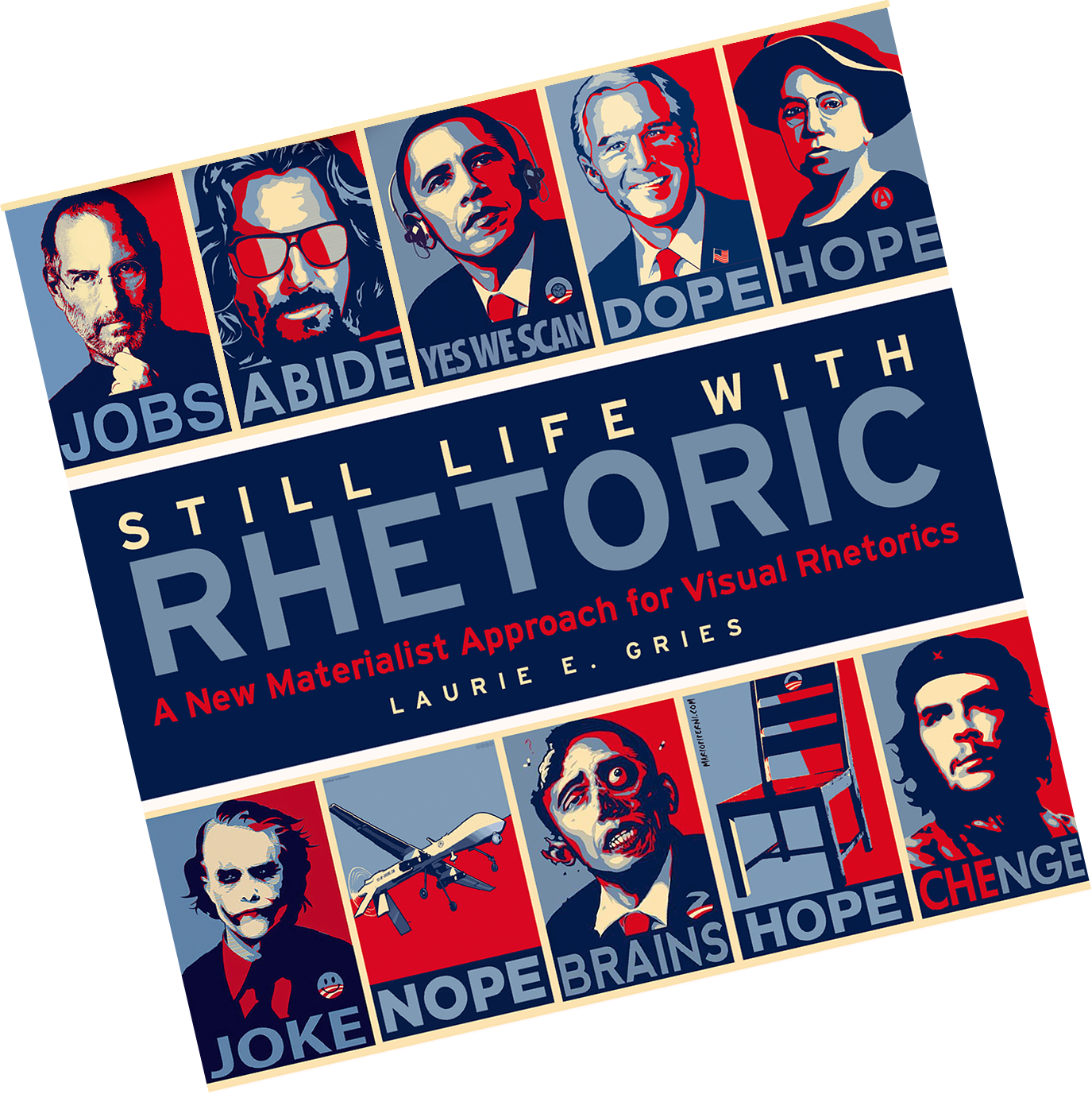 “You know how you can write a biography of someone’s life?” she says. “Basically, what I did was write a rhetorical biography of the Obama Hope image’s life.”

“What I’ve been doing as of late is looking at how Trumpicons have been used to amplify Trump’s messages and, at the same time, resist them,” she says.

“This image would not have been able to live the life it did without, first, Mannie Garcia, and then, Shepard Fairey,” she says. “But once it was released, it took on a life of its own that had little to do with Fairey’s original intent.” 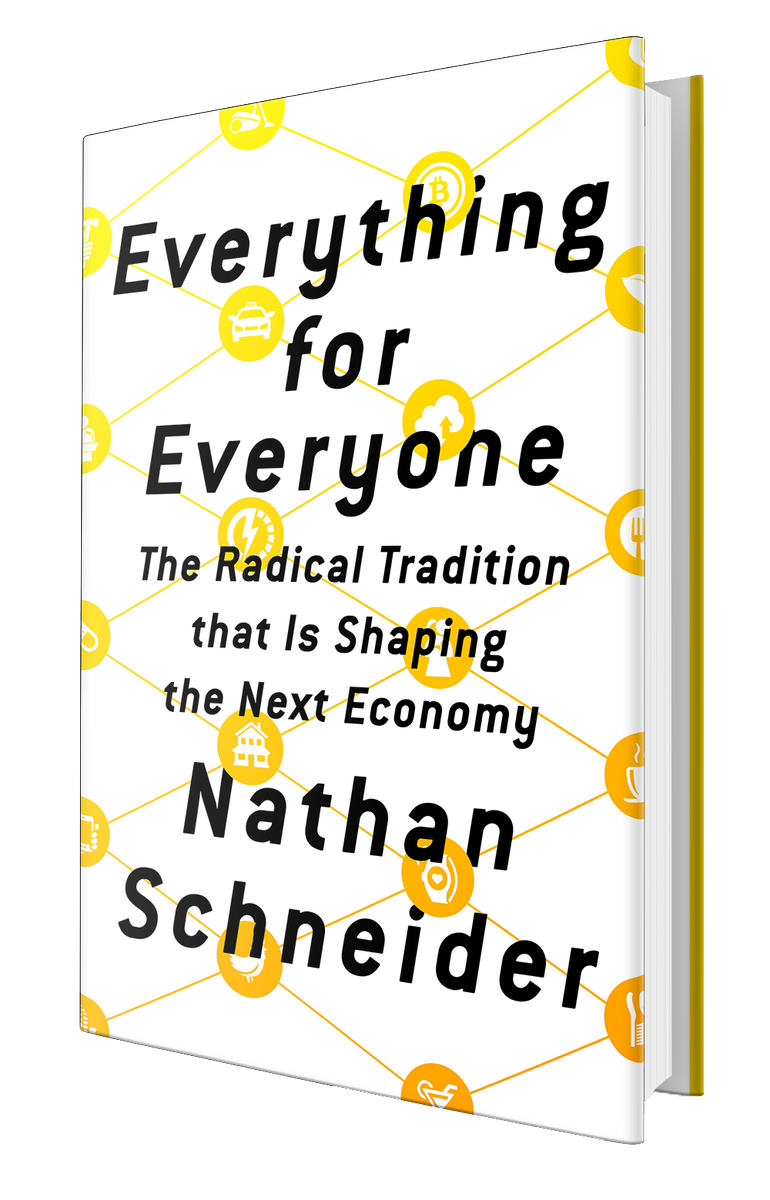 Nathan is on tour to promote his new book.

Believe it or not, one professor says it exists: the cooperative movement. 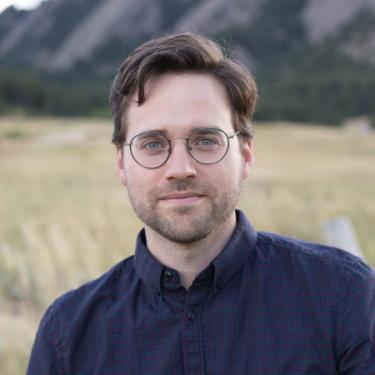 “It has been supported equally by Democrats and Republicans for decades,” says Nathan Schneider, an assistant professor of media studies. “For instance, expanding employee ownership was on both the Democratic and Republican platforms in 2016. And both parties recently supported a new law to lighten the regulatory burden on credit unions, which are cooperative banks.”

In his new book, Everything for Everyone: The Radical Tradition That Is Shaping the Next Economy, Schneider explores the history and future of the movement for increased public, user and employee ownership.

Activists in the movement are interested in how co-ops can revolutionize America’s economic future—impacting ownership models for everything from newspapers to social media to the internet.

Schneider’s family history in part sparked his interest in the topic. His grandfather was president of a nationwide cooperative hardware store, and some members of his family first came to Colorado thanks to a co-op beet company that still operates today.

In a previous book—Thank You, Anarchy—he followed Occupy Wall Street activists seeking greater financial equality. After the protests, they embraced the co-op model.

“They turned to this tradition as something that could hold their values while also enabling them to work within the market,” he says. “But it’s also the tradition of my conservative grandpa.”