Keeping an eye on the hurricane

Home/Fall 2018/Keeping an eye on the hurricane

As Hurricane Harvey bore down on Houston in August 2017, the Twitterverse lit up with satellite images warning of danger and 140-character exchanges between worried residents. For those in the midst of it, the tweets provided information, comfort and sometimes confusion.

“I am interested in the nature of human cooperation and coordination. How does it happen? How does it fail? And what can we do to make it better?” says Palen, founding chair of the CMCI Department of Information Science and a pioneer of the burgeoning field of crisis informatics. “There is no more extreme environment to study this in than a natural disaster, and social media makes it possible on a mass scale.”

Since 2006, when Palen was awarded a $600,000 National Science Foundation CAREER Grant, which helped her launch the field, she’s drawn $6 million to study how digital technology shapes disaster response.

She and her students have been embedded among emergency personnel during the 2013 Colorado floods, collected tweets in real time during the 2015 Nepal earthquake, and evaluated how digital maps helped and hindered aid workers after the 2010 Haiti temblor.

Now, they’re scouring through tweets from the 2017 hurricane season for a project designed to make forecast images easier to understand for those in harm’s way.

“Crisis informatics enables us to use technological skills to solve real-world problems,” says Melissa Bica, a PhD candidate who was drawn to CU Boulder by Palen’s research.

In 2005, when Hurricane Katrina hit, Twitter didn’t exist, and texting and camera phones were less common.

Today, digital technology enables ordinary citizens to provide a voice once largely reserved for government officials or media in describing the scene, soliciting aid and drawing sympathetic gazes from afar. 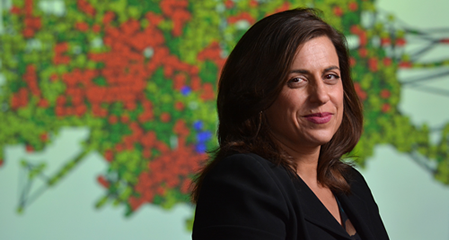 "I am interested in the nature of human cooperation and coordination. How does it happen? How does it fail? And what can we do to make it better?

“It is important that we understand that social media is used for all sorts of purposes, because people don’t necessarily tweet with the intention of helping aid organizations,” Palen says. “Often, they are simply talking to their friends, unaware they are being observed for other purposes.”

There’s also the potential for posts from official sources to be misinterpreted by people in harm’s way.

For the hurricane study, a collaboration with the National Center for Atmospheric Research (NCAR), Palen and her students collected 10 million tweets from Harvey, Irma, Maria and Nate. They zeroed in on those containing risk forecast images, such as satellite imagery and graphics showing the “cone of uncertainty” where the storm might hit next.

“We are finding that often people don’t understand what they see,” says James Dykes, a PhD student in information science.

In addition to questions about the elements of the graphics and science of the hurricane, tweets show confusion about what to do in response to a forecast, or expressions of fear and concern.

In response to a weather graphic put out by an Orlando news station, an account called @inthelance tweeted, “And here I am with my roof being redone, just tar paper on it; and weeks from closing. FML.” Another account, @hopscotch59, tweeted, "Is that with a turn to the right back north? What exactly are we looking at here?"

Eventually, such feedback can help forecasting agencies improve their images. By doing this research in collaboration with NCAR, the results will be communicated directly to the large “weather community” of practitioners who are distributed across agencies around the nation and the world, Palen says.

With six of her PhD graduates engaging in crisis informatics research around the country, and emergency response officials using that research to inform their work, the field Palen founded makes critical contributions to emergency management.

As she puts it: “Being part of a small, innovative department at a research university can lead to pretty amazing things.” 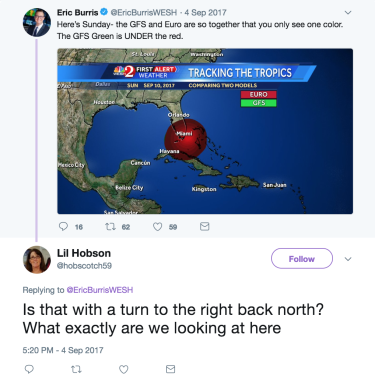 Tweets often reflect that people are confused by the forecast images they see on social media. 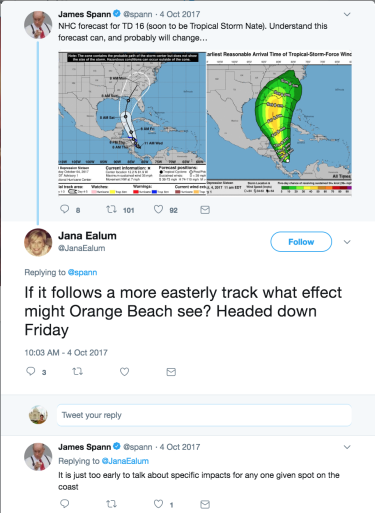 Twitter users often want more detail on what the images mean for them personally.