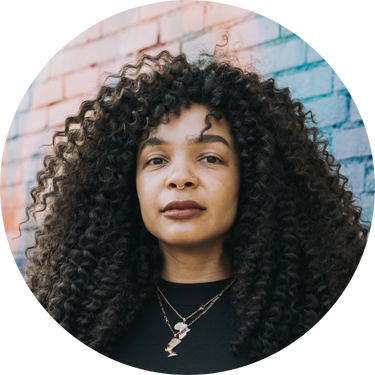 “Danielle’s been trained in a way that literally makes her a bridge from African American studies to communication studies. You see curricular contributions that she’s making that perhaps nobody else at the college or even on this campus is able to make.

In the wake of the murders of Ahmaud Arbery, George Floyd and Breonna Taylor in 2020, Danielle Hodge (PhDComm'20) sat on her sofa watching as organizations and individuals issued statements of solidarity online. She reflected on the classes she was scheduled to teach—and a course that did not yet exist.

“When I have an idea, more than likely I’ll be contacting Reiland Rabaka because he’s a mentor and a friend of mine,” said Hodge, an assistant professor of communication who, at the time, had just finished her doctorate at CU Boulder. “I remember talking to him about it and thinking, ‘If people are serious, we should have a course on this.’”

That fall, Hodge brought her course, Race, Anti-Black Racism and Communication, into reality in the College of Media, Communication and Information.

Since the initial offering, about 20-25 students have gathered in a classroom each semester to look closely at racism and oppression against Black communities. They discuss white supremacy, how racism manifests in everyday communication and what it means to love Blackness as political resistance. The course is unlike any offered on campus, providing students with a unique bridge between disciplines and a life-changing opportunity.

“Danielle’s been trained in a way that literally makes her a bridge from African American studies to communication studies,” said Rabaka, an ethnic studies professor and founding director of the Center for African and African American Studies. “You see curricular contributions that she’s making that perhaps nobody else at the college or even on this campus is able to make.”

The lecture and discussion-based class pulls in literature, media, scholarship and other work to build a foundation for understanding anti-Black racism. Students read the work of thinkers, writers and creators like W.E.B. Du Bois, Derrick Bell, Kimberlé Crenshaw, Michelle Alexander and Ava DuVernay.

They look at how anti-Black racism has existed through centuries, and they examine how this racism manifests and has adapted today. Hodge begins and ends the course with a discussion on loving Blackness as political resistance, building on the work of bell hooks and Imani Perry. The lesson is a favorite for students, Hodge said.

“It’s an unapologetic love for Blackness, and I think that resonates with them, especially when there’s not a lot of demonstrations of that. In this society, it’s not as accessible. We don’t see it a lot,” she said.

Although people have not questioned the course itself, some have pushed back against its focus on anti-Black racism, Hodge said. To them, the focus is exclusive, leaving out other discussions of racism and oppression.

When Hodge hears those concerns, she recalls a statement made in the 1970s by the Combahee River Collective, a group of Black feminists.

“If Black women were free, it would mean that everyone else would have to be free, since our freedom would necessitate the destruction of all systems of oppression,” Hodge quoted from the statement. “Our focus on anti-Black racism doesn’t preclude any other discussions of oppression. What they’re saying is: If you understood that your oppression and your liberation were bound up with ours, the revolutionary impact would be great.”

On a campus of about 36,000 students, only 949 of whom are Black, these discussions are even more important, Rabaka said.

“We’re sharing this message, this mission, of African American liberation, of freedom, of our struggles during enslavement and what it means to rise up from bondage. We’re sharing that with a wider audience,” he said. “And we’re doing it in ways, I hope, that we’re giving our students tools so they can rescue and reclaim their humanity.”

For students in Hodge’s class, the impact has been “monumental.”

“[Hodge] is one of the most impactful professors I’ve ever had, and also one of the more impactful people I’ve met and had the privilege to experience in my life,” said Isabel Schreiber, who graduated in May with a bachelor’s degree in psychology.

She recalled a quote from Ta-Nehisi Coates: “Race is the child of racism, not the father.” The simple phrase encapsulated complex, systematic issues and reminded her of how intertwined racism is with institutional and social structures in the United States.

As a pre-med student, the course helped her clearly see how anti-Black racism trickles into medicine and medical research. Most research is done on heterosexual, white, socioeconomically advantaged people, she said.

“When we only do our research or try to create cures based on one class of people, we end up actually harming a lot of other people because we’re not able to accurately diagnose and treat people,” Schreiber said.

Both Schreiber and Kendall Waddle, another recent graduate, said Hodge taught the class with an openness and honesty that invited students to examine their own beliefs and misconceptions.

“Dr. Hodge’s seminar was essentially monumental in changing my worldview and my awareness, not only within the classroom and within my academic career, but as a person for the rest of my life,” said Waddle, who graduated in May with degrees in communication and philosophy.

The class built her awareness of her own identities as a white, middle-class woman, she said. Through it, she saw more clearly how social structures and institutions made things easier for her while marginalizing others. She learned about stereotypes experienced by Black individuals. Months after finishing the class, she is careful to think critically about where she gets her information, making sure to engage with work from Black communities.

It’s a way of challenging the status quo, she said.

“There was no negativity. She just teaches with so much energy, light, love and passion for her students and for her work within anti-Black racism,” Waddle said. “I feel like this relentless drive and compassion she had—to really hear her students and be heard by them—is really what made the class so profound and impactful. . . . She’s awesome.”

For Hodge, seeing her students continue the work after they leave her classroom demonstrates what it means to love Blackness. It’s a lifelong commitment, a lifestyle, she said.

In the future, she hopes her class paves the way for others like it—courses in which students can engage with issues, struggles and lives that have been pushed into the margins. When people actually show they care, you can make waves, she said.