The Animated Life of Julia Merten

Following her creative instincts, the CMCI senior will graduate as the college’s Outstanding Graduate.

Julia Merten, known by friends as Juju, lives and works by the motto, “Express your unapologetic self.”

With a major in Media Production and a minor in Technology, Arts and Media, she describes her animation and design work as peaceful chaos. As a self-described emotional person, in tune with her past and current feelings and mental well-being, she tries to convey universal human emotion in her playful scrapbook type aesthetic.

Growing up with two parents who are Denver-based freelance graphic designers, Merten knew the difficulties of entering a creative field––something her siblings avoided when choosing their STEM-based college majors.

She, on the other hand, couldn’t stay away.

“My parents totally set themselves up for this one,” she wrote on her website housing her portfolio of artwork.

Now a senior in her final semester, Merten’s instincts are paying off. This May, she’s being recognized as CMCI’s William W. White Outstanding Graduate––an award given to the student with the highest GPA in the college.

“Whether it’s collage or video, I like to mix and match things that are not singular and that don’t necessarily make sense in your head, but when you look at it, you’re like, ‘something about this just works,’” she said 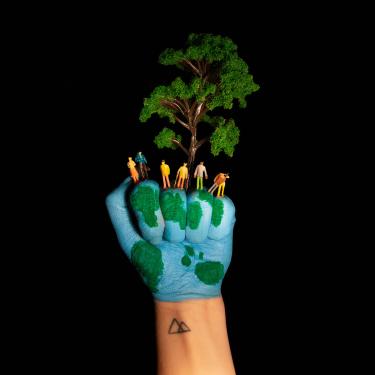 In her classes, she’s tended to push the boundaries of each task or assignment, starting with a landscape photography project assigned early on.

“Landscape photography, while I respect it, just didn’t feel like my style. I wasn’t just going to be another kid who turned in a picture of the flatirons, we see that all the time,” she said. “Being unique was really important to me. I thought it would be cool to create my own landscape.”

Handscapes, a one-of-a-kind photography project created by Merten, features miniature mystic landscapes in the palm of a hand. Merten’s classmates encouraged her idea and the handscapes portfolio now lives on Instagram, along with some being sold and featured in galleries.

“It feels really good because a lot of the time I was insecure about trying hard, which sounds silly,” Merten said. “Sometimes it can be uncomfortable to present your work when a lot of time went into it. To have people encourage me was definitely the beginning of finding my style.”

As she learned to trust herself and her creative ability, she eventually found the confidence to create an earring business––a tangible, wearable version of her digital art.

In addition to her creative endeavors, Merten stayed busy throughout her time in college––at one point holding down four jobs at once. One of those jobs, working as a content creator for Buckingham Hall, helped her develop relationships with faculty and staff mentors early on. Merten attributes much of her academic and creative success to the connections she’s made at CU and CMCI over the last four years––still meeting with some of her first-year professors for coffee years later.

“It’s just really cool because you know these are long lasting relationships that will extend beyond your four years,” she said.

Graduating and entering the workforce has been an especially difficult feat for college-aged creatives in the past year––both due to the pandemic and the social unrest the country has faced. For Merten, though, the experience helped her develop a new-found sense of independence and maturity, she says.

“I feel like I’m graduating at a really monumental time. In the past year we have experienced fights for racial equality, storming the capitol and a mass shooting in our hometown and a pandemic. It was a lot to process all at once as a young person,” she said.

As she rounds the corner to commencement, Merten has already accepted a full-time position with a Detroit-based chocolate company, Bon Bon Bon. She began working remotely in Boulder this year and will head to the midwest in the summer. Working at the company allows her to put her Media Production skills to good use while creatively expressing her style.

“I’m doing graphic design and photography. I’m helping with socials. I’m doing art direction. I get to help decorate the stores,” she said. “They are really letting me flex my creative muscles and it feels really good to be appreciated and encouraged creatively at such a young age.”

Merten’s final capstone project is dedicated to her younger self, she said. For the project, she turned a vintage suitcase into a survival kit for her younger self, full of Dot's candy, lavender scent, a mixtape and a heartbreak novel. Her message? “Trust where you’re at.”  Ultimately, this trust and confidence in herself is what has made her academic journey successful, she said.

“It felt in a way effortless, not because I didn’t work hard, but because I wanted this all along,” Merten said. “Everything that I did was something I wanted to do and that’s why it felt effortless.”

Issue: Spring 2021
Categories:
Return to the top of the page