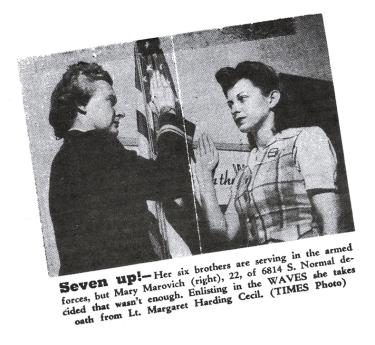 A Chicago Times article features Ryan’s mother, Mary Marovich, being sworn in as a WAVE.

The war raged on in Europe. And President Franklin Roosevelt had recently taken an unprecedented step, creating a new, all-female division of the U.S. Navy to free up men for sea duty. Their recruitment slogan: Free a man to ﬁght.

A hundred thousand women would answer the call. They enlisted in the Navy as WAVES: Women Accepted for Volunteer Emergency Services.

They’d travel far from home by train for a grueling six-week boot camp at one of several universities, including CU Boulder, agreeing to serve in the military for the duration of the war plus six months. Once on the job, they trained ﬁghter pilots and gunners, ﬁxed planes, decoded top-secret messages, served as meteorologists, and did just about any job that didn’t involve going to battle.

“Because they weren’t in combat, their stories aren’t often told,” says Kathleen M. Ryan, a documentary ﬁlmmaker and associate professor of journalism. “But these women mattered, too. Their experiences show that wartime heroics weren’t limited to the battleﬁeld.”

As the 75th anniversary of the end of World War II approaches and airwaves begin to ﬁll with stories of distant battles won and the brave men who fought them, Ryan’s lens is focused on the veteran women who helped make those victories possible. 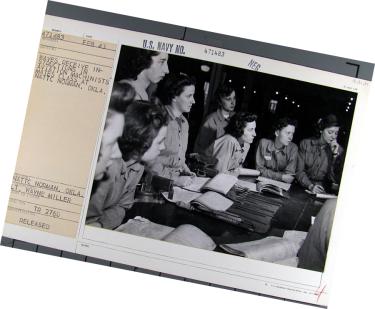 Ryan started collecting oral histories of WAVES more than a decade ago, as part of her PhD dissertation at the University of Oregon.

Her mother, Mary Marovich, had been working at the phone company in South Chicago when, at age 22, she opted to follow in the footsteps of her six brothers and enlist. Marovich served for more than two years, rising to the role of pharmacist’s mate third class, where she was paid $96 a month—the same as a Navy man.

“My mom never talked about it at all,” recalls Ryan, who learned much of her mother’s service history by rustling through old papers and photographs after she had died. “But she was proud of it, and she was insistent that when she died she be given a military headstone.”

Ryan has gathered 51 audio and video oral histories, documenting the stories of the ﬁrst women to be admitted to the U.S. military, notably, at the same rank and pay scale as men.

In 2012, she produced a full-length documentary, Homefront Heroines: The Waves of World War II.

Now, with support from a National Endowment for the Humanities grant, she’s working on an interactive website that will include video artifacts, more expert interviews and full transcripts—all in time for the 2020 commemorations of the war’s end.

“I want people to know that the experiences of these women were important, not only to them and their families, but to society as a whole,” Ryan says. “They laid the groundwork for change.” 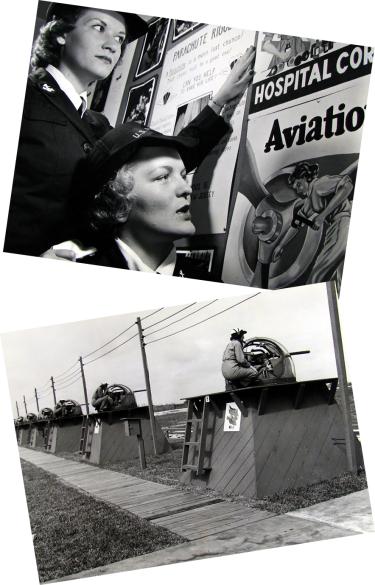 Bottom: WAVES give instruction on operating .50-caliber machine guns at the Naval Air Gunners School in Hollywood, Florida, in 1944.

Through her interviews, Ryan has uncovered a host of colorful histories of proud women, many of whom joined the WAVES to break free of the era’s limited employment options.

“I was supposed to go into the convent. The nuns were really zeroed in on me. But I didn’t want to,” WAVES veteran Josette Wingo recalls in Ryan’s documentary.

Veteran Eileen Horner Blakeley adds that, traditionally, a woman’s job “was to be a nurse, a housekeeper or a teacher. We didn’t know it, but we were really breaking ground for generations to come.”

It soon became clear that they were capable of more than they’d been given credit for.

“The rumor in the Navy was that the best pilots were the ones who had been trained by women,” Ryan says. “They knew how to teach and they were very exacting and precise.”

Military contributions aside, the WAVES also set a precedent for working women calling for equal pay for equal work.

“They would say, ‘If the military—one of the most conservative organizations in the country—can do this, why can’t everyone else?’” Ryan says.

With access to the GI bill, many pursued advanced degrees. Some took faculty positions at universities. And many encouraged their daughters to break through the stereotypical gender roles of the day.

“It gave women this idea that you can do whatever you want,” says Ryan, whose own mother encouraged her and her sister to get a good education.

After Japan surrendered and the war drew to a close on VJ Day—August 15, 1945—Secretary of the Navy James Forrestal sent a letter to each WAVE, thanking them for their service.

One woman, interviewed for the documentary, read it aloud, her eyes welling up.

“You deserve to be proud for as long as you live. The nation which you served at a time of crisis will remember you with gratitude.”