Moving images of a forest against blue sky wrap around a 6-foot-diameter sphere at the National Oceanic and Atmospheric Administration in Boulder. In a slow progression, factories appear in the sea of trees, the sky darkens, and the upbeat music becomes increasingly somber as evidence of human encroachment takes over the visuals.

“There’s something special about moving around a 3-D space, or seeing it move around you, that makes it seem more real,” says Will Brewer, a critical media practices student who created the display for his Immersive Storytelling class.

Brewer hopes that the unique storytelling platform will reach people who wouldn’t otherwise pay attention to environmental issues or take action. “This class has shown me the possibilities of storytelling using multiple senses.”

Pat Clark, an instructor in the departments of Critical Media Practices and Journalism, works with students on how to communicate using new visual perspectives and platforms for immersive environments, such as the dome at Fiske Planetarium and NOAA’s Science on a Sphere program. “This project challenges students to think differently about the relationship between content and visual presentation.”

Students in the 15-person class created storyboards, built the visualizations on flat screens using the digital program Adobe After Effects, and then tested them at NOAA’s SOS facility—a room-sized, global display system that uses computers and video projectors to display data and images in 3-D.

“It’s a different way of showing it; instead of just reading words on a paper and going by the numbers, it’s more of a feeling than anything else,” Brewer says. “If people can see something, and feel something, and hear it, then perhaps it will resonate with them more and provoke an action.”

Sophomore Will Brewer created a visualization for NOAA’s global display system by sketching ideas on a storyboard.

He then built each progression using After Effects. 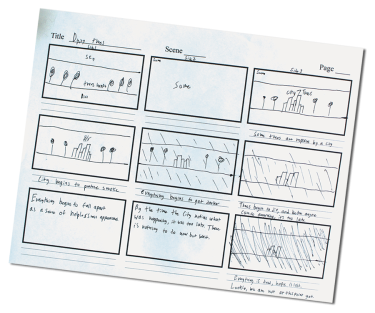 Issue: Spring 2019
Categories:
Return to the top of the page