Despite things being what they are, IAWP has still managed to continue to grow and produce over the past semester. Below are some highlights of IAWP doings and happenings throughout fall 2020. 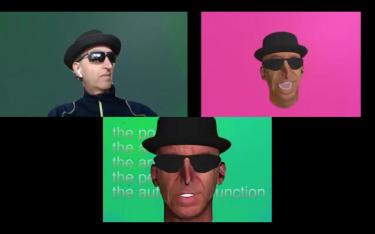 Professor Mark Amerika was invited to deliver a keynote performance at the Artificial Creativity conference in Malmö, Sweden, on Nov. 19, 2020. During the performance, he premiered new iterations of the FATAL ERROR: artificial creative intelligence art project, originally slated for exhibition and presentation earlier this year at CHI 2020 (Honolulu) and WeRobot 2020 (Ottawa). He also performed another new work of his, Planet Corona, at the Confinement, viralité et formes de vie (Lockdown, Virality and Life Forms) conference in Paris on Nov. 27. All of these projects grow out of the collaborative, practice-based research investigations taking place inside the TECHNE Lab.

Following a very productive 2020 for the TECHNE Lab, the TECHNE crew (Amerika, Kim, Gallagher) are coming out of the 2021 box with their next IDMO (Imaginary Digital Media Object) in the just-released special issue of Media-N: Journal of the New Media Caucus, focused on "Forking Paths in New Media Art Practices: Investigating Remix."

PhD candidate Sasha De Koninck submitted a course proposal for a class called The Body in Space to the Space Minor program, which was accepted and will be taught by her in the fall of 2021. De Koninck also completed her first-year review this past fall and is now preparing for her upcoming April residency in the B2 space by spending her Beverly Seares Graduate Student Grant on fabrics. In addition, she did a performance during the ATLAS Research Showcase where she wore a garment made of a textile she wove with dissolving threads.

IAWP Director and Associate Professor Lori Emerson received a $25,000 donation from Google to support the Media Archaeology Lab. The MAL also initiated its micro-grants for work in the lab that relates to the intersection of race and technology. Emerson also developed a new undergraduate course she’s proposing to the College of Arts and Sciences called Future Histories of the Internet. In December, she published, “‘Did We Dream Enough?’ THE THING BBS as Social Sculpture,”as part of Rhizome’s / The New Museum’s ongoing work to restore The Thing BBS. She also participated in the presentation of libi striegl’s short video, Frequency, which we aired for an event called Protected: Performing Media Archaeological Experiments that took place at the University of Luxembourg. Finally, Emerson gave a keynote presentation titled “Community x (Pedagogy + Play) at the Media Archaeology Lab'' for the MetaCulture Media Festival in Moscow, Russia.

PhD candidate Angie Eng was featured in the Daily Camera for her outdoor exhibit, Right on!, at Museum of Boulder. Her work responds to social crisis and systemic racism with 32 plaques. Eng is also running a Creative Catalyzer fundraiser called Dare to Care food drive for public school students––in which local artists decorate food collection crates––in collaboration with Naropa's Art Therapy Department Studio group for brain-injured adults. She also presented at the Atlas Institute Seminar Tuesday Colloquium Series and was awarded a Gerald C. Bean Scholarship, as well as Colorado Music Relief Funds. Finally, Eng has been invited by Leon Gallery for a solo exhibition this summer for her work Iconoclashgiftsfeld.

Assistant Professor Erin Espelie was a virtual visiting artist at the Ruhr-Universität in Bochum, Germany, and in August at John Cabot University in Rome. Her film about yellow mealworms, Tenebrio molitor, showed on Australia's TV Science channel through the end of the summer months and her new documentary, Sacred Mountain, premiered in early September in Mumbai at the Indian Cine Film Festival. The Kontejner Collective also highlighted Espelie's art in Zagreb, Croatia. Finally, Espelie curated a show, Co-Terminous, at Union Hall in Denver that was open through Jan. 9, 2021.

PhD Candidate Brad Gallagher gave a presentation at the Artificial Creativity conference in Malmo, Sweden, on Nov. 19 and 20 entitled “Do GPT-2s Dream of Electric Poetry?" He was also selected for an Atlas B2 residency, to be held from Feb. 22 to March 5, 2021. In addition, Gallagher completed his first-year review!

PhD candidate Laura Hyunjhee Kim was part of the group show The Archive to Come at Telematic Media Arts in San Francisco.

Her solo exhibition, Living Lab, also opened in November at Clark College’s Archer Gallery in Vancouver, Washington. In addition to displaying projects online, she offered a workshop titled Feeling without Touching: An Archive of Feelosophic Artefacts from the Living Lab and collaborated with virtual visitors to create intimate "feelosophic artefacts" that explore and reimagine how we language our emotions in digital spaces. 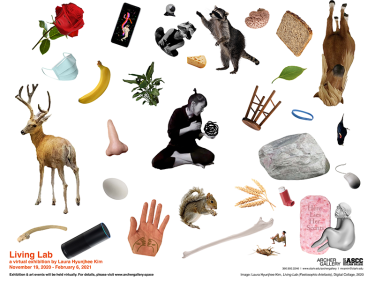 Kim's video, Cricket World, is included in the online, social VR, and in-gallery group exhibition The Archive to Come at Telematic Media Arts. Finally, her book, Entering the Blobosphere: A Musing on Blobs, has been reviewed on Rain Taxi.

PhD candidate Darija Medic participated in a debate on “the new normal” during the literary festival KROKODIL. She also participated in the Terms of Service Fantasy Reader workshop during the South Eastern European Dialogue on Internet Governance. Finally, she participated in Belgrade’s Innovation Week via a panel on "Future Narratives," speaking from the position of the affiliation with the Media Archaeology Lab as a small intervention in narratives on innovation.

Associate Professor and IAWP Faculty Affiliate Hanna Rose Shell's book, Shoddy: From Devil's Dust to the Renaissance of Rags, was published by the University of Chicago Press.

Last but not least, PhD candidate Biyi Wen presented a paper titled "Mapping Post-Reform Narratives: Hypertext Network as Literary Infrastructure" at the Youth Round Table as part of the Fifth-Annual Conference of Network Society, hosted by Institute of Network Society in China Academy of Fine Art in Hangzhou, China. The paper will eventually be translated and published in Chinese by INS.