For senior Lindey Hoak, college was all about mixing creativity with productivity.

Take her love of bullet journaling, which she uses to organize her busy schedule and document her range of interests, from lists of favorite movies, to new recipes and memories captured in polaroid photos. Or her frequent visits to Boulder’s Pearl Street mall, where, rather than just shop and stroll, she puts on performances with her violin.

"You should take every project as an opportunity to add something to your portfolio and make something that you are actually proud of.

After entering college as a Violin Performance major, Hoak craved yet another creative outlet. She found it by adding a second major in the design track of Strategic Communication.

The combination proved to be formidable. And in May, Hoak graduated as the Department of Advertising, Public Relations and Media Design’s William W. White Outstanding Senior.

Fellow CMCI student Tayler Shaw checked in with Hoak to discuss her various creative projects, her trip with classmates and professors to Paris and more.

TS: What are some of the most impactful projects that you worked on during your undergraduate years? 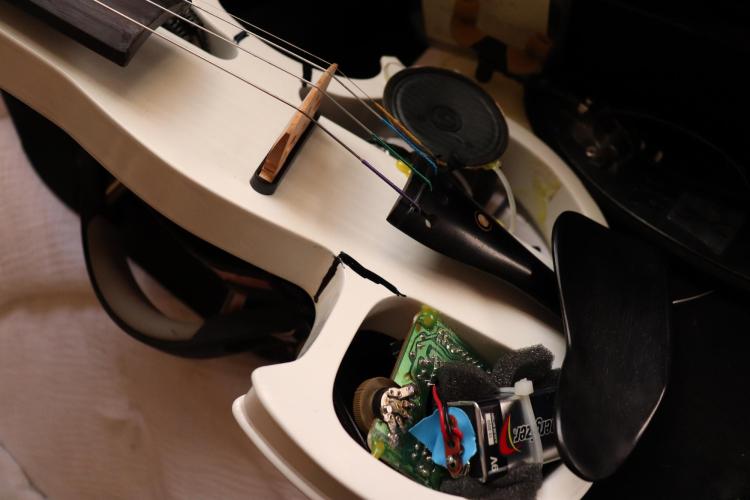 LH: The first one that always comes to mind is one I’m actually still working on. I took a class with Associate Professor David Slayden called Idea Industries Two. You spend the entire semester making a project and learning how to sell it. I decided to build my own electric violin. I love to play my violin, and I wanted an electric violin that had all the heavy equipment––all the electronics––built into the instrument. By the end of the semester, I had a working prototype.

Another example was my capstone class, which I took last spring, where we created a campaign for the company RovR. We were trying to sell these indestructible coolers, and they already had a video of bears trying to rip them open unsuccessfully. In a sort of last-minute shower thought, I decided that we should create a commercial where we’d dub over the bears with narration about how they couldn’t get the cooler open. We weren’t even required to have a commercial, but the RovR people loved it. I was so proud of it. The capstone class was a great end to the degree, because I finally got to take everything I learned and actually try to sell it to somebody.

TS: I read that you interned at Bhakti Chai. How did you first get involved in that and what projects did you work on?

LH: I found it on Handshake, the college’s internship hub. I knew I wanted to do an internship for my last semester of my senior year, and when I found that one I kept bugging them about it. I applied, and then I emailed, and then I think I emailed a second time. Because I’d tried their chai before and I really liked it.

They finally said, “Okay, we like the persistence. You can come in, have an interview.” That went well and they hired me right there. The first thing they wanted me to do was design recipe cards, and then we realized we just needed more photos of the recipes. So actually, maybe 50% of my job was food photography, which I definitely didn’t expect––but it was really fun. And I also did their newsletter every week.

TS: What was your favorite CMCI experience? 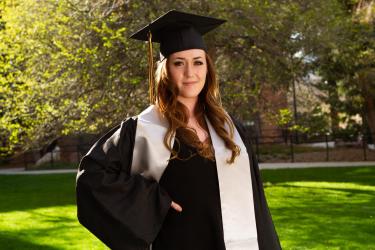 LH: I went on a study abroad trip to Paris for a month in the summer between my sophomore and junior years with Assistant Professors Jolene Fisher and Toby Hopp. I think there were about 15 of us, and we all flew to Paris and lived downtown by the metro for a month. We got to visit agencies and even went on a three-or-four-day side trip to Belgium, and to Brussels and Bruges. Getting to actually learn about international social media marketing––that was awesome.

TS: What are your greatest takeaways from your undergrad years in CMCI?

LH: That every one of the professors in CMCI is incredibly useful––especially getting to know them on a personal level. I learned that group projects are difficult but absolutely necessary. There were definitely a lot of those, but there were also plenty of opportunities to do something yourself and I felt like it was worth it to just go all in. You should take every project as an opportunity to add something to your portfolio and make something that you are actually proud of.

TS: What advice would you offer to other Strategic Communications students?

LH: I’m lucky that I have a dad who says all these really wonderful quotes. He always says, “Don’t create more hurdles between yourself and where you’re trying to get to.” I think we all tend to do that. Like, I can have so many of these projects I want to work on and then, as I start working on it and run into little hurdles, I can make a bigger deal out of them than I need to––or I can just push through it. Just do exactly what you want to do with your four years, that’s my advice.